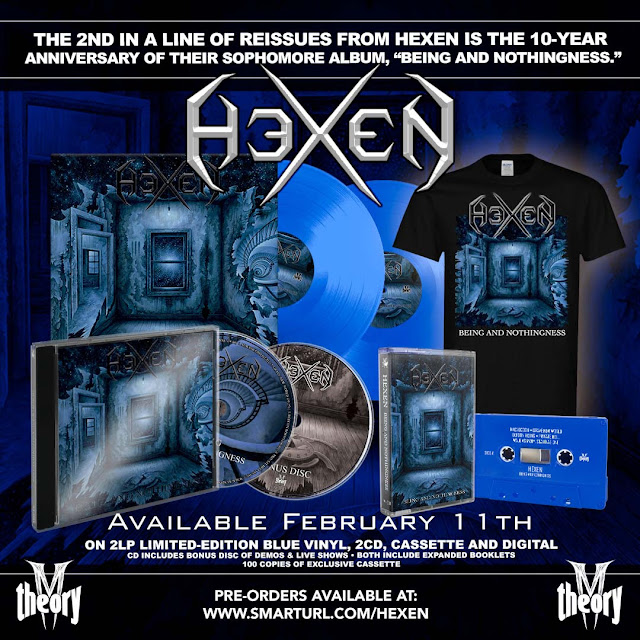 M-Theory Audio will reissue “Being and Nothingness,” the acclaimed 2012 sophomore album from California neo-thrashers HEXEN, February 11, 2022. The reissue is the second in a series of HEXEN reissues and remasters from M-Theory Audio, who released a reissued and remastered version of the band’s 2008 debut, “State of Insurgency” today, Oct. 15th.

“Being and Nothingness” saw the band continue evolving the combination of old-school ferocity, with a more progressive new-school technicality and dark and socially conscious lyrics that helped them stand out in the fiercely competitive Southern California thrash revival that birthed acts such as Warbringer, Fueled By Fire, Merciless Death, Bonded By Blood and Exmortus. Pre-orders for the upcoming reissue of “Being and Nothingness” – which include expanded packaging and personal liner notes available as a blue vinyl double LP, a 2CD with a bonus disc of previously unreleased demo and live tracks, and a blue shell cassette – are available now alongside the reissue of “State Of Insurgency” at www.smarturl.com/hexen.

Says drummer Carlos Cruz (Warbinger, Machine Head, Power Trip, Ohm), “We thank you all for the incredible response to our 2021 re-issue of “State of Insurgency” & to show our gratitude for your support, we’re bringing you its interstellar follow-up, “Being and Nothingness,” out of obscurity by celebrating its 10-Year anniversary with a 2022 re-issue on M-Theory Audio! Prepare your minds to enter the stream of unconsciousness with another round of 2LP, 2CD & Cassette release of HeXeN’s unique fusion of Extreme, Melodic and Progressive Thrash Metal!“

“Being and Nothingness” – originally released by Pulverised Records – saw original HEXEN co-guitarist Artak Tavaratsyan (also formerly of Exmortus) return to the band after a hiatus of several years, bolstering the foundation laid on the previous record by the shredding guitar assault of Ronny Dorian, the precise drumming of Cruz and the dextrous bass and searing vocals of Andre Hartoonian. The band’s second album – which featured cover art from renowned metal artist Kristian Wåhlin aka “Necrolord” (At The Gates, Dissection, Emperor) – was hailed by Metal Underground as “a roaring spectacle of glossy solos and intricate songwriting” and was praised as “one of the more impressive thrash albums” of 2012 by Sputnik Music. HEXEN disbanded soon after the release of “Being and Nothingness,” with band members turning their focus to academic and collegiate endeavours and Cruz joining Warbringer.

M-Theory Audio’s reissue of “Being and Nothingness” joins the now-available reissue of “State of Insurgency” by also including new liner notes by Hartoonian.

“Of course, I was jumping up and down moshing in front of the stereo in my room like I was 16 again the second I got the Vinyl LP of ‘State of Insurgency,’” notes Hartoonian. “Knowing full-well that I’ve heard my own work a billion times and thus must have a biased ear/brain that I can’t help. It wasn’t until a lifelong friend of the band (who totally is not an audiophile, and always argued against the hoopla over “analog” anything beating “digital”, and from whom compliments/praises about the band never, EVER came easy) texted me soon as her presale arrived saying, “right off the bat the vinyl sounds a million times better” which was when I knew that it wasn’t just me. If even the person who only ever gave me brutally honest feedback says there’s been a big improvement in the sound on the LP, that this REALLY IS the best we’ve ever heard ‘State of Insurgency’ sound.”

“Additionally, there isn’t a SINGLE audio version we’ve re-released the HeXeN catalogue on that doesn’t have something unique to the specific format. The 2CD version of ‘State of Insurgency’ comes with a bonus disc of 2 live sets while the bonus disc for ‘Being and Nothingness’ has a whole slew of behind-the-scenes extras featuring demos and live recordings. GRAB YOURS TODAY!”

HEXEN “Being and Nothingness”-era Lineup:

December 7, 2021 9
Bringing music to the Metaverse with Husl