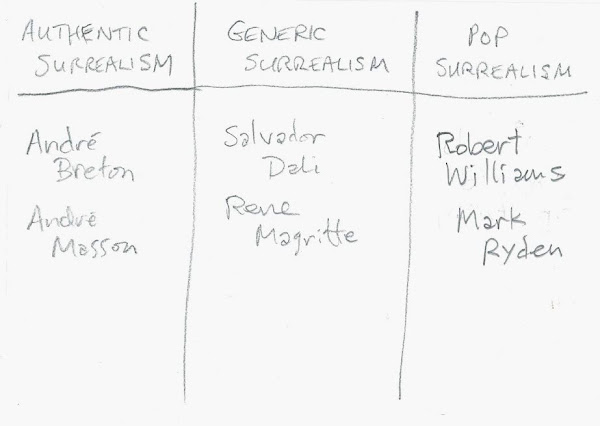 The term “pop surrealism” was coined by The Aldrich Contemporary Museum for their 1998 exhibit of the same name. This was the first time the phrase was ever used to describe a body of art work in a major museum exhibit. It is ironic to note that a term created by a highbrow art establishment, has since been taken up as the slogan for a wide spread body of work by unknown “lowbrow” artists.

Shortly before the Robert Williams, Juxtapoz, L.A. art scene took up the phrase as their brand name, “pop surrealism” was a real art show at a real art museum, written up in real newspapers and real art magazines. The show was not specific to a scene (like the L.A. art scene), nor was it trying to exhibit a “school” of artists. The Aldrich show was the first “highbrow” entity to pick up on a growing trend in contemporary art.

One of the artists in the 1998 Aldrich show, a veteran of the early ‘80s NYC club scene, a scene often thought of as synonymous with Basquiat and Haring, was Kenny Scharf. I like his quote from The New York Times article about “pop surrealism”… “Mr. Scharf calls his style Pop Surrealism. “A Surrealist is using imagery from the subconscious, or dream imagery,” he said. “My subconscious is full of popular imagery.”

If there was a way to describe “pop surrealism”, Kenny Scharf nailed it. Most people who throw the term around, and many of the self-proclaimed “pop-surrealists”, don’t know what Pop Art, or Surrealism, really is.

Remember, surrealism is a process; Surrealism is a specific early 20th Century art movement; and “surrealism” used as an umbrella term, refers to any paintings that look like Salvador Dali’s, Rene Magritte’s or Frida Khalo’s.

Pop Art is when artists in the late 1950s and early ’60s used both visual and production tactics from the world of print advertising. It wasn’t so much about “pop culture”, as it was about the production of pop culture, specifically advertising tactics, and modern printing techniques, such as photo reproduction methods. Like classic Surrealism, it’s not so much a look, but a way of thinking about making art.

Now if we go back to Kenny Scharf’s explanation, it seems like we are getting somewhere towards a proper art genre. If one is to engage in “pure psychic automatism”, aka surrealism, and the automatic outpouring of that person’s subconscious results in images drawn from pop culture, then maybe we can grasp a true process, and give it a name, “pop surrealism”, and not use it as some umbrella term for bad unknown contemporary art (aka “underground” art).

Using the term as an umbrella term, is like calling any noisy, unknown, poorly played rock music “punk”, as opposed to using it to refer to the real punk bands of 1977. Or like calling any abstract painting “abstract expressionist”, instead of referring to the real AbEx paintings from 1945-1960. In strict, real art world terms, Surrealism is a movement that started in Europe with Andre Breton and Andre Masson, and ended when the Nazis drove the artists out of Europe and into NYC, where in the 1940s their surrealist tendencies sparked the AbEx movement. In strict, real world art terms, Pop Art was a movement that started in London and New York in the late 1950s, and gave way in the late 1960s to installation art and conceptual art.

So it begs the question, is there, or was there, an official, “real”, Pop Surrealism movement, or is it a generic, umbrella term?

We see that more recently, in the post-Juxtapoz era, there are those who wish to use the term to describe a look, a visual style, as opposed to using it to describe a specific movement, or group of artists. When I think of “pop surrealism”, and the way most people today want to apply it, I think of artists like Robert Williams, Mark Ryden and Todd Schorr. Robert Williams is really more of a late 1960s peer of Robert Crumb, yet his work fits right in with the late 1990s L.A. Juxtapoz scene, and rightfully so, as he was a co-founder of the magazine. He would have used the term “lowbrow” however, not “pop surrealism”.

It is worth devoting a paragraph here to the idea of Lowbrow vs. Pseudo-Highbrow. Because I see the pedestrian view of “pop surrealism” as pseudo-highbrow, especially the type espoused by people like Kirsten Anderson in her book “Pop Surrealism: The Rise of Underground Art”, or Jon Beinart in his “Beinart Collective”. In their minds, “pop surrealism” has become a notion about technique, as opposed to a marriage of classic Surrealism and classic Pop Art. The Kirsten Anderson / Jon Beinart version of “pop surrealism”, is the notion that a person who can paint like Salvador Dali (photorealistic technique is used to render fantastic and impossible situations), and who infuses this Dali-esque technique with content derived from “lowbrow” culture, is the visual style indicator of a “pop surrealist”. This view confuses technique as being an indicator of highbrow status. A similar situation arises with, let’s say, prog rock. Rock music is lowbrow. When it is played by those with proper musical skills (Frank Zappa, Yes, King Crimson, etc), the musical skill does not elevate the work to a “highbrow” status, no matter how much the Prog fans want it to be so. It is still lowbrow rock music. Likewise, JRR Tolkien was an Oxford professor. Oxford, and its professors, are highbrow. But if one of them writes a series of fantasy novels, the fantasy novels are not highbrow. Fantasy “literature”, unless we are talking Greek mythology, is not highbrow, it is lowbrow. “The Lord of the Rings” is pseudo-highbrow. Another way to look at it is, just because a painter can display the chops to outdo the special effects of lowbrow Hollywood movies like “Inception” or “The Matrix”, does not elevate that painter to the status of the painters in major league, blue chip art museums and galleries.

Given that these LPs were blockbuster pop culture products, one could argue that this marks a proper moment in the art history books, lending some legitimacy to the art and artists we now think of as “pop surrealists”. Keep in mind though, these were pop music LP covers, not museum paintings. Lowbrow, not highbrow.

A highbrow contemporary artist is somebody like, let’s say, Takashi Murakami. Murakami could be classified as a “pop surrealist”, based on the look of his work. But Murakami is a major league, blue chip artist, he’s not “lowbrow”. In essence, the whole idea of lowbrow pop surrealism has “jumped the shark” as they say, with museum grade artists riding its back into the MoMAs, Mets, and Tates of the world. When the MoMA gave an entire show to film maker Tim Burton, in 2009, one got the feeling that the pop culture which inspired an entire nation of underground lowbrow artists, had reached out and grabbed the trophy for itself.

But let’s get back down to Earth. Back to a place where mere mortals toil over paintings, tattoos, posters, and comic books. A place where magazines like Juxtapoz magazine, or websites like Etsy.com, serve the everyday artists of the everyday world. In the pages of Juxtapoz, or in the Etsy shops, we can see an entire shift in contemporary “Sunday painters”, just like one can see in the major league contemporary art scene. When looked at this way, “pop surrealism” is much like impressionism, or abstract art. That is, a new way of making art that anybody can do. In other words, a revolution.

It definitely goes to show the incredible impact that both classic Surrealism and Pop Art have had on human culture. It makes sense. As humans take over more of the planet, destroying nature in the process, and replacing it with our own man-made crap, future generations of artists will be more familiar with a cartoon character, or an advertising mascot, or a movie meme, than they will be with a bird, or a flower, or a tree.

How to Build a Better Metaverse

What is the Indie Sleaze trend and is Gen Z adopting it?

How to Build a Better Metaverse

January 27, 2022 9
Are you passionate about journalism? Job ads and hiring editors sure want you to be

Are you passionate about journalism? Job ads and hiring editors sure want you to be