From the Nineteenth Century To The Present

A Discography Of CDs And LPs 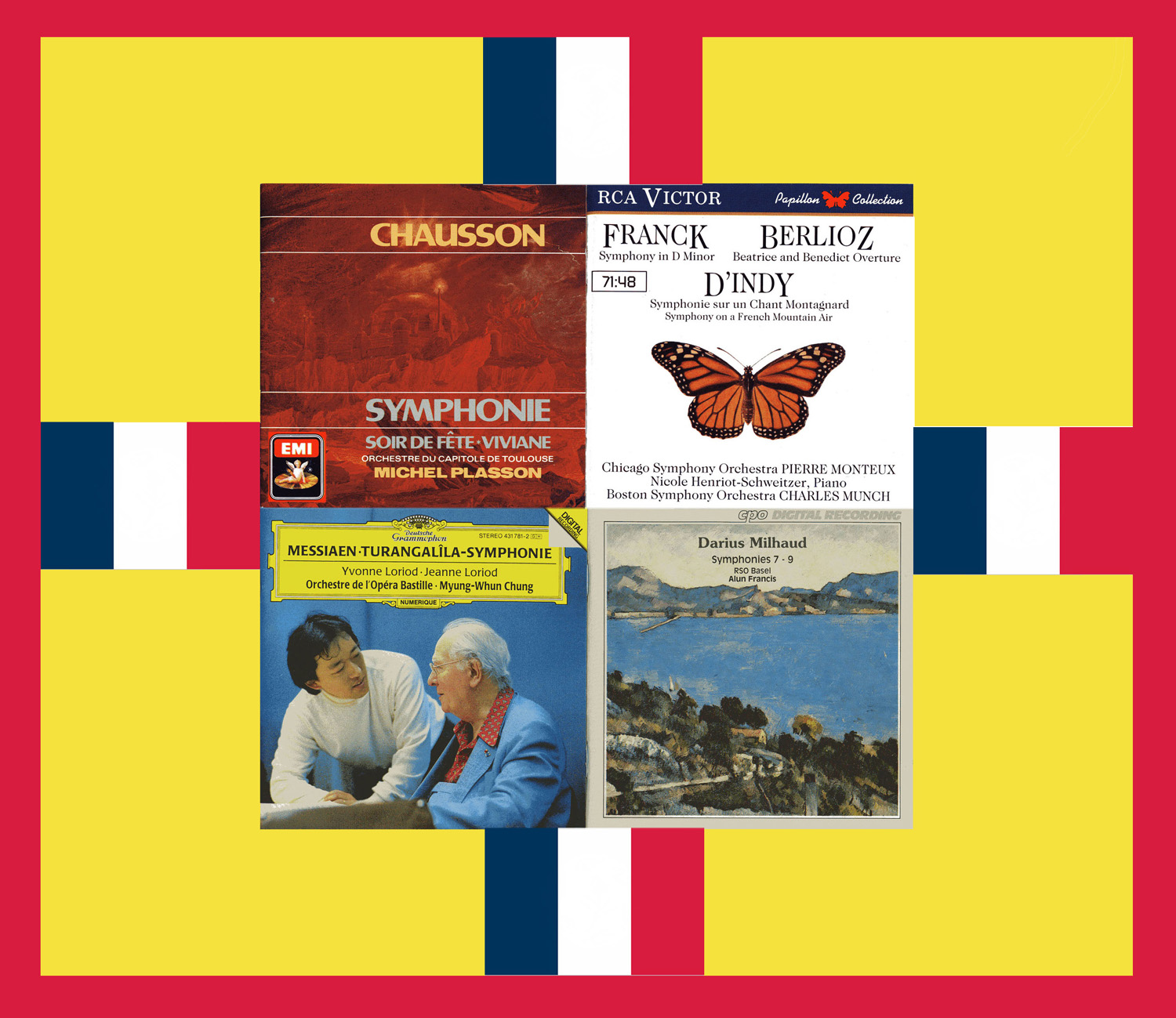 While not one of the backbones of musical culture as it
is in Germany, the symphony in France is an essential component
of its compositional achievement. The number of French symphonies
that are members of that exclusive club known as “the basic
repertoire” is few but since the advent of the 19th century,
French composers have produced a steady flow of important works
in this pinnacle of orchestral genres. It is the aim of this discography
to document all the recordings of French symphonies that have
been issued on CDs and LPs.

The composers included in this discography are those born in or
who came to live in France and wrote Symphonies from the beginning
of the 19th century to the present that have been recorded.. A
chronological structure has been used in order to show the progression
of symphonic works from the early nineteenth century up to our
own time. This chronology is based on the birth year of the composer
rather than the year a symphony was written. A composer index
is placed first so the reader can immediately go to any particular
composer. As in the previous discographies in this series, no
attempt has been made to list every release of every recording
of each work. There have just been too many reissues, especially
from the major labels, to make this feasible for many recordings.
Instead, what are listed is the most current issue the author
has located and the earliest release (if any on LP or CD) of that
particular recording. In general, multi-disc compendium releases
are omitted unless they contain a unique recording or the sole
modern reissue of a previously released performance.

The entry for each composer consists of two sections. First there
is a compact biographical paragraph that notes some essential
information such as place of birth, higher musical education (including
schools and prominent teachers), subsequent musical careers in
addition to composing, details of other symphonies that have not
been recorded and selective lists of other works for orchestra.
Compositional styles are not discussed in these paragraphs and
readers are referred to the bibliography where various reference
books that cover this subject are listed.

The second part of each composer entry consists of lists of his
or her symphonies that have been recorded and the various recordings
of each work. Symphony is defined here as any work the composer
has designated as such in its title including works called “sinfonia”
or “sinfonietta.” The works can be for full orchestra,
chamber orchestra, strings, winds, brass or chorus and orchestra.
For every symphony that has them, the opus number, key signature
and title are noted and the year of composition is stated for
all. The entries of the symphonies that have had multiple recordings
are listed alphabetically by the conductor’s name. (The one exception
to this is Lalo’s “Symphonie Espagnole” where the violinist
takes predcence over the conductor because of the nature of the
work.) Each listing of a recording consists of the following components
(if known): (1) Performers (in this order if all are involved
– conductor, soloists, choral group, orchestra), (2) Other works
on the recording. (3) Label and catalogue number and year of issue
and (4) If the recording is a reissue, the original LP or CD release
and its year of issue. Please note that the performers listed
are for the entry work and not necessarily for the works that
it is coupled with. Also, in most instances when an entry work
is included in a large collection (especially if most of the other
works are not related to the discography’s subject) the list of
couplings is not given but replaced by the title of the collection.

The symphony arrived in France during the eighteenth century.
It came at a time when French music was almost entirely dominated
by the opera. Gradually, however, instrumental music began to
find its place after the composer André Danican Philidor had established
concerts for this purpose at the Palace of the Tuilleries. Orchestral
by French and foreign composers were conducted by such distinguished
musician as Jean-Philippe Rameau and Anton Stamitz. The introduction
of the Symphonies of Franz Joseph Haydn onto the Parisian musical
scene was extremely influential and pointed the way for the symphony
to become an important component of French music.

This discography commences with the last Symphony written by the
Flemish-born composer François-Joseph Gossec as it is the first
19th century French Symphony that has been recorded. With the
exception of the very personal Symphonies of Berlioz, the first
half of the19th century was not a particularly fruitful time for
this genre. Things picked up after mid-century with Gounod and
Bizet and by the century’s last two decades the golden age of
French symphonism had arrived as exemplified by Franck’s Symphony
in D minor, Chausson’s Symphony in B-flat, Dukas’ Symphony in
C and Saint-Saëns’ “Organ” Symphony. This was followed
by an early 20th century afterglow best represented by d’Indy,
Ropartz, Magnard, Roussel and Honegger and an eventual decline
in the composition of symphonies with only Messiaen’s “Turangalîla-Symphonie”
and the pair written by Dutilleux as the only later 20th century
symphonies showing any signs of permanence in the concert hall.

Yet, as the following discography demonstrates, there is a rich legacy
of French symphonies that has been represented on recordings.
There are also a substantial number of French symphonies that
remain unknown, many of them, perhaps, rightly so. However, until
the listening public gets a chance to hear them we will never
know what we are missing.

The author’s personal French symphonies
want-to-hear list is as follows:

I have received a lot of help in preparing this discography.
First of all, Rob Barnett of MusicWeb helped eliminate a lot of
errors by proofreading the entire work. I am very grateful to
him as well as to Len Mullenger who has kindly hosted and prepared
my Discographies for the MusicWeb International website and has
patiently instructed me on the use of a software program that
has made it easier for me get my work ready for the internet.
Finally, the following people have given me some important information
that I could not find on my own and I just want to express my
sincere gratitude: Paul Brooks of the Barbirolli Society, Paul
Snook, Chris Howell and Hubert Culot.

Please note that all recordings listed are CDs unless specifically
designated as LPs.

Finally, as this resource is published online it can always be a work
in progress as the author has the ability to amend the work when
necessary with very little difficulty. A work of this type is
bound to contain errors and omissions as so much material has
been gathered from so many diverse sources. Therefore, I ask anyone
who reads this book and finds such errors or omissions to please
let me know at the email address (mherman@mindspring.com). I would be very grateful
indeed.

Because of the conversion of the discography to pdf,
linking to individual composers is not possible. We have kept the index
so that you are able to see who is included.

Clough, Francis F. and C.J. Cuming. The World’s Encyclopedia
of Recorded Music (including Supplements) in 3 vols. London:
Sidgwick and Jackson, 1952-57.

Many contemporary composers have their own websites and
others can be found on the websites of their publishers. There
are also websites for earlier composers and conductors that are
maintained by societies that promote their music and recordings.
These can be found by typing the composer’s name into any search
engine.