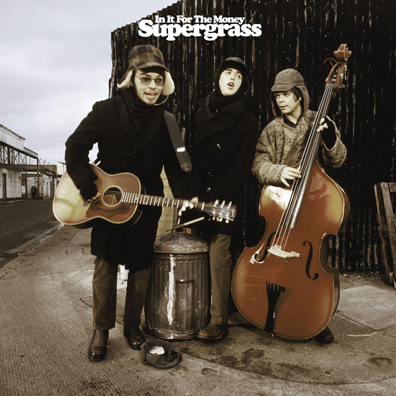 In It for the Money (Remastered Expanded Edition)

Here is the long-awaited deluxe reissue of what is many fans’ favorite Supergrass album, their 1997 sophomore LP, In it for the Money. Praised at the time by everyone from the NME to Dave Grohl (who had them open for Foo Fighters on the tour for 1996’s The Colour and the Shape and again in 2008 when Supergrass’ final album Diamond Hoo Ha came out), it’s seemingly forgotten now by many while other landmark albums from that year like Radiohead’s OK Computer, The Verve’s Urban Hymns, and Spiritualized’s Ladies and Gentlemen We Are Floating in Space have deservedly enjoyed numerous reissues and all-time classic status.

But while those are three of the very best records released in the ’90s by anyone, it should be notable that the astounding UK crop of ’97 also includes this fantastic album and others such as Teenage Fanclub’s career-best Songs from Northern Britain (they opened for Radiohead that year, too) that have garnered less praise and attention.

All that background aside, In it for the Money was definitely a leap forward in terms of songwriting, experimentation, and adding psychedelic flourishes to their hard-as-nails, but ultra-catchy fuzzy power-pop/pop-punk as perfected on their 1994 debut single “Caught by the Fuzz” and the rest of 1995’s debut album, I Should Coco. Just listen to songs like “Richard III” or the astounding “The Sun Hits the Sky” if you want proof of how potent this set still sounds.

The three CD set includes the album on disc one. Disc two features a set of demos, rehearsals, B-sides, and outtakes that help show how the the album ended up sounding the way it does. Disc three is all comprised of live material from a variety of sources, the bulk of it coming from a gig in Nottingham in January 1998.

It should also be noted that for vinyl fans who have long waited for a repress of this album (the only prior pressing is the very expensive and elusive 1997 original), there is a single LP version with a bonus 12-inch consisting of a remix and a bonus track as well. For an album this good, both would certainly be worth buying. (www.supergrass.com)