Jazz flautist’s electrifying 1961 performance gets a wonderful vinyl upgrade.Speakers Corner’s 180-gram upgrade is top-notch. The overall mix is strong, especially on the bottom end with the rhythm section. Stereo separation is very good (considering the “vintage” era of this recording). A listener can hear the glowing echo of the vibraharp and the crispness of Mann’s “C”. Even the drums (including the African drum) are distinct and not lacking in prominence. Martin Norman and Bob Slutzky’s stunning modernistic cover is eye-catching in 12” format. – Sound 4.5/5 Audiophileaudition

” Comin’ Home Baby” – that’s how the LP begins and that’s what catapulted it right into the charts. Not to one of the top places, but from this time on Herbie Mann was one of the superstars in Atlantic’s collection of jazz musicians. He was known as ‘our man with the flute’, and the critics in the early Sixties were full of praise for him. He became even more famous, and probably richer, through soundtracks and later on sometimes rather commercialised productions. Well, good for him. ‘The Man’ serves up jazz pure on this recording, made live at the legendary Village Gate club, which is no wonder considering the rhythm group that includes Ahmad Abdul-Malik and Rudy Collins. The composer of “Comin’ Home Baby”, Ben Tucker, also makes an appearance as a guest soloist before the two Gershwin numbers from “Porgy And Bess” offer a wealth of rhythm pure. On the cover text of the LP, Willis Conover, who hosted the Newport Jazz Festival as a sideline (older jazz fans will know his baritone voice from AFN broadcasts), describes in detail the ethnic background of the musicians who come from all over the world – from Romania to Puerto Rico. The three numbers are by no means commonplace. Perhaps a tasty flute cocktail would be a good description. This true rarity from Atlantic’s treasure trove in the early Sixties has long been marked down on the wish list of many fans and at long last it’s available again.

At the Village Gate is the album that first brought Herbie Mann to widespread popular attention, thanks to the inclusion of “Comin’ Home Baby,” which soon became one of the flautist’s signature songs. By the time of the record’s release in 1962, however, Mann had already been a bandleader for years, honing his pioneering blend of Afro-Cuban and Brazilian music with hard bop’s funky structures just under the public radar. As a result, At the Village Gate sounds more like a summation than a beginning. The nearly 40-minute album is a mere three tracks long, with an epic 20-minute version of “It Ain’t Necessarily So” taking up the entirety of the second side of the original vinyl. The highlight, however, is a stunning take on the standard “Summertime,” one that turns the Gershwin tune into an easy swinging, proto-bossa nova song that features a glorious extended solo by Mann over a conga beat. In its way, it’s just as revelatory as Miles Davis’ better-known recasting of the tune.

Selections:
Side A:
1. Comin’ Home Baby
2. Summertime
Side B:
3. It Ain’t Necessarily So 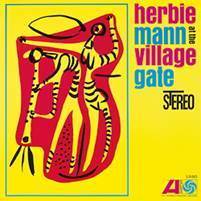 AAA 100% Analogue   This Speakers Corner LP was remastered using pure analogue components only, from the master tapes through to the cutting head 25 Years pure Analogue

MADE FROM THE ORIGINAL MASTER TAPES

Faithful Reproduction of the Original Artwork and Labels

All Licences and Mechanical Rights Paid

Are your records completely analogue?

Yes! This we guarantee!

As a matter of principle, only analogue masters are used, and the necessary cutting delay is also analogue. All our cutting engineers use only Neumann cutting consoles, and these too are analogue. The only exception is where a recording has been made – either partly or entirely – using digital technology, but we do not have such items in our catalogue at the present time

Are your records cut from the original masters?

In our re-releases it is our aim to faithfully reproduce the original intentions of the musicians and recording engineers which, however, could not be realised at the time due to technical limitations. Faithfulness to the original is our top priority, not the interpretation of the original: there is no such thing as a “Speakers Corner Sound”. Naturally, the best results are obtained when the original master is used. Therefore we always try to locate these and use them for cutting. Should this not be possible, – because the original tape is defective or has disappeared, for example – we do accept a first-generation copy. But this remains an absolute exception for us.

Who cuts the records?

In order to obtain the most faithful reproduction of the original, we have the lacquers cut on the spot, by engineers who, on the whole, have been dealing with such tapes for many years. Some are even cut by the very same engineer who cut the original lacquers of the first release. Over the years the following engineers have been and still are working for us: Tony Hawkins, Willem Makkee, Kevin Gray, Maarten de Boer, Scott Hull, and Ray Staff, to name but a few.

At the beginning of the ‘90s, in the early days of audiophile vinyl re-releases, the reissue policy was fairly straightforward. Companies such as DCC Compact Classics, Mobile Fidelity, Classic Records and others, including of course Speakers Corner, all maintained a mutual, unwritten code of ethics: we would manufacture records sourced only from analogue tapes.

Vinyl’s newfound popularity has led many other companies to jump on the bandwagon in the hope of securing a corner of the market. Very often they are not so ethical and use every imaginable source from which to master: CDs, LPs, digital files and even MP3s.

Even some who do use an analogue tape source employ a digital delay line, a misguided ’80s and ‘90s digital technology that replaces the analogue preview head originally used to “tell” the cutter head in advance what was about to happen musically, so it could adjust the groove “pitch” (the distance between the grooves) to make room for wide dynamic swings and large low frequency excursions. Over time analogue preview heads became more rare and thus expensive.

So while the low bit rate (less resolution than a 16 bit CD) digital delay line is less expensive and easier to use than an analogue “preview head”, its use, ironically, results in lacquers cut from the low bit rate digital signal instead of from the analogue source!

Speakers Corner wishes to make clear that it produces lacquers using only original master tapes and an entirely analogue cutting system. New metal stampers used to press records are produced from that lacquer. The only exceptions are when existing metal parts are superior to new ones that might be cut, which includes our release of “Elvis is Back”, which was cut by Stan Ricker or several titles from our Philips Classics series, where were cut in the 1990s using original master tapes by Willem Makkee at the Emil Berliner Studios. In those cases we used only the original “mother” to produce new stampers.

In addition, we admit to having one digital recording in our catalogue: Alan Parsons’ “Eye in the Sky”, which was recorded digitally but mixed to analogue tape that we used to cut lacquers.

In closing, we want to insure our loyal customers that, with but a few exceptions as noted, our releases are “AAA”— analogue tape, an all analogue cutting system, and newly cut lacquers.

Audiophile Vinyl – Made in Germany  For over 60 years the family business in the third generation of the special personal service and quality “Made by Pallas” is known worldwide. Our custom PVC formulation produces consistently high pressing quality with the lowest surface noise in the industry. Our PVC complies with 2015 European environmental standards and does not contain toxic materials such as Lead, Cadmium or Toluene. Our vinyl is both audiophile and eco-grade!

January 17, 2022
The ten most popular dog breeds in the UK, from large to small – a complete list. » Brinkwire

January 17, 2022
The Detroit Cobras singer’s death announced by her heartbroken bandmates who pay tribute to frontwoman

January 17, 2022 4
An Obsessive Listen to a Twenty-Five-Year-Old Album