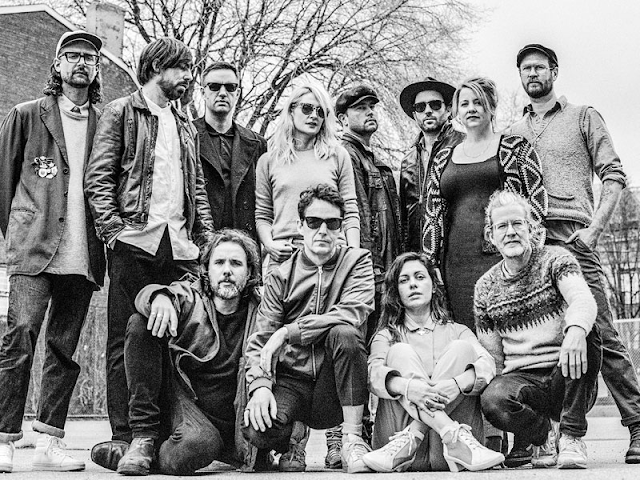 Broken Social Scene is a Canadian indie rock band, a musical collective including as few as six and as many as nineteen members, formed by Kevin Drew and Brendan Canning. Most of its members play in various other groups and solo projects, mainly in the city of Toronto. These associated acts include Metric, Feist, Stars, Apostle of Hustle, Do Make Say Think, KC Accidental, Emily Haines & The Soft Skeleton, Amy Millan, and Jason Collett.

The group’s sound combines elements of all of its members’ respective musical projects, and is occasionally considered baroque pop. It includes grand orchestrations featuring guitars, horns, woodwinds, and violins, unusual song structures, and an experimental, and sometimes chaotic production style from David Newfeld, who produced the second and third albums.

Stuart Berman’s This Book Is Broken (2009) covers the band from its inception to its critical acclaim.[5] In 2010, Bruce McDonald made This Movie Is Broken, a movie about the band’s Harbourfront show during the 2009 Toronto strike.

The collective and their respective projects have had a broad influence on alternative music and indie rock during the early 21st century, in 2021 Pitchfork listed the band among the “most important artists” of the last 25 years.

Drew and Canning’s material at the time was almost entirely instrumental, so they brought together musicians from the Toronto indie scene, the album contributors as well as Andrew Whiteman, Jason Collett, and Metric’s Emily Haines, to flesh out their live show with lyrics and vocals. Over time, the band came to include contributions from James Shaw, Justin Peroff, John Crossingham, and Stars member Amy Millan.

All of the musicians from the live show joined Drew, Canning, Peroff and Spearin to record the band’s second album, You Forgot It in People. The album was produced by David Newfeld and released on Paper Bag Records in October 2002 and won the Alternative Album of the Year Juno Award in 2003. The album also included musical contributions by Priddle, Jessica Moss, Brodie West, Susannah Brady and Ohad Benchetrit, but these were credited as supporting musicians rather than band members. On the supporting tour, the core band consisted of Drew, Canning, Peroff, Whiteman and Jason Collett, along whichever band members were available on each show date.