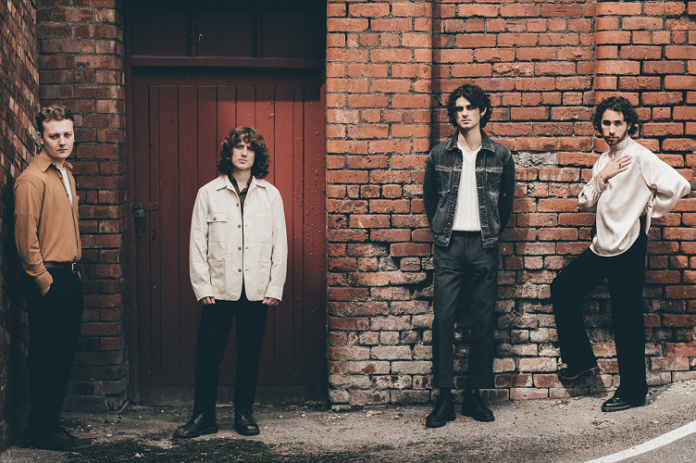 With an extensive UK headline tour fast approaching, Manchester indie-outfit Fuzzy Sun today unveil the defining project of their transition into a new era, the six-track EP, ‘Since The Dog Died’. With the release comes the band’s third single of 2021, ‘China Pearl’.

Inspired by the works of Virillio and Baurdrillard, the new cut is about the loss of meaning in society due our culture of technology and speed, how we are living in the hyperreal and frontman Kyle Ross’ fears in what little grounding we have left.

“Musically we wanted something quite aggressive, so we used processed drum machines combined with big distorted riffs.” tells Ross. ” We almost wanted it to sound electronic and mechanical which again relates to the subject matter of the tune. We experimented with a lot of soundscapes, and vocoders, using reversed guitars and a lot of delay pedals rather than using synths which was a lot of fun in the studio.”

Fuzzy Sun’s latest collective effort ‘Since The Dog Died’ serves as a continuous piece of music, with an overriding narrative arc which seamlessly ties each of its six tracks together. Across previous singles ‘Fake It’ and ‘Morning Light’, and the newly unveiled ‘Time Out’ and ‘Moviestar’, the quartet feel their way out of a period of disillusionment and into a brand new era fronted by unabashed euphoria, cinematic textures and classic indie-rock flare.

Speaking on ‘Since The Dog Died’, Kyle offers: “The EP stands as a new chapter for the band, mixing elements of rock, pop & electronica into our own sound. There is a heavy cinematic influence in our music, aiming to create rich soundscapes. The EP explores themes of depression, longing, disillusionment, hope, and even the philosophical. Lyrically, I think it’s a snapshot of the inside of my mind at a very specific point in time.”

After a quick start on the scene that saw tours with major UK artists and their first run of European dates, sold out headline shows at Manchester’s Gorilla, Academy 3 and London’s Camden Assembly – Fuzzy Sun, tipped by everyone from NME’s 100 List, The Line of Best Fit, CLASH, DORK, Earmilk, Gigwise, BBC Radio 1, BBC 6Music, Radio X and Spotify’s New Music Friday UK and Hot New Bands playlists are tackling 2021 with boundless energy and an unstoppable ethos.

Following the release of their new EP, the bandwill play a full UK headline tour in December; including a hometown headline show at Manchester’s Academy 2 on Friday 10th.

Tickets are on sale now.

Since The Dog Died – Tracklisting: