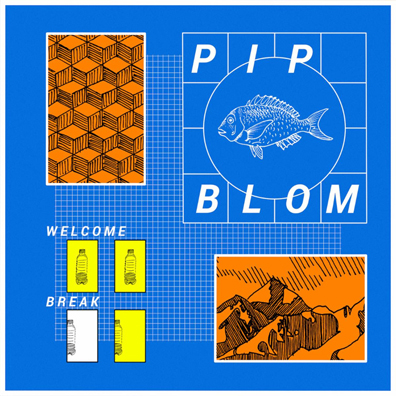 Inspired by life on the road before COVID struck, Blom wrote 20 songs over three months and then selected her favourite 16 to take the studio for the band (which includes her brother Tender Blom) to work on. Self-produced and recorded over three weeks at Big Jelly Studios in Ramsgate UK with engineer Al Harle, it’s an album that doesn’t deviate too much from the Pip Blom template, because, well, why would they? There aren’t many artists around who can play this style of music and make it sound so fresh and effortless.

That being said, it’s not all sun-kissed chiming melodies, there’s certainly light and shade and on occasion even a slight undercurrent of post-punk angst. For example, “Not Easy to Like” has a darker vibe and perhaps a hint of the driving angular repetition of Eton Crop, which was the former band of Erwin Blom, Pip and Tender’s dad. (Eton Crop were favorites of BBC DJ John Peel, playing five Peel Sessions back in the day.)

Amongst a myriad of highlights, there’s the gloriously bittersweet “Holiday,” which ranks as one of the best songs they’ve written, and then there’s the wonderful wrong-footing single “It Should Have Been Fun,” with begins quite gently reflecting on a relationship gone awry before unexpectedly pivoting and cleverly changing the whole focus of the song. “You Don’t Want This” and “Keep It Together” are both soaring melodic slices of indie/Britpop, which, whilst not reinventing the musical wheel, still provides a refreshing and indeed “welcome break” from the tsunami of bafflingly popular yet incredibly artless retrograde indie that currently stalks the UK charts. Recent single, the evocative “Different Tune,” demonstrates Pip’s ability as a songwriter to craft sophisticated pop songs exuding tender beauty, whilst album closer “Trouble in Paradise” seems to combine many of the themes previously addressed and seeks a resolution of sorts.

It’s an album that provides a deft mix of happy/sad songs that run the full gamut of emotions from euphoria to anger to the more reflective and wistful numbers. Or as Pip, herself, says: “It’s not sugar-coated-happy pop…they’re more like Titanic pop songs.” (www.pipblom.com)