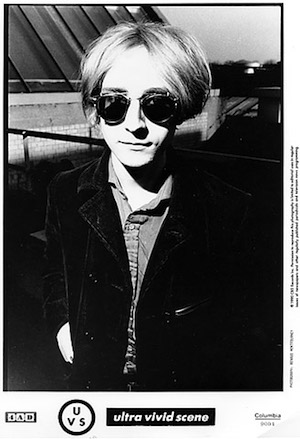 The story of Ultra Vivid Scene (or UVS as they were often known) is the story of their leader Kurt Ralske. Born and raised in New York he studied at the Berklee School of Music in Boston but was drawn into the no-wave scene of the late 70s. He became guitarist in the band Crash, led by Mark Dumais, who moved to London in 1985 to record a number of singles and a solitary album before splitting up. Crash were very much part of the mid 80s indie scene, indebted to the 60s but with a dark heart, songs like Don’t Look Now and Almost hid secret desires within a hushed strum of minor key jangling guitars. While in the UK Ralske absorbed the underground music scene – the feedback and fuzz of the Jesus and Mary Chain, the dark psychedelia of Spacemen 3 and Loop – and was signed as a solo act to 4AD Records, most notably the label for the Cocteau Twins and Dead Can Dance, but by 1987 branching into an emerging strand of American indie rock created by Throwing Muses and the Pixies. Ralske returned to New York in 1988 to record his debut album.

Back in the late Eighties, outlets for music on TV in the UK were few and far between. “The Tube” was forcibly shut after Jools Holland’s live to air f-word during a Friday afternoon Channel 4 ad break in 1987. “Whistle Test” sort of disappeared the year before so the presenters could concentrate on Q Magazine. There were the mainstream shows like “Top Of The Pops” and “The Roxy” (ITV trying to do TOTP and failing), and “The Chart Show” would randomly show intriguing videos on Saturday mornings. There was even Tony Wilson’s late night arts show “The Other Side Of Midnight”, full of warped Manc legends (but they weren’t at the time) like Happy Mondays and Stone Roses. But the best shows for music were on BBC2, under the DEFII banner. “Rapido” was fronted by motor mouth Frenchman Antoine de Caunes but had good features about the emerging indie scenes and factions. “Snub TV” was presenter free but jammed full of videos and segments, mostly specially made for the show which showcased the best bits of what was happening within the Melody Maker and NME.

One show in late 1988 featured a band I had read about but not actually heard – nothing new in those days. The band was called Ultra Vivid Scene and the song was called Mercy Seat. The video and the song felt like they were moving in slow motion, a primal drum beat, a distorted bass line urging the song forward, some lightly psychedelic guitars and a curiously fey vocal full of religious references to mercy, release and fire. I was smitten and hurried to my nearest HMV to buy the band’s debut album which had just been released. It seemed I wasn’t the only one; that single TV appearance sent their self titled debut album into the indie album charts. Although a four piece band had appeared in the video (and the sharp eyed will spot a pre-fame Moby playing bass), the album itself was written, played, produced and engineered by Ralske himself. I hope someone made the tea in the studio for him. As such the album has a singular vision. Opener She Screamed was a speedy rush, almost tripping over itself in its eagerness to express the feelings of a girl having her first taste of the drug Ecstasy (“When she ate half a nightmare she could see in the dark”). The music itself has an edge too; a hailstorm of feedbacking guitars mixed into the middle distance, fuzz and noise and over the top Ralske adding his slightly fey vocals. Over the next few songs Ralske sets out his stall of ideas – songs about sex, religion, death, sadomasochism, the balance of power in relationships – all the usual happy pop music subjects. Yet the songs aren’t dark, industrial noisescapes, there is always melody and structure. There are two songs entitled Lynn-Marie, #1 being a homage to Suicide (the band, not the act), #2 being a pure guitar pop delight, and both looking at the same relationship from different viewpoints. Side two of the album drifts by in a mid tempo narcoleptic haze, one of the highlights being Bloodline, slide guitar adding a uneasy countryish tinge to the music. The album gained a cult following in the UK and America, and promised great things for the future.

In 1990, Ultra Vivid Scene issued their follow up album, Joy 1967-1990. Ralske explained the LP title as being “Like an inscription on a gravestone”. This time he actually had a band around him, but it was still his vision and it was a curious vision too – the music was mostly quantised and sequenced using primitive (by our standards now) computer software, leading to a strange sound of a four piece guitar combo with the precision of technology. But it worked wonderfully. On the surface the album is a precise compact selection of guitar pop, but scratch underneath and the songs deal with a similar set of ideas as the debut – more suicide, dependency, control, submission, despair. The single Staring At The Sun was a glorious slice of tunefulness; guitars shimmer and shine and Ralske sings in his distinctive half whisper of “an accident in progress, the smell of burning hair…”

On Special One Kim Deal takes a day away from the Pixies to add a vocal to what almost seems a tribute to September Gurls by Big Star (watch her give Ralske a slap in the video too). The quieter material on side two of the album is just as good; Extraordinary is a beautiful mid tempo hymn to someone “not quite like all the rest” while The Kindest Cut mixes real viola with mellotrons and twinkling guitars. It’s a very consistent, highly enjoyable album as long as you don’t take the lyrics to heart.

There was another two year gap until the third UVS album entitled Rev, and now there was a real sea change. Ralske was now fronting a three piece band – his guitar plus bass and drums – and any artifice or electronic trickery was abandoned, this was the sound of a power trio playing as live as possible. If anything, the album was too organic and by abandoning the precision tooled streamlined sound of Joy the band stretched out; song lengths extended beyond the five minute mark as the threesome jammed on the songs. Sometimes it worked and sometimes the album meanders, particularly in the middle section. The opening trio of Candida, Cut Throat and Mirror To Mirror are concise pop songs, with the latter starting to grow strange at the end as a string quartet add drama while the band flail away (particularly the drums in the final minute). The two longest songs, Medicating Angels and Blood And Thunder channel Led Zep crunch with quiet loud dynamics to great effect, and the album closer This Is The Way would be perfect if it wasn’t obliterated by 78 rpm surface noise and EQ’d accordingly. An edited version of Blood And Thunder was issued in early ’93 as a single backed by a respectful cover of Crash’s Don’t Look Now, a tribute to Mark Dumais who had passed away the previous year. Then quietly Ultra Vivid Scene stopped.

Kurt Ralske moved from the music world into the art world. He created installations and art works, studied and lectured and became well known within that rarified world in New York. His CV – available on his website – is rather impressive. The likelihood of a return to music is remote, maybe it was an art project before he moved on to what he does now. Whatever, Ultra Vivid Scene left behind three distinct albums of often excellent music and are well worth investigating or revisiting.

Rob Morgan writes about the music he loves for a number of websites including Everything Indie Over 40 and his own blog A Goldfish Called Regret – he also creates podcasts. He tweets @durutti74.

May 19, 2022 2
NBC Poll Shows 1 in 5 Americans Have Invested or Traded in Cryptocurrency