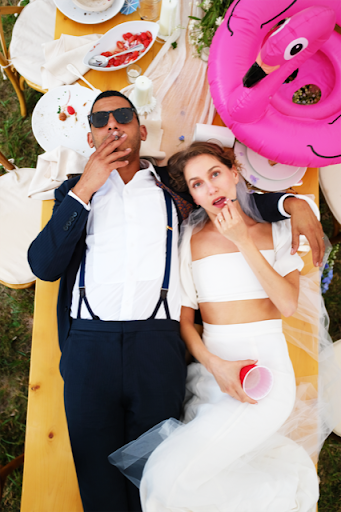 December. A time for holiday cheer. Kitsch knitted jumpers. The constant ring, ring, ring of sleigh bells across the radio waves…  Or not.

“Our December” is the latest single from DRUG COUPLE. A record that invites you into their kind of December.

A single that blows smoke rings right through the festive season, “Our December” finds Vermont’s most laid-back duo bidding a lively, if lethargic, farewell to just another year we’d probably all rather forget. As the Couple explain:

“Our December is a rather ambivalent meditation on the end of any number of things….Of a prime, a relationship, the world.”

Coated in the kind of gritty, lo-fi fuzz you’d expect to find on a classic Wedding Present or Dinosaur Jr cut, rather than the insipid jingle-bell jangle that most other Christmas records will be opting for this month; Drug Couple shirk the seasonal schmaltz to send 2021 packing with a rousing slacker-rock anthem for the end of days.

“After doing our last few projects piecemeal in the studio we were excited to track some rockers straight to tape in the barn and that’s what this one is.” says Becca. “Classic 80’s/early 90’s indie-rock with a little distorted organ added for our obligatory Yo La Tengo nod. The mix was informed by Sonic Youth’s ‘Dirty’….which is definitely NOT the best Sonic Youth album.”

Drug Couple is Miles and Becca Robinson. They used to be a “Brooklyn band”, until they moved to the Vermont countryside. They got married, grow marijuana, like country and American indie rock, and don’t particularly miss the city.

They left NYC on Friday, March 13th, 2020 for a wedding planning weekend in the sticks. Two weeks later they found themselves unemployed, in the middle of the woods, with a whole lot of time on their hands. In a two-hundred-year-old barn set amongst the rolling pastures of the grounds they now called home, they built a studio and named it “Freelandia”. It’s there that they laid down “Our December“, along with a peach of a single called “Lemon Trees“, and as a matter of fact, a whole goddamn record too… On 28th January 2022, Drug Couple will release ‘Stoned Weekend’.

Wearing a country-skewed American indie/rock sound that fits as comfortably as a favourite jacket and has long since cared what other people think of it, Drug Couple dress-up a debut offering that’s as cool and classic as it is languorously loose and laid-back.

While ‘Stoned Weekend’ isn’t so much a departure from Drug Couple’s first two EPs (‘Little Hits‘, 2019, and ‘Choose Your Own Apocalypse‘, 2020), it’s an example of what a band can grow into when given the space, both artistically and literally, to expand. When they absconded from their city life, solitary walks in the forest replaced crowded bars, and sprawling pastoral scenes gave way to heady songs best enjoyed blasted on car speakers instead of through headphones on the subway. With their new way of life filtering into the music they made, ‘Stoned Weekend’ is the sound of Drug Couple living the good life and showing it.

Produced in the capable hands of Miles Robinson himself, the LP showcases the understated talents of the band as much as it showcases their (perhaps commercially misguided) desire to make the kind of independent music they want to make. A world away from the bedroom-produced Billie Eilish-inspired sad-girl “pop but not” entries of today; it’s a collection of barn-produced blasts from a couple who get a kick out of alternative music, almost as much as they do each other’s company.

Like that holiday for the head you never knew you needed, expect to lose yourself in a dream-like haze of hash, love and languid sounds when the Drug Couple’s ‘Stoned Weekend’ descends in 2022.