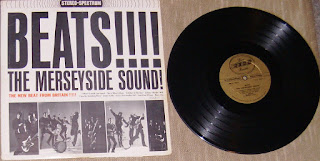 Unknown-ness: I’ve never heard of these guys specifically, but all signs point to a generic Beatles rip off, if they do not have any credit of their own. And to my knowledge, they don’t, but I don’t know much about the genre of music surrounding the Beatles. Just from the cover, they are obviously trying to gain fans and sales from the now iconic imagery the Beatles used. This is an odd record, where there is no back or bio about the band at all: just ads for other records.

Album Review: After doing a little research, I discovered a whole bunch of things, but nothing concrete, thanks to the fact that there is no info printed on the packaging. Understand that with the legions of Beatles fans comes mass speculation and rumors about other rip-off bands from the era. Some of the theories suggest that this record is from a Liverpool based band called the Liverpool Beats. Others suggest that this is actually a record featuring Billy Shepherd of Billy Pepper and the Pepper Pots. Some advise that this is an American Beatles-stylized version produced out of a garage in NJ. Some say that Lou Reed is in one of the pictures on the cover, but not necessarily in the band. Some say that this album was repackaged and reproduced with the same track listing 3+ different times with 3+ different versions of the cover. And it has a large span of critics that say anything from “It ain’t that bad” to “this is horrible.”

“I Want to Hold Your Hand” is obviously a cover of the Beatles poplar song. As if it were a reference/map key to the entire album, it says “Ok, you know this song, and here is what we do with it. Interpret the rest of the album with that comparison” It begins musically comparable. But the vocals are quite different. In their own right they are a little more brash, and “ghetto” not as smooth or English as the Beatles. It has the same back beat, and well, there is no need really describing the song. It is good, and they don’t ruin it, but it is not quite the same. I could see how people might think (and that it might be true) that these guys were not English.
“This Is What I Mean” kind of sounds like Alan Partridge purposely mauling a Beatles style song. The song is pleasant and has all the characteristics of the Liverpool sound: jangley guitar, near-surf percussion/bass beats. But the vocals are more aggressive than what the Beatles offer.
“Tell Me I’m The One” issues the typical theme of the era’s songs: questioning love, and the beats are all upbeat, happy and jolly. But the song is one dimentional, and does not have the passion that made the Beatles famous.
“Joshua” is a near-psychedelic version of “Joshua Fought the Battle of Jericho.” But they dropped out many of the catchy melodies from the traditional folk song, and left it a flat mess. And the melodies that they add/change don’t seem complimentary to the song, or even their rendition of it.
“Maybe I Will” features some Ohh-wop-doo-wop back ground fillers, which don’t really fit in very well. But the verse’s melody is fun to follow along with. This borders between slow dance ballad and poppy dance hit…I’m not sure what the kids would be doing to this song out on the dance floor

“I Saw Her Standing There” is also a cover of the Beatles popular hit. The song doesn’t get past the first verse, and his voice breaks. The harmonizing on the held note of “miiiiiiiine” seems to falter from fatigue. The song itself is obviously fun, bouncy and good, and they don’t necessarily butcher it, so it is a descent cover. The vocals (aside from the initial crack) are strong and aid the song in its optimistic tone.
“Seems To Me” is more along the lines of a slow Beach Boys ballad, with surf-inspired Oooo-weeee-ooos and the overall oceanic musical production.
“Got to Get Another Girl” is a fun original with tempo changes and breaks and a rollicking melody. It is a continuously building song with quick deliveries in its musical flow. This is probably the best original song the have on this record so far.
“Your Kind of Love” sounds like it lacks the energy and confidence it would need to be a hit. The nasally held notes never launch into the next verse as powerfully as they could.
“There I Go” seems like it will start out slow, but it picks up into a gently head nodding song. There are a few places where they let the music play out without vocals, but not much, most of these songs are steady sung tunes. This too feels like a beach/surf number, mostly because of the harmonized, multiple layered lead vocal echoes like it is sung in a cave.