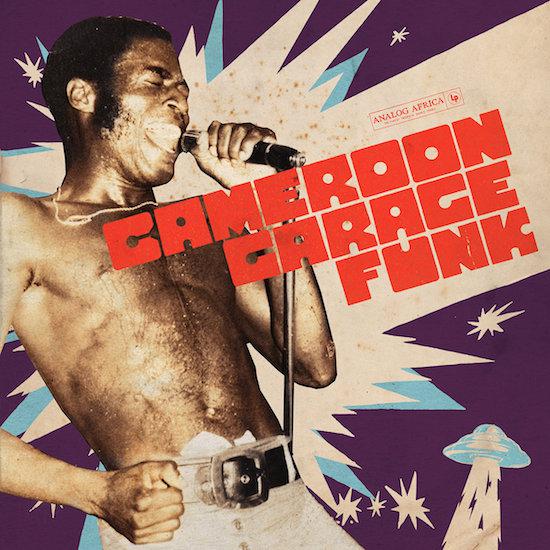 The title of Analog Africa’s latest compilation manages to give you a spot-on idea of what you’re going to get, while simultaneously leading you astray. It’s that attributive noun in the middle, really. People have talked mistily about ‘garage’ bands as a broad concept for maybe half a century now – and it was by definition a thing of the past when the Nuggets collection, from 1972, threw the idea out there – and in that time, like basically every musical genre or grouping that ever took hold, it’s been appropriated, misattributed and diluted until it’s scarcely identifiable.

As I say, that’s the price of recognition, not much point complaining about it: 20 years ago, when the very well-heeled Strokes’ very professionally recorded debut album was held up as an avatar of ‘garage rock’ in the wider imagination, it was kind of irksome for heads, but no-one died or anything. The term has always been a dually-functioning one as regards social signifiers, in any event: the idealised American garage bands of the 1960s played in the garage because they were kids who couldn’t afford actual studios, and because they came from middle-class families with sufficiently equipped houses.

Cameroon Garage Funk’s sleevenotes, though illuminating, don’t go into enough detail about the featured groups for us to make many conclusive statements about their backgrounds, let alone whether their family homes had garages. They do however describe a church in Cameroon’s capital, Yaoundé, which had some basic studio gear and an employee willing to record bands on the downlow when the priests were elsewhere. For a few years in the 1970s (all but one of these songs were recorded in that decade), this was the most viable way for the country’s musicians to commit themselves to tape, and accounts for the bulk of what Analog Africa’s Samy Ben Redjeb has selected here. All done live into a single mic, too, and when I say you can often tell it’s said with high admiration: this music, from before I was born on a continent I’ve never visited, buzzes raw enough to have me feeling like I was in the room shuffling clodhoppingly. That’s the nub of the garage mindset, no?

This album, like everything Analog Africa (among many other archive labels) releases, is closely tied to the collector scene – you can’t very well not be if you want to do this properly. Redjeb, a Tunisian living in Germany, prefaces the various band profiles by recalling how he got into Cameroonian digging, actually finding the 45s comped here in Niger, Benin and Togo before entering the country in question. Most of them were released by a label called Sonafric, based in Paris but specialising in pressing contemporary African sounds. For a country that barely had a functioning music industry, a decent amount of sides were cut in 70s Cameroon – Manu Dibango accrued a global profile at the time while being the proverbial iceberg’s tip – but they’ve not been given retrospective attention like the output of other western African nations, Nigeria and Ghana especially. Analog Africa, to their credit, have bucked this trend before, issuing the brief mid-70s discography of Hamad Kalkaba and a compilation of disco-influenced makossa from the late 70s and early 80s.

Makossa and the older bikutsi, both rhythm-forward native styles, are germane to Cameroon Garage Funk without featuring on it per se. Los Camaroes are represented here by both sides of a 1973 single, and had already built a rep as a versatile nightclub house band by then; Messi Martin, their guitarist, has over time become synonymous with ‘modern bikutsi’. Here, ‘Ma Wde Wa’ is a mild outlier, more like soukous than the rockist abandon of many other acts featured here, but with its sprightly melodies dusted in amp fuzz and afforded some bizarrely ‘off’ drum fills, you can see what Redjeb heard, so to speak. B-side ‘Esele Mulema Moam’ showcases their harder side, though: vocal yawping a la James Brown, who we’ll return to, meets with a rolling-stock bassline and chicken-scratch guitar.

A surf-style guitar gives way to a wild perversion of Latin jazz, before being brought back again, on Charles Lembe Et Son Orchestra’s ‘Quiero Wapatcha’, a song actually dating from 1964 (Lembe died in 2019 aged 81, likely making him the most venerable musician featured here). Given that this compilation is otherwise laser-focused on the following decade, I’m choosing to believe that Redjeb included it for no other reason than it rips. It’s also available on another Afro-specialist compilation, by Honest Jon’s; I daresay licensing this stuff properly is an arseache, but also think it would have been preferable to give prospective buyers stuff they almost certainly didn’t already own. Being more charitable, there are some true obscurities featured here, not only to latterday collectors but, it seems, Cameroon scenesters of the era, with Redjeb’s biographical hunting turning up squat.

Damas Swing Orchestra’s ‘Odylife’ has also been comped before, on an Africa Airways set from a few years ago, but the Cameroon Garage Funk liner notes simply state “no information” with an implied shrug. While not giving the impression of being intentionally mysterious, they cultivate an eldritch atmos in their 140 seconds here. A sample of a large, cheering crowd is intermittently inserted into a tambourine-shaking jazz shuffle whose title is uttered in haunted tones. Then there’s this collection’s other “no info, soz” act Jean-Pierre Djeukam, whose ‘Africa Iyo’ opens with seven seconds of untethered, perhaps malfunctioning electr(on)ics before the actual tune starts. Good gravy, it’s quick! In fact, if you can find a higher tempo Afrofunk tune I’ll… be grateful for your valuable service, is what. A regrettably anonymous band chops riffs like the Meters and honks JBs horns, but with the foamy fervour of certain UK bands who were, at the time of this 7-inch’s release in 1978, just starting to make a meal out of punk and funk (Gang Of Four, most prominently). I link up these names in a spirit of celebration: of how cool it is that people, or groups of people, can have highly similar flashes of inspiration while being unaware of each other’s existence.

As with a lot of music that left a scant paper trail, there’s lots of fun to had trying to figure out who exactly inspired these performers, with the bonus of it being almost as satisfying not to know. Andre Destin Ndenga was a saxophonist with the ability to pick up any other instrument, and who incorporated a Cuban influence into his music from the 1950s onwards. That’s evident on ‘Yondja’, recorded in the late 70s with Les Golden Sounds – the official ensemble of the Cameroon presidency; the story goes that Ndenga was forcibly enlisted as bandleader – although by this time he was looking to Fela Kuti for inspiration. The rich array of percussion accounts for the first of those influences; the fat sax riffs the second. ‘Ngamba’, originally the B-side of ‘Yondja’, incorporates a head-turning synth break at 0:27, guitar melodies almost resembling Chinese folk, call-and-response vocals and sax playing as wildly jazzy as anything on this compilation.

Another rocker working for the man was Mballa Bony, who joined the army’s orchestra in 1975 and released the ‘Mezik Me Mema’ 45 the following year. Later he would cross over to Pop Makossa-ish electronic sounds, but for now his wistful, kindly-sounding vocal is backed by almost highlife guitar and a sax break for the ages. The booklet features Bony’s thoughts on the influence of James Brown in the Cameroon capital at the time; there’s no obvious attempt at a bite here, unlike Johnny Black’s ‘Mayi Bo Ya?’. Total Godfather of Soul worship for its first two minutes, it then fires off in myriad Afropsych directions, a demonstration of this music’s innate individuality even when the players are unabashedly trying to crib a style. Louis Wasson Et L’Orchestre Kandem Irenée’s ‘Song Of Love’, too, kicks off with deeply Brownian motion, Wasson himself drilling a killer riff into the frame, but a more chaotic arrangement thereafter than the old tyrant would have stood for. “I love you!” gasps the vocalist, stirringly.

‘Les Souffrances’, a song written by Johnny Black about the tougher side of life in 70s Cameroon and recorded by his friend Tsanga Dieudonne, is close as we come here to straight Afrobeat, if there is such a thing, though marking itself out by virtue of scorching proggy organ by Dieudonne himself (who also passed away in 2019). So high-tempo danceable it would have Prince Andrew sweating like Tony Blair, it apparently captured the national public imagination, as did ‘Monde Moderne’ by Pierre Didy Tchakounte Et Les Tulipes Noires. A paean to being a boy in a rock&roll band, late bedtimes and all, its French lyrics lend it the rock-gone-wrong marvellousness of that nation’s more offbeat vintage pop icons, like Jacques Dutronc.

A second Tchakounte cut, ‘Ma Fou Fou’, is bone-hard funk with a jazzworthy drum freakout: the only thing stopping this being a smash in waiting among those “ORIGINAL 45S ONLY” mod nights is the ruff fidelity. Meanwhile, if your idea of what funk sounds like was mostly gleaned from watching vintage pornography, the agile wah pedal wigging of Willie Song Et Les Showmen’s ‘Moni Ngan’ is for you. Why did Cameroon, indeed much of Africa, adopt and reshape funk so enthusiastically?

Redjeb, in an interview last year, suggested, “James Brown had a really strong message which really impacted Africa”; moreover, “when you talk to the musicians they tell me funk is very easy to them – Afrobeat is a bit more complicated because it’s a whole orchestra, you need brass, and not every band has that.”

I don’t think there’s anything more quintessentially Cameroon Garage Funk – that fulfils each word of its title most completely – than ‘Sie Tcheu’, by Joseph Kamga. A minute-long instrumental intro builds anticipation, and though there’s not actually a lot of vocal thereafter, the lead guitarist (presumably Kamga himself) dazzles with some hard blues riffs worthy of the most basement-dwelling teen pimplies, which again I naturally mean in a good way. The organ solo, when it hits, is pure wavy gravy Nuggets psych idealism.

The 1970s Cameroon bandscape had its own specifics, quirks and idiosyncrasies, just like that of any country from any era, and Analog Africa have ably captured this without going overboard. There’s no obvious reason, short of national affiliation, for someone to focus on its music – which of course crosspollinated with that of its neighbours, plus France later on with the 1980s makossa boom, this perhaps being a colonialist hangover – to the exclusion of others. It’s just full of slinky rhythm, stone funk and some really cool origin stories, the sort of stuff that justifies the continuing existence of the archive reissue market.

Cameroon Garage Funk is out now on Analog Africa

The Emotional Range of Nu-Metal in Five Songs – Picky Bastards

Chart of the Day: A Return to Nostalgia, LP Vinyl Records Purchases Rise

6 releases we’ve enjoyed this month – Beats To The Bar