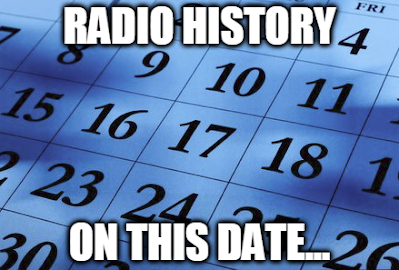 In 1941, while attending the University of Miami in Florida, he substituted as the announcer on his English teacher’s campus radio program and decided he wanted to be in radio. Collins began his professional career as the disc jockey at a bluegrass station in Logan, West Virginia; by 1943, he was at WKPA in Pittsburgh, moving in 1945 to WIND in Chicago and in 1946 to Salt Lake City’s KNAK. In 1950, he relocated to New York, where he joined the staff of WNEW and became one of the “communicators” on NBC’s Monitor when it began in 1955.

He is best known for creating the Purple Grotto program on WNEW-AM New York, and on this coast for his talk shows at KGO San Francisco.  He died of pancreatic cancer September 30, 1997 at age 78.

➦In 1923…using a 100-foot antenna connected by a clothesline to the building’s roof, WNAC Boston (then on 1260 AM, and eventually evolving to present day WRKO 680 AM)  arranged the first network broadcast in radio history with station WEAF in NYC (now WFAN 660 AM) conducted the first non-wired radio simulcast.  Today, 1260 is home for WBIX Boston.

It featured a variety of performers, including an old-time fiddler named Captain M.J. Bonner who played square dance music. WBAP’s barn dance was so popular that a number of other radio stations began copying it. Soon, the barn dance variety show format could be heard across the country.

One of the most successful imitators of WBAP’s barn dance was the Nashville radio station WSM, which launched its Grand Ole Opry in 1925.  Grand Ole Opry went on to become the best-known country music radio show in history.

The show starred Will Rogers, Paul Whiteman and his orchestra, Fred Stone and Al Jolson in a 47-station coast-to-coast program with Jolson in New Orleans, Stone in Chicago and Whiteman in New York. From his home in Beverly Hills, Will Rogers did a Coolidge imitation, the first time a President was imitated on radio.

Sponsored by Dodge’s new Victory Six automobile, the program reached an audience estimated at 35 million, the largest since Charles Lindbergh’s return in 1927. The following day, The New York Times headlined: “All America Used As a Radio Studio”.

Two months later came a follow-up. The second Dodge Victory Hour was broadcast in March 1928, once again with Hollywood stars and Whiteman’s band. To reach an even larger audience, United Artists installed extra speakers in theaters.

➦In 1932…”The Carnation Contented Hour,” a showcase for top singers and musicians, debuted on the NBC Red network. Sponsored by the Carnation Milk Company, the series continued until December 30, 1951.

➦In 1935...Bob Hope made his first appearance on network radio as part of the cast of “The Intimate Revue.” The variety show, sponsored by Bromo Seltzer, lasted only fourteen weeks, but Hope’s association with NBC continued for more than half-a-century.

➦In 1950… RCA Victor announced that it would manufacture long-playing (LP) records, a format pioneered by Columbia records while RCA was pushing the 45 RPM discs.

➦In 1954..Elvis Presley strolled into the Memphis Recording Service and put $4 on the counter. He recorded “Casual Love Affair” and “I’ll Never Stand in Your Way”, two songs that so impressed studio owner Sam Phillips that he had Elvis record his first professional sides for Sun Records the following August.

➦In 1977…innovative Chicago White Sox owner Bill Veeck hired a woman, Mary Shane,  to be the first woman to do baseball play-by-play on TV.   By mid-season, however, it was apparent Ms. Shane’s lack of experience and baseball knowledge had turned it into a bad idea and she was pulled from the broadcasts.

Shane later worked in Massachusetts, where she became a sportswriter for the Worcester Telegram in 1981. She died of a 1987 heart attack at age 42.

ABC Rock’s anchor affiliate was WPLJ in New York City and had many Album-oriented rock formatted station move from American FM Network with a total of 40 affiliates. The Direction Network was under ABC Entertainment Network’s executive’s charge and was for adult (25-45) formats stations and started with 57 affiliates.

➦In 2010…California sportscaster Rory Markas died following a heart attack at age 54, just weeks after he’d been named TV voice of the Los Angeles Angels. He had been the team’s primary radio play-by-play guy since 2002.

➦In 2015… Stuart Scott, for more than two decades one of the top sportscasters at ESPN,  lost his battle with cancer at age 49. Scott was famous for including culture references, slang and exuberant phrases along with his reports. His signature expression was “Booyah!”