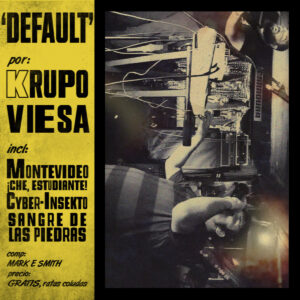 There are two kinds of music fan in the world: those who get The Fall, and those who don’t. Love them or hate them, you can’t deny that their sharp edged sounds, lyrical barbs and willingness to challenge didn’t change the punk/post-punk scene. The influence they had on other alternative bands – particularly in the 90s, with the slacker movement spearheaded by Pavement – is often glaringly obvious but, occasionally, there comes a band willing to take The Fall’s influence and use it to create something a bit different. This short tribute from Argentinian band Krupoviesa is a curious affair. They’ve taken four 90s era Fall compositions and reworked them in their own punchy image, repackaged them in a homage to The Fall’s ‘Slates’ – a seminal 80s work – and shared the spoils for free.

At times when the tunes aren’t drastically different, hearing them played with a weightier production sound and a vocal that’s a world away from Smith’s iconic drawl-ah can allow the listener to experience the songs afresh. In the case of ‘Edinburgh Man’ (‘Montevideo’), the louder drums bring a defiant edge, and hearing Smith’s once lax vocal transposed to a forceful Spanish bark makes the performance distinctive enough alone, before the band crash into the heavier chorus where whirring guitar sounds and hard bass grooves show off Krupoviesa’s huge musical chops. The arrangement mixes 90s indie sounds and light shoegaze in a way that shows how far reaching The Fall’s influence could be, and the rhythm section adds a relentless feel that’s both nostalgic and edgy. ‘Hey! Student’ shows off the band’s punkier edges via a great riff undercut by a new wave synth noise. On a performance that values speed over everything, the Spanish vocal and slightly tougher stance are the only differences from the ‘Middle Class Revolt’ track from ’94, but it’s an enjoyable romp through one of The Fall’s crashier numbers, before ‘Cyber-Insekto’ works various angrier elements into a frenzy. On this recording, Krupoviesa manage to capture the sound of a “typical” Fall rhythm section very well with motoring drums and thundering bass leading the charge throughout, but it’s a sharp and atonal lead guitar coupled with an echoing vocal that makes the piece. With these elements, far more of Krupoviesa’s own character shines through, especially since the Spanish lyric and distorted effects transform the rocky workout into something more sinister. It retains just enough of Mark E.’s beloved rockabilly vision to make it familiar too, promising something that might just provide a welcome alternative for the bigger Fall fanatic.

That’s all good, but it’s a second dip into ‘Shift Work’ era material that offers this EP’s most interesting cut. The Fall’s original ‘Blood Outta Stone’ was an enjoyable enough indie rock jangler that wasn’t a world away from sounding like MES fronting Inspiral Carpets, but these guys really make it their own. At first, they tap into a theatrical vein by adapting the piece to make sound like a European soundtrack number, dominated by an ominous spoken vocal, accordion sounds and slow beat. It’s much closer to something you’d find lurking on Iggy Pop’s ‘Free’ album of 2019. At least it would be, if not for a huge twist. For the chorus, Krupoviesa take crushing riff that recycles sounds from alternative and goth metal bands and hammer it against a louder vocal for full dramatic effect, leaving nothing almost that can be recognised from the original source material. It’s very brave; more importantly, it works brilliantly in its own right.

In terms of tribute, this is great. Loving, but unafraid to take a couple of detours, tight yet raucous, it takes The Fall’s relentless energy forward in a way that most great DIY bands would relish. If you have any interest in left of centre cover versions, The Fall or noisier indie rock, this is more than worth making time for. There’s every chance that the always contrary Mark E. Smith would hate it, just as the pioneering spirit of John Peel would love it. Such a pity that neither are here to actually experience it…

January 19, 2022
Rachel Nagy, The Frontwoman Of The Detroit Cobras, Has Died, According To The Band

Rachel Nagy, The Frontwoman Of The Detroit Cobras, Has Died, According To The Band

January 19, 2022
The metaverse is everywhere: Here’s what you need to know