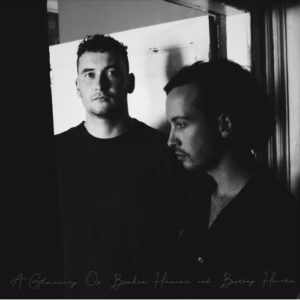 An EP called ‘A Glossary of Broken Humans & Beating Hearts’ automatically sets itself on a pedestal of fragility. Thankfully, although this second release from Yard Arms is emotionally honest, it’s music has an uplifting quality in its melancholy. Although sometimes treading a different musical path, the four songs are able to stir the emotions in a way that Kitchens of Distinction, The Blue Nile and Death Cab For Cutie had previously. This is a good thing.

The lead track ‘Idea of Me & You’ opens with a fantastic retro jangle, placing the listener squarely in the early 90s. It’s opening bars are never a miles away from The Cure at their most commercial (there are definite influences from the ‘Wish’ era), but then, a slightly darker vocal encroaches, taking the song somewhere a little moodier than first suggested. Allowing for a little time to tune in, the marriage of voice and music is actually lovely; almost like a throwback to Martin Rossiter and Gene. Adding a little of their own flavour, muted guitars and a big jangle drive a brilliant verse forward, before a pre-chorus injects a few deep drums before the Cure-ish mood kicks back in. Chorus-wise, it doesn’t entirely live up to the early promise, but the structure and style of the verse is strong enough to carry everything else. A stronger track all round, ‘Keep On Laughing’ presents a huge indie rock jangle, before dropping into a very rhythmic verse that shows off a few tinges of early Arcade Fire. Moving into chorus, another ebullient croon takes over and sweeps the listener further back into the 90s. While none of it seems especially complex, the combination of familiarity and great production values makes this a superb listen – especially for those looking for an alternative to their usual melancholic sounds. By the halfway point, chances are, if you get Yard Arms, you’ll be really taken and by the time the chorus hits for the last time, it feels like a tune you’ve known forever…but it’ll also be one you’ll want to return to time and again. …And when you think Yard Arms have nothing more to give, a swooning guitar melody cuts through to create a very atmospheric climax. At this point, the early potential in Yard Arms should be obvious enough for all fans of 90s influenced sounds.

‘Comfortable’ takes a side-step into something mellower at first, almost sounding a little like Lloyd Cole in the way the natural vocal tones meet a ringing guitar. It isn’t long, though, before Yard Arms increase their volume in a more typical fashion, placing a repetitive rhythm against a huge howling croon and then showcasing a warm bass against the very 90s jangle. There’s a lot of repetition within the key melodies, but with repeated listens, these darker jangles definitely Eventually exploding into one of the hugest refrains ever, a massive vocal goes head to head with the riff four an outpouring of internal angst. Finally, ‘Heavy Silences’, offers a fine, lilting melody almost constantly underscored by great hi-hat work. At this point, the core of the band’s sound could start to feel a little repetitive in the way they slowly push the jangling indie sounds into a big, crashing chorus, but thankfully, a gift for making potential bombast sound so inviting – and in this instance, the presence of some mournful brass – really sets things apart from everything that’s gone before. There’s even a little more bravery when reaching for the extremes, with hints of shoegaze and a much more devastating riff used very effectively. For most bands, that would be enough for a killer track, but by dropping into a semi-mechanical riff underscored by a haunting, wordless vocal, an already full to bursting arrangement is able to squeeze out a little more atmosphere. Upon reaching something near breaking point, the vocal repeats “we’re giving it one last try”, dropping the listener into the middle of this relationship hurricane…and again, it’s hard not to recall Gene in the way this aims to pull at the heartstrings.

This is brilliant. If you ever loved Gene, there’s more than a chance of Yard Arms winning over your affections…and pretty quickly too. Likewise, if you’ve ever felt a strong connection with Kitchens of Distinction, you really need to check this out at your earliest convenience. For lovers of 90s influenced music, it’s an EP not to be missed.

January 17, 2022
The ten most popular dog breeds in the UK, from large to small – a complete list. » Brinkwire

January 17, 2022
The Detroit Cobras singer’s death announced by her heartbroken bandmates who pay tribute to frontwoman

[Opinion] The 2022 crypto market, according to Luno

[Opinion] The 2022 crypto market, according to Luno

Advice to Boomers and Millennials from Gen-X, part 1 – Jon Bastian

Can you live in London for 24hrs using only bitcoin?