QHW Audio’s THE VINYL phonostage is made in Spain, accepts both moving coil and moving magnet cartridges, and costs a very reasonable €760 plus shipping and relevant taxes. Stuart Smith finds out how it fares for HiFi Pig. 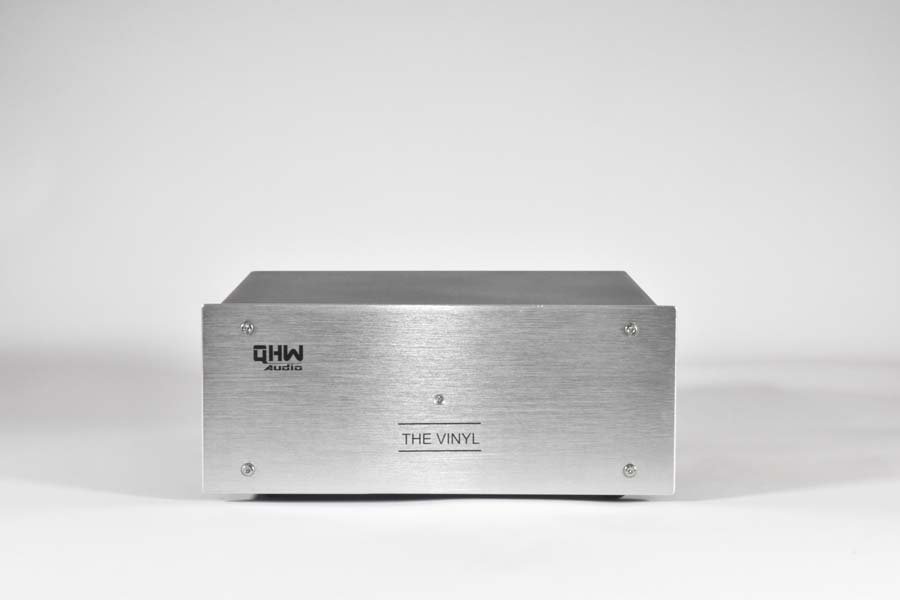 The QHQ Audio THE VINYL is a well put together if unassuming unit.

QHW are a Spanish company based in Madrid owned by Francisco Vizcaya who is a music lover, audiophile and classical pianist since the age of six. Around 2007 Francisco began QHW Audio as a personal project with the aim of producing a high-quality small signal audio amplifier with discrete components and making the best use of his electronics and computer engineering studies. The AE2270 op’ amp has been further refined and developed to avoid parasitic effects and to have the best signal routing using components with very tight tolerances as close to the exact calculated values as possible. A key part of Francisco’s design philosophy when designing the circuit board for THE VINYL has been to look for the very best coupling and thermal stability.

The company have three products; THE VINYL phonostage and then two units called THE BOX and THE BOX II which I’d initially assumed were Step Up Transformers but are in fact both boxes aimed to go between any source (CD/DAC/Streamer etc.) and your pre/integrated or between your pre and power amplifier. THE BOX II is not like anything I’ve personally come across before and so I’m looking forward to seeing what that brings to the party in another review. However, the focus of this review is THE VINYL phonostage, a configurable Moving Magnet and Moving Coil unit with separate inputs for both.

You can try THE VINYL for 21 days and return it if you don’t like it with just the courier charges to cover. 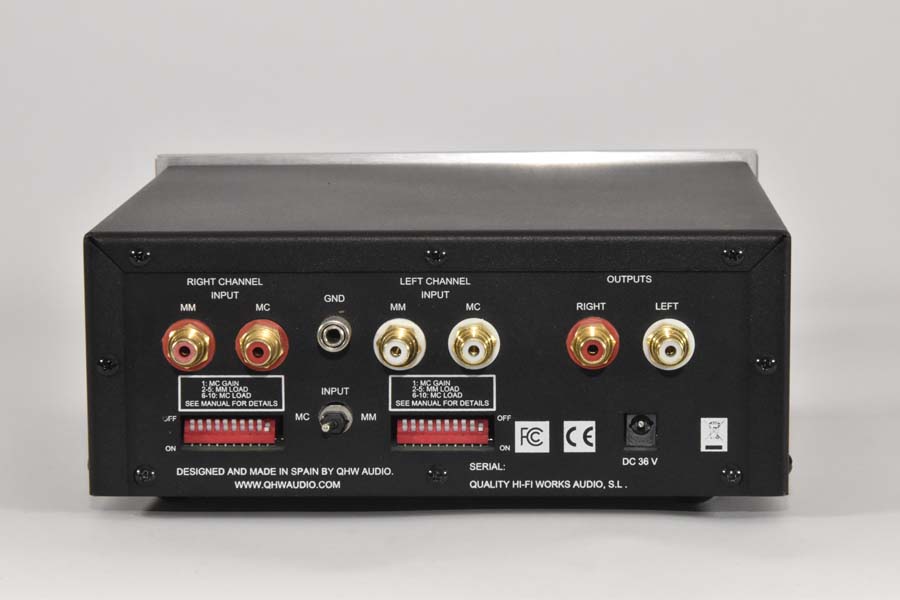 A well laid out back panel with switchable inputs for both MM and MC cartridges.

THE VINYL is an unassuming silver fronted 2Kg box measuring 218 x 243mm (WxL) and so it’s nice and easy to position on a rack without taking up too much space. When I say it’s a box that, from the front at least, is all it is – the front panel has nothing on it other than the company logo top left, four bolts in either corner, a screen printed THE VINYL, and a blue LED. That’s your lot. For some reason, and I have no idea why this is other than maybe the font used for the “THE VINYL” lettering, it reminds me of earlier Musical Fidelity kit.

Round the back you have MM and MC inputs and the grounding post, a toggle switch to switch between the two, and the RCA outputs to connect to your pre/integrated amplifier. There’s an input for the external power supply and then two banks of ten DIP switches to set the phonostage up for your cartridge of choice. I have to say that as someone who does switch between cartridges that I really don’t like DIP switches but the saving grace of THE VINYL is that you can set up for one MM cartridge and one MC cartridge and then switch between them. This means that you can have a turntable with two arms (one MM and one MC), two turntables (one MM and one MC) or switch between MM and MC with you needing only to flick the toggle switch round the back, though I’d have much preferred this to be on the front of the box. You could also use two MC cartridges with one into the MC input and one into the MM input with a SUT before it.

Inside THE VINLY there is the QHW AE2270 amplifier and then a discrete input for the MC input. MHQ say that components have been carefully selected and that the amp offers up high gain with minimal distortion. Full specs are at the bottom of this review but for those interested the gain (at 1KHz) is 43dB for Moving Magnet, 63dB for low MC, and 69dB for high MC whilst distortion is claimed to be 0.004% for MM and 0.007 or less for low MC.

With the dip switches, a handy card with values is supplied in the pack, you can alter input capacitance from 47pF to 617pF for MM, and input impedance for MC between 47 Ohm and 32KOhm. Input impedance for MM cartridges is 47Ohms and input capacitance for Moving Coil cartridges is 150 pF. The deviation from the prescribed RIAA curve is +/-0.1dB and channel crosstalk is claimed to be unmeasurable.

Overall this is a good looking, well put together (if unassuming) box of tricks that for most people will be fit and forget.

Did I mention that I really dislike DIP switches? Well, I do. However, I must emphasise that they are pretty much the universal way of setting parameters on phonostages at this kind of level and I assume that adding more user-friendly setting controls, as per on our LAB12 melto2, will add to the price. On that point, the price is €760 plus shipping with import taxes etc being your responsibility.

For this review, I used the Sumiko Olympia (MM) and the Goldnote Tuscany Red (MC), both running on the Technics 1200G. I referred to the handbook for both and set DIP switches accordingly.

Set up is, DIP switches notwithstanding, much the same as with any phonostage – connect the turntable leads and connect the phono to the pre/amp. Within a matter of only an hour or so the PSU, got very hot and gave up the ghost but I switched to using the one from THE BOX. This is the first time I’ve had a PSU give up on me with any bit of kit and I can only assume it was a faulty unit. It’s worth noting here that the second PSU got fairly warm too. PSU’s do fail from time to time and I think this is more a case of bad luck than anything else. 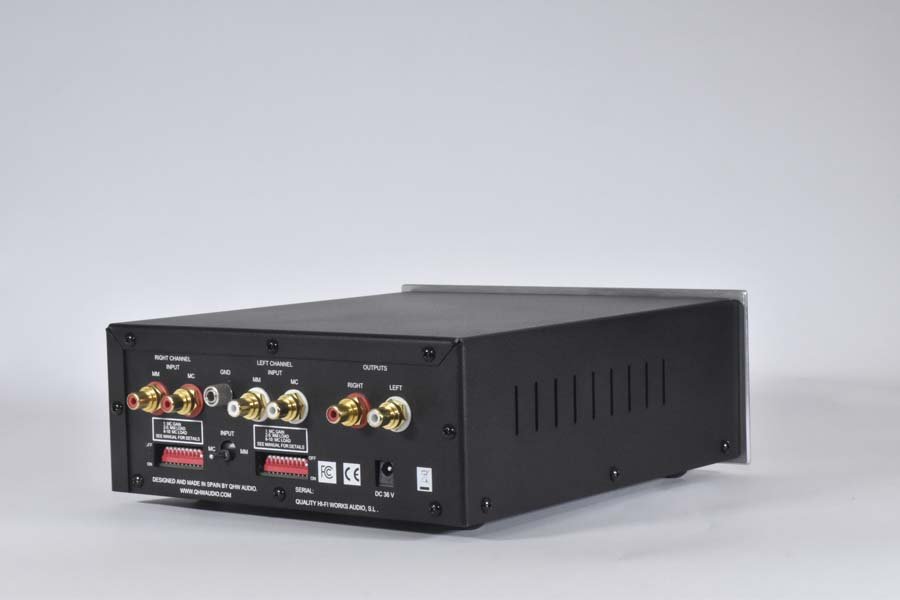 The QHW Audio THE VINYL is small and easy to accommodate on your rack.

From the first few bars of John Martyn’s Solid Air (Half-Speed Master on Abbey Road) it was clear that this phonostage was a classy performer. It has silent backgrounds which is an excellent starting point for any phonostage as that lower noise-floor allows the rest of the information present to be processed properly by the listener. The Sumiko cartridge errs, in my opinion, on the warmer side of neutral and the QHW doesn’t mask this in any way – the character of the cartridge is allowed to come to the fore rather than the stage adding its own flavour. Allowing the cartridge to shine as the component is important as it will allow users to season their system to their own individual tastes with their chosen transducer.

Despite the modest price of this cartridge the detail the QHW allows through is very impressive – I’d genuinely had it priced as higher than its sub €800 asking price before I checked on the company’s website. Imaging is solid and stable with my only comment being that (with the same cartridge) our LAB12 melto2 is more three-dimensional, though there’s not a great deal in it, if truth be known. This excellent imaging really does immerse you in the recording and the pinpoint stable placement of instruments and vocals in the mix is striking for this kind of money.

Basslines are easy to follow and speedy. Details such as small touches on the fretboard whilst listening the aforementioned Solid Air are effortless to pick out and hear and this makes for an organic and natural listening experience.

Listening to the Baby Driver soundtrack (there’s a LOT of tracks crammed onto this record’s real estate) and perhaps the Olympia isn’t the best cartridge for digging the deepest when compared to the GoldNote, but THE VINYL does a good job in presenting what the cartridge is able to pull from the grooves.

All in all I have very, very little to whine about with this phonostage and the Sumiko Olympia combo and there’s a good deal to rave about, especially at the asking price. 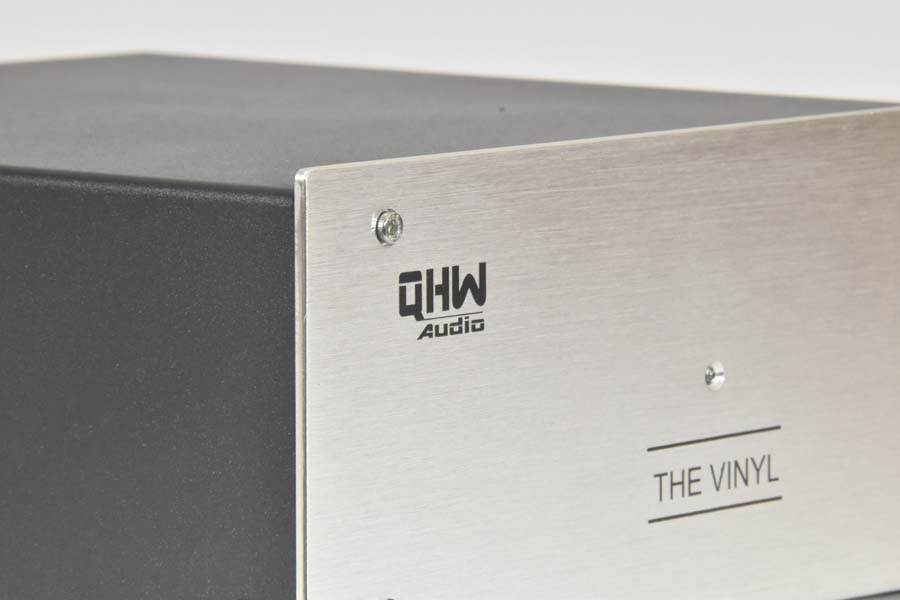 If using two turntable or two arms, switching to the Moving Coil input will normally involve flicking the toggle switch on the back of the QHW to the MC position and again I wish they’d added a bit to the price and popped this on the front panel. For me, as I’m using different cartridges on the same turntable I needed to swap over the cables to the MC inputs – obviously.

With his cartridge in place, I found it advantageous to flick the gain DIP switch from 63 dB to 69bB which just seemed to give a bit more weight to the presentation – YMMV. The phonostage itself still remains silent.

This is a €5000 cartridge that should really not be in the same company as this phonostage but it fits in very nicely indeed and again allows the character of the cartridge to come to the fore. It’s still difficult to believe I’m listening to a phonstage that is so modestly priced.

The same detail as when listening to the MM input is apparent and the lack of the phonostage’s own additional character is to be highly praised.

Sonically this is an excellent cartridge as I’ve outlined, but it is not perfect and I wouldn’t be doing my job if I didn’t highlight these quibbles. First of all, having a PSU fail and its replacement getting hot was not a great start and it did jade my initial opinion on THE VINYL. Secondly, the toggle MM/MC toggle needs to be on the front of the box. I also don’t like the DIP switches but to single THE VINYL out for this would be unfair as it’s common on pretty much all phonostages at this price and I do change cartridges more than many and so I am hyper-sensitive to their inconvenience.

This is a highly detailed and quiet phonostage that really does allow the character of your chosen cartridges to shine. At the price it can only be described as being excellent, with the caveat of the quibbles I outline above.

DIP switches to set loading etc on the back (not unusual)

Toggle to switch between MM and MC on the back

Had one PSU fail on me

Very good soundstaging that is very solid and stable

We Didn’t Love So Much:

MM/MC toggle is on the back panel

Elevator Pitch Review: THE VINYL from Spanish brand QHW Audio is aesthetically a no-frills design, but what it lacks in physical beauty it more than makes up for in its sonic presentation at this price. THE VINYL allows your moving magnet or moving coil cartridge of choice to exert its own character on the presentation whilst adding very little of its own character. DIP switches are used to set loading etc and there are separate inputs for MM and MC cartridges, allowing you to switch between the two with the flick of a switch on the back panel. 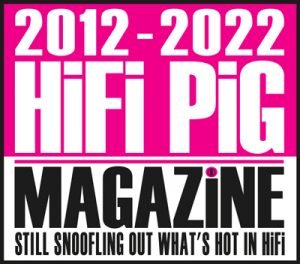