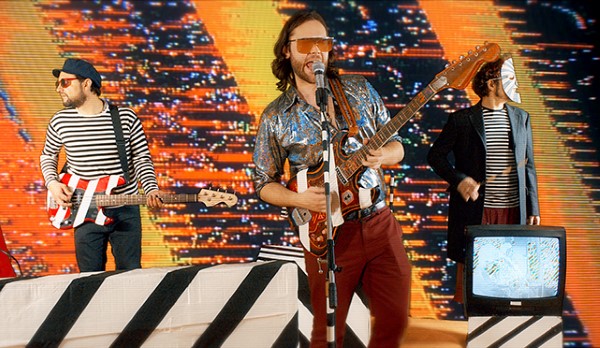 Toronto-based electro post-punkers AUS!Funkt have unveiled their new single, “Information YEAH!”, along with a video to accompany the release.

Landing alongside the release of their freshly minted EP, Post-Stagnation, “Information YEAH!” begins with distortion and a tinny beat. From there, the bassline comes in, followed by rhythmic guitar, and then pulsing percussion that evokes a heartbeat; it builds and builds, and then come the vocals — spare and spoken and monotone, evoking a feeling of detached isolation and the quiet, repressed desperation of the modern age.

The song conjures the computer-nerd New Wave idiosyncrasies of DEVO or Talking Heads, and brings in some dark, dance-y New Order elements. Then, as soon as the listener has become accustomed to that particular vibe, the song morphs into a driving ’90s techno hypnosis with energetic female vocals. It’s both a journey and a mishmash of all the elements that have led us here, and even though it’s overlapping and trippy, it’s ultimately a ton of fun.

Both the single and the EP were written and recorded prior to the pandemic, spanning from 2017 to 2019. But the band felt that now was the perfect time to release it, especially considering how relevant the message is to the current state of affairs.

“’Information YEAH!’ hits all the keywords that marked this last year and a half: information, regurgitation, constant negation, no inspiration, indoctrination, suffocation and many other ‘-ations’ that we struggled with as a band,” AUS!Funkt says. “But, at the same time, the whole world did as well. It’s not that these things did not exist before the epidemic hit, it’s just that they became much more palpable in the time of crisis.”

Check out the video for “Information YEAH!” below, and find out more about AUS!Funkt via our mini-interview.

Care to introduce yourself to our readers?

We’re AUS!Funkt, an art-disco/post-punk quartet from Toronto. Half of the band is actually from different countries, Portugal and Serbia, but Toronto is where we all met and where AUS!Funkt was born.

We started off conceptually as a post-punk project but in the process, we embraced the elements of electronica, dub, disco, garage rock, and blues while maintaining grittiness, simplicity, and repetitiveness. If one sentence should describe us best it would be: AUS!Funkt assaults the senses and uneases the mind while you dance to its unsettling dark disco beats

Tell us about the making of “Information YEAH”. What started the writing recording of the song?

This track went through several transformations, some of which were drastically different from what you’re able to hear in this track. The first iteration was no-wave influenced, bass driven, with short, serrated guitar stabs, and minimal dead-pan vocals. But then slowly it started moving in the direction of where it is now – a dark techno-driven garage-rock journey. It’s a tongue-in-cheek commentary of overconsumption and oversaturation with information (but could be applied to almost anything really) and the machinery that’s feeding it. It’s pretty much summed up in the lyrics in a line “Signal to noise’ – signifying the moment when all receptors become oversaturated and all information turns into white noise, ceasing to mean anything anymore, its relevance lost. And we’re not indifferent to that, as individuals, and as a society. Or at least we shouldn’t be.

The track was composed pre-COVID but the lyrics resonate even more during these pandemic times as the tirade of information (Regurgitation YEAH!) assaults and their negative impact on people’s lives intensified immensely during lockdowns. Misinformation, misconception, misdirection YEAH!.

You are now the DJ of your own club – what’s the sure-fire song you spin to get everyone on the dance floor?

The recent one I heard and is a definitive (but still relatively obscure) club banger is a track called “Say What” by the band Wrangler (https://youtu.be/E4mo49aMJn8). I really enjoyed it when people from some of my big 80’s influences (Cabaret Voltaire, Cocteau Twins) got together and formed Wrangler and started using vintage analog synthesizers and digital sequencers to create modern electronica albums. Modern grooves with special character.

Tell us about music for you being a way to express yourself politically or putting the spotlight on things around you most bands wouldn’t talk about.

Although we’re not intentionally trying to make any political statement, it seems like our subconscious minds agree to disagree. The topics that we explore in our lyrics are also the topics we discuss among ourselves and with others. Sometimes the whole parts of the discussions we have among ourselves become part of the lyrics. But it can be a graffiti sign. Or an (un)intentional provoking comment on the street. A situation, a piece of art, news headline – anything that resonates with us can and does get incorporated in the tracks.

It’s just a way of staying tuned to what surrounds us and what is in us – observing, commenting, reflecting, and reacting. Coming from the punk and especially post-punk scene, we carry on that idea that music should be fun, rules should be broken, structure should be revised but some sort of meaning should be attached to all of that. And sometimes that meaning also means the exploration of lack of meaning. We’re trying to make music fun and digestible, but not stripped away of any content. We want people to absorb it and not consume it. We want people to dance but we also want to give some food for thought.

Canadian Beats is all about Canadian music, so who are your current favourite Canadian bands/ artists?

There are several bands that are pretty exciting, some are bigger, and some are smaller names but all equally very good and deserve a mention. Holy Fuck, Crack Cloud, Hot Garbage, New Fries, just to name a few.

I’m Jenna, and I am the founder and editor of Canadian Beats. I have had a strong love for Canadian music, which started many years ago. I have a passion for promoting these talented Canadian bands and artists, and that’s how Canadian Beats came to be. I am so proud of what it has become over the last few years, with many talented music lovers and writers coming together to spread the word of Canada’s music.