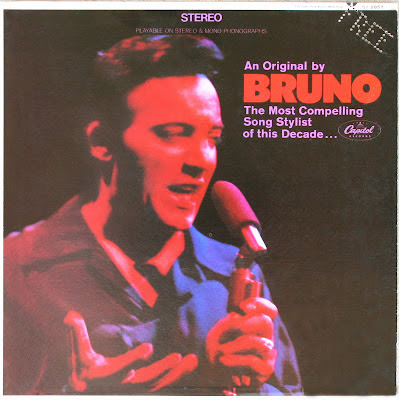 Does the word ‘nuance’ still apply if the distinctions in question are not subtle?

As in: ‘It’s the overt and blatant nuances of singer Tony Bruno’s histrionic vocal phrasing that make his recordings stand out so brilliantly.’ – – ?

I found this album many years ago in a thrift shop.
I hadn’t a clue, took a chance, it’s been a favorite ever since.

At first whiff, Bruno performs in an Engelbertian Vegas style, – – only more so.
His vocals slide from languid to pensive to bombastic to overwrought, often within moments.

His renditions of familiar cover tunes bear his stamp, and his originals are unique. By definition, he is too cool, to the point that it goes beyond schtick into a strangely earnest realm of offbeat hip. 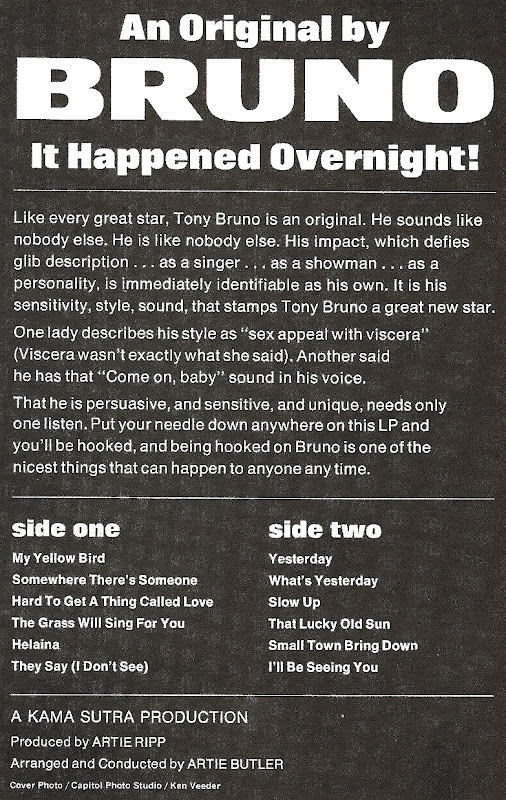 In 1960, Tony Bruno was working in the Brill Building in New York, pretending to be a record producer.
In fact, his label, Nomar Records, was a front for a New Jersey bookie with whom he was acquainted.

Nevertheless, when singer Maxine Brown walked into his office with a demo recording, Bruno found himself producing her first record, ‘All in My Mind’, which sold 800,000 copies and kick-started his career as a successful record producer and songwriter.

The Nomar label was bought by the Scepter/Wand record label, where Bruno would work over the next several years with Gene Pitney, Chuck Jackson, and many others. 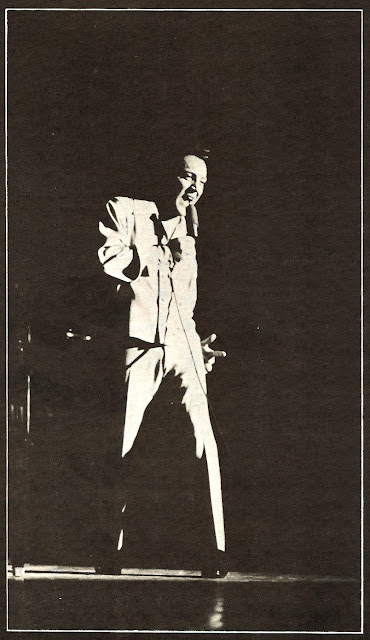 His singing career also began as something of an accident.

In 1967, he had recording studio time booked for an artist who failed to show up. When Bruno stepped in and recorded his own vocals, Artie Ripp, an executive with the Buddah record label liked what he heard and started the wheels turning for Tony’s first album.

That first album was one of the first LP releases for the Buddah label, issued as ‘The Beauty of Bruno’.
When the record failed to sell, Artie Ripp sold the master to Capitol Records.
The album was re-issued in 1968 as ‘An Original by Bruno’, with different cover art and minus the sound of a long toke on a joint that introduces the Buddah version (and sets an incongruous mood).

There was a second Tony Bruno LP released by Capitol the following year. I hope to post selections from it here in the near future.
(Here ’tis, ‘cuz no one demanded it!)

Heading into the 1970’s, Bruno turned his efforts to scoring film soundtracks.
He supplied music and made an appearance in ‘Hell’s Angels ’69’, but most of his other scores were composed for adult films.

– In 1972, using the name ‘P. Vert’, Bruno released an odd, ‘under-the-counter’ X-Rated novelty record called ‘Stickball’. Follow the link to Probe is Turning-on the People, and scroll down to ‘session 34’.

– I’ve been enjoying my copies of Bruno’s LPs for years, but for much of the background info here, I turned to the one and only print piece I’ve ever seen on the subject.
In 1998, issue #7 of Scram Magazine included an article, ‘Beguiled By Bruno’, written by Gene Sculatti. Short of finding a copy of that issue, the truly curious also have the option of subscribing to the ‘Rock’s Back Pages’ online library, where one can find Sculatti’s complete article archived.

**P.S.: Pssst! If you happen to have a color photo of the original Buddah ‘Beauty of Bruno’ LP cover you can share, I’d love to post it! 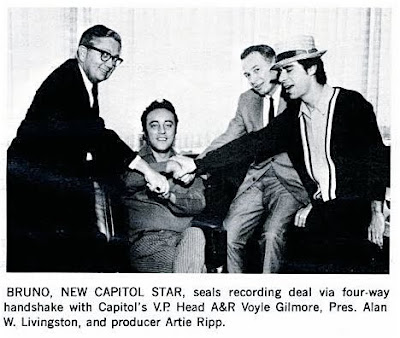 UPDATE, 2/25/10:
Still not finding any good cover images of the ‘Beauty of Bruno’ album on the Buddah label, but did just come across an old
full-page ad printed opposite a page of Bruno puff pieces that appeared in the back of the January 6th, 1968 issue of Billboard Magazine.

At right, ▶
Bruno and Artie Ripp inking a deal with Capitol Records.

Click on images below to read text of Billboard articles enlarged in a new window. ▼ 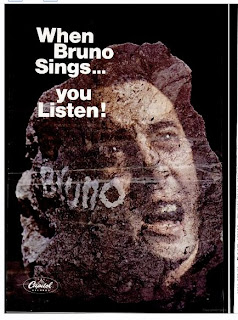 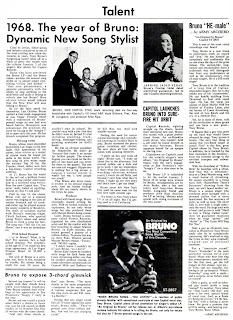