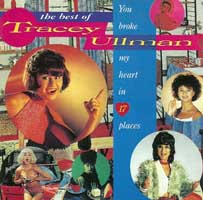 A covers album all done in the classic ’60s girl group sound, but I didn’t know they were covers when I first heard the album. In other words, Ullman’s versions introduced me to these fluff bubblegum pop songs. I owned Ullman’s first album, You Broke My Heart In 17 Places (issued in 1983), as an LP, but passed on the 1984 follow-up, You Caught Me Out, most likely because it wasn’t released in the US. Packaged as a best-of, this is essentially a reissue of the 11 tracks from the 1983 debut album with additional material to pad the release to CD length. Most of the additional material comes from You Caught Me Out. The cover art is that of the original album, with “The Best Of” added over Ullman’s name. In the US, Ullman is officially a one-hit wonder, with They Don’t Know peaking at #8 on the Billboard charts. No other single came close to reaching the Top 40 in the US, although she had a total of 6 Top 40 singles in the UK.

I guess Ullman could best be described as a Emmy-winning singer-actress-comedienne, but she’s best known for her sketch comedy on her various TV shows and specials. These days, I think she’s pretty much disowned these early recordings (even though I bet she gladly accepts the royalties). Still, I’m glad she recorded these covers.

Regular readers of this blog know that I normally praise Rhino Records because their reissues are always first rate with great liner notes. Well, the great liner notes are here, but I’m very disappointed in this reissue because, inexplicably, they completely reorder the track listing from the original release. Why, Rhino, why? Fortunately, I can (and do) restore the original sequencing. For those playing along at home, that means that the CD tracks should be played in the following order: 1, 8, 7, 4, 6, 11, 2, 9, 3, 10, 5.

Tracks: I’m fond of They Don’t Know because it was the reason I bought the LP in the first place. I also like Breakaway, (Life Is A Rock) But The Radio Rolled Me, Move Over Darling and the title track. However, there’s nothing I normally skip. I bought the CD for nostalgia’s sake, so I normally don’t listen to any of the bonus tracks (12-20) from Ullman’s second album, even though they offer more of the same pop covers (if ain’t broke…).

Personal Memory Associated with this CD: For me, the original LP got a lot of playing time in the Spring of 1984, my senior year in high school. In particular, I’m remembering a trip to Galveston in May of that year with about 10 other seniors who were active in school drama productions. Lots of singing and dancing on that trip, along with my first viewing of the Rocky Horror Picture Show at Gulfgate Mall. I think that mall was demolished about 10 years ago.