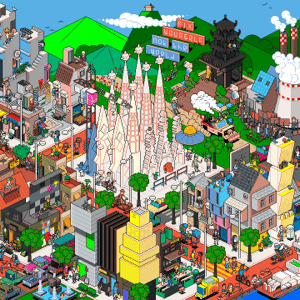 Out of the crop of late 2000s ‘landfill indie’ bands, The Wombats have certainly aged better than most. The bands cheesy, anthemic hooks have proven far less wince-inducing over the past decade than the awkward, laddish misogyny of the likes of The Fratellis and The Kooks. The band have also smartly evolved their sound over the years, with tracks like 2015’s Greek Tragedy sounding closer to the 2010s’ 80s revival indie pop of The 1975 than the watered down post-punk and garage rock of the scene they broke through in. This cumulated in 2018’s Beautiful People Will Ruin Your Life, which took the band back to their early influences and stripped back the sound to match. It’s a record that I enjoy to a fair amount, with strong catchy songs that shows the band’s clear adoration of the early noughties indie trailblazers like The Strokes and Arctic Monkeys. Fix Yourself, Not the World follows up on a lot of the post-punk revival and dance punk elements of that record, but maxes out the scale and bombast – to varying results.

All is revealed by the opening track, Flip Me Upside Down. The track is so shiny and polished, but feels so predictable and safe. The vaguely dance-punk groove is rigid and lifeless, the hook bland and by the numbers, and the maximalist production sanding off any scrappiness or energy that a track like this needs. The song is far from bad, but it’s the kind of watered down early 2010’s indie that the band have so far managed sidestep. This over-polished, super safe style is unfortunately carried through the entire album, from the Glastonbury-highlight-montage-core of This Car Drives All by Itself; to a softened up version of Death From Above 1979’s heavier style of dance rock on Ready For The High; to the cringy millennial whoops on Don’t Poke the Bear .

The lyrics on the album are also quite pessimistic, which is not a style which suits The Wombats well. While the outright cheese of the band has been slowly turned down over the years, the band maintained their sense of fun and levity. While nowhere near as downtrodden as say a Radiohead album (there’s actually a really fun lyric referencing the band here), the band tries to tackle some broader societal and introspective themes on the album that they don’t really have the writing chops to pull off. The songs are earnest, yet don’t have much depth, and also try to retain the bands inherent silliness. It’s a weird mix that never really finds balance.

The record still has its moments. Lead single If You Ever Leave, I’m Coming with You is a fun and universally emotional blast akin to a lot of their big hits in terms of melodrama and scale, and This Car Drives All by Itself is incredibly catchy despite how cliché it is. Method to the Madness builds slowly through a low-key, downtempo instrumental into a thunderous and chaotic climax which is surprisingly heavy for The Wombats.

All in all, the album is fine, but incredibly run of the mill. It sounds straight out of 2011 in all the wrong ways, the kind of watered down, overblown, festival-sized indie rock that garnered the ‘landfill’ term back then. I can see teenagers new to the band loving it, but it lacks originality even compared to the bands earlier work.

Top Tracks: If You Ever Leave, I’m Coming with You, Method to the Madness