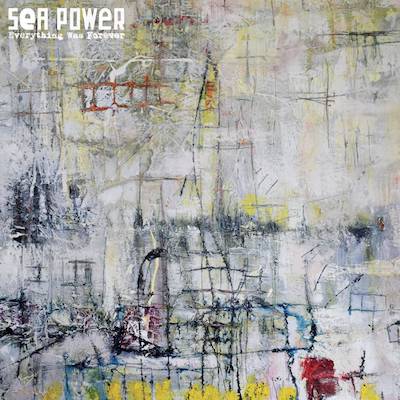 A great, cult survivor returns with arguably their best since the indie boom they were born from

The newly named Sea Power’s back catalogue is a triumph of sophisticated rock engineering. So much so that the release of Machineries of Joy in 2013 prompted the Independent On Sunday (RIP) to remark in its review that ‘it’s almost boring: yet another excellent (British) Sea Power album.’

Well, quite. And I’ll cut to it. Almost a decade on, Everything Was Forever, their twelfth record (counting soundtracks), doesn’t fall short of those lofty expectations that have endured through the straight-up, indie pop of Remember Me to the beautifully crafted sonic seascapes of The South Sound.

Perhaps a couple of factors are at play here. The new ten-track LP marks the band’s first work with producer, Graham Sutton, in more than a decade, and it sees a return to the songwriting lamenting what could have been with the same reflection and energy as their debut and the much revered Do you Like Rock Music?

As they said in a recent interview, a feeling of grief, remembrance, defiance and rebuilding (the Wilkinson brothers lost both their parents in recent years) sits across the album – both personal and reflecting on the difficult times we live in.

Those emotions are laid bare on the stripped-back, looping shoegaze opener, Scaring at the Sky – Yan drawly meandering in his signature delivery, ‘for the last time, I’ll give this a try’ – before the instrumentation reaches the end of the runway on the ambient Two Fingers, which gives us those all too recognisable post-rock guitars, the rousing chorus that sounds like they couldn’t be anywhere else than at sea, and the horn-led instrumental that rides it over the horizon.

Elsewhere, Doppelganger is a smelting pot of post-punk; Folly is the band at their expansive best; and Green Goddess blends Interpol with euphoric synths to remind you they’re capable of the radio friendly. Lakeland Echo slows the pace and softens the mood – you’d be forgiven for thinking the opening instrumental is a little Reflektor-esque Arcade Fire – and circles back to loss in a ode to their late parents.

It’s all beautiful melancholy – with expansive sounds that never feel dated and paint a landscape for you like others can’t – a great cult survivor of the indie boom with arguably their best since.

If you’d like to support us by subscribing to our zine, click here – it’s just £6 a year for four copies (inc p&p).

Want to keep up to date with all our latest pieces? Follow us on social media…