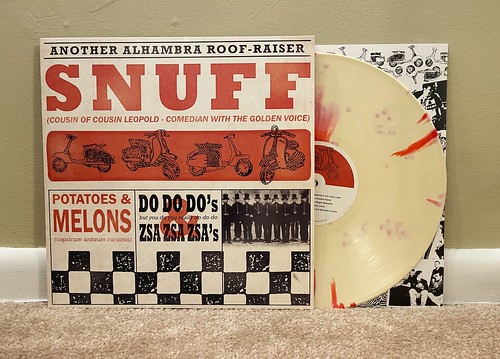 Let’s get this out of the way.  Yes, this is only one of way too many versions of this LP that are available.  And on top of that, I can’t get them all at one place and on top of that all places to get them from are in Europe.  It makes it somewhat expensive to try to be a completist, something that I’ve always tried to be for Snuff.  This looks like is the album where I may have to finally give up.  I picked up this version from the Snuff webstore and I have another version with different cover art preordered from the SBÄM store.  The other vinyl variants are just going to have to elude me for now.

On to the record itself, this is a compilation of Snuff songs, primarily from the old Potatoes And Melons At Wholesale Prices Direct To You The Public (or Straight From The Lockup if you have the Fat Wreck version) EP.  It also adds in songs from the Do Do Do  and Gandara 7″s among others.  There are a lot of cover songs in here along with Snuff originals of varying seriousness.  That’s always been what I like most about Snuff, their records and shows are always so much fun.  Do they have great songs with no comedy elements? Of course.  But what’s better than sandwiching those in between commercial jingles?

Everything on here is fun, but the Do Do Do 7″ songs stand out to me in particular as it was among the earlier Snuff releases that I picked up when I first got into the band.  The covers of “I Will Survive,” “Standing In The Shadows Of Love” and “Soul Limbo” are just so great.  There are actually two versions of “Soul Limbo” on here, I prefer the Do Do Do one.  There are also two versions of “Theme For Whatever Happened To The Likely Lads,” for these I prefer the one that was from the Deceptive Christmas 7″.

It’s great to have all of these songs on one LP.  Of course I have the original 7″s, CDs, 10″s and LPs that originally contained these songs, but it’s nice to have one record that I can pop on to hear them all.  If there’s only one complaint, it’s that I wish the Long Ball To No-One songs were also on here.  After all, “Dow Dow Boof Boof” is my very favorite Snuff song.

Snuff – “Soul Limbo” (Do Do Do Version):
https://www.youtube.com/watch?v=LziwhD8J1Ow&ab_