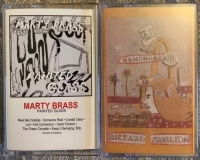 I was going to call this the debut solo release from Marty Brass until I remembered “On The Grass” from a couple years ago– but I don’t know, can you really count a digital-only release as a true debut? Perhaps things are going that way but I suppose I think of it as the equivalent to what a demo tape before a first album used to be. Does this make any sense? Anyway. Marty, who you may remember from The Nico Missile, Pig Flayer, and Red Devil Ryders and who you really ought to remember because he shreds, comes out with an eight song tape here. At first I was gonna call it garage rock but that would be a bit misleading because I think at its core this is actually far closer to power pop, it just has a grungy production style and freewheeling sloppiness (affected or not, I can’t decide) that begs you to call it garage but most of it just isn’t quite garage. This is in no way a slight and I hope it doesn’t read that way– I love power pop and would love to see Marty openly do that kind of thing. The first three songs here are all excellent– “Meet Me Outside” is the perfect hooky opener (and it has a dramatic “bum ba-bum” bridge that I love– you’ll know exactly what I mean when you hear it); “Someone Real” has a little bit of the ‘80s vibe melodically that’s worked so well for Marty’s contemporary and sometimes bandmate Ricky Hamilton; and people might think this is a weird comparison but something about “Crystal Clear” reminds me of “Rose Parade” by Elliott Smith. “Lori” closes out the first half here and is pretty decent garage pop with some excellent guitar work. The flip side opens with “Hot Connection,” a bit of a slower one with a great guitar solo, but it’s here that I’ll address my biggest criticism of this tape: the almost complete inaudibility of the vocals. You can pick up the melodies clearly and a phrase or two every so often, but they’re swamped in reverb and buried in the mix. I get that it’s a stylistic choice but at this point it’s almost a cliche move and I’m sure Marty has interesting things to say in his lyrics, so why not let us hear them? “Hot Connection” and “Meet Me Outside” are probably the worst offenders but it persists through the whole tape. Just my two cents. We get a cover of The Rolling Stones’ classic “Dead Flowers” transposed nicely to the Marty Brass style. It’s obviously a great song and a decent version (although I wish he’d stuck with the original harmonies) but in a way it’s the least interesting and least successful track here. “The Green Corvette” is another garage/punk/pop tune and in “Keep It Swinging, Bob” we get a dumb punk rocker to close things out and why not? So yeah, a very good and very enjoyable tape for the most part– certainly some room for improvement but definitely worth the listen. Marty Brass still shreds, some seven years on from the first time I said that in one of these reviews. 3.7/5

The third release under the Richard Hamilton moniker and the hits just keep coming. I suppose the past couple years have been prolific ones for our friend Ricky. “Psychomanteum,” the opening track here, is him at his best– a great lo-fi indie rock track with some hooky keyboards and a great pop melody. Other highlights include “Real Neat,” with its guitar riff slightly reminiscent of “Picture Book” by the Kinks (or that Green Day song that sounds like “Picture Book”) and some interesting guitar production choices which add to the already pretty good song and which I can only describe as…real neat; “Southern Girls (Deep Fried Pickle)” whose title made me doubtful but actually turned out to be quite good and I have to admit the payoff of the “deep fried pickle” part is actually pretty funny and clever; “Happy Go Lucky,” which, despite the somewhat awkward way the title lyric has to be delivered to fit the meter, is still almost annoyingly catchy; and “Lovers In Mobile,” perhaps the most punk track we’ve heard yet from Richard Hamilton and almost a throwback to his Nico Missile days. I also have to give him props for taking as potentially lame a concept as “Long Time Listener (First Time Caller)” and actually making an acceptable song out of it– the chorus reminds me a bit of Paul Westerberg for some reason and suspiciously enough, the subject seems to like all the same bands as Ricky himself does, from The Cars to Linda Ronstadt to Crime to Bryan Ferry. Probably just a coincidence. A few on here (“South Of France,” clocking in at nearly five minutes, comes immediately to mind) could’ve been better if they were shorter– sometimes that extra repetition of the first verse again does not add to the experience– and we do occasionally get the clumsy turns of phrase that, at his best, our pal Richard can make charming, but sometimes on here come out as just that, clumsy. Of the three Richard tapes thus far, this is the weakest, but that said, it’s still pretty darn good. If I hadn’t heard the other two and therefore could not make the comparison (which, whether this is a good thing to do as a reviewer or not, I cannot help), you could easily become a Richard Hamilton fan on this tape as it is. 3.5/5

Are you a local-ish band? Do you have a record out? Email vaguelythreatening@gmail.com or send it directly to the Observer: PO Box 770203, Lakewood, OH 44107.