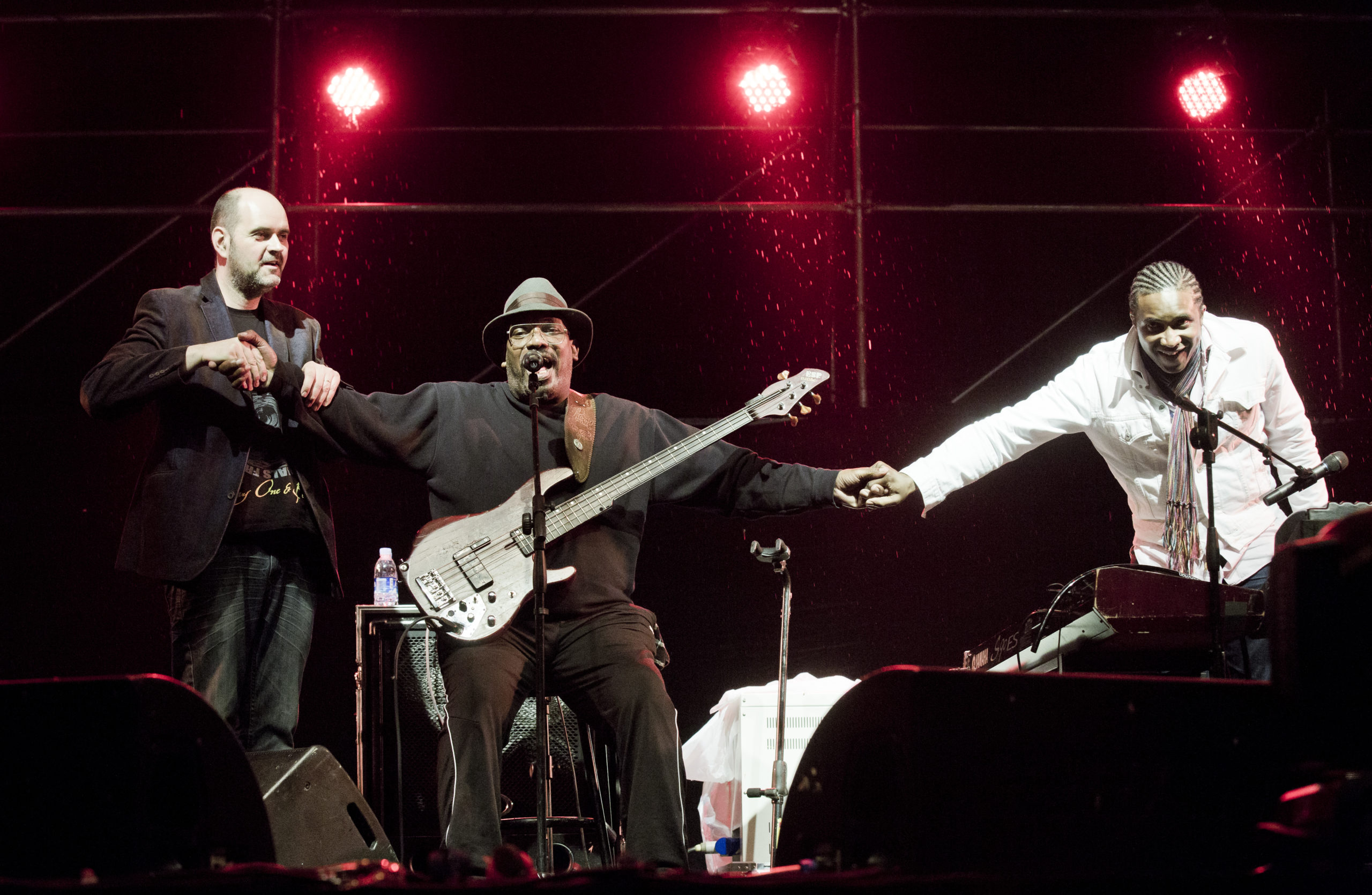 Today – March 18 2022 – marks one year since esteemed bassist Paul Jackson died, aged 73, after an illustrious career in music with a far-reaching legacy.

In 2014, Paul Jackson released Groove or Die on Whirlwind Recordings with Xantoné Blacq on keys and Tony Match on drums. Last year, the album was re-released on high quality, 180-gram LP in its first and only vinyl pressing.

Bassist, vocalist, composer-arranger, producer and educator Paul Jackson was known as a “Musician’s Musician.” A founding member of Herbie Hancock’s ‘The Headhunters’, Paul’s creative output shaped a new direction in contemporary music. He was one of the world’s most important and influential electric bassists – certainly one of the most studied and copied – and generations of bass players around the globe have been inspired by his signature grooves. {excerpt from Groove or Die album blurb}

A year after his death, we caught up with his bandmates Tony and Xantoné to reminisce about a beloved friend and extraordinary musician…

Discovering Paul…
Tony remembers that he first discovered Paul via The Headhunters, “they were a band, a way of living, creating…thinking….”

Xantoné also found Paul by listening to the seminal band, “I got into The Headhunters in the 90s. I was just getting my musicianship together whilst listening to Herbie Hancock’s electric stuff and Paul Jackson was all over it.”

When Tony and Xan met Paul…
“Our first show together was epic,” exclaims Tony. He continues: “we did a festival in Seoul and Paul decided to change the setlist on the day of the show. We knew we had to accept this challenge to gain his confidence. We shared the stage with the Robert Glasper Band, and Buster Williams was there too. So, from that time I knew this trio would be really special.”

Xantoné remembers that first gig with similar fondness: “we went to South Korea to play with Paul for the first time. Tony trying to be all organised had asked Paul, ‘please could you send over the list of songs we’ll be playing and performing so we could get familiar with them?’ Paul was like, ‘here’s the rough songs.’ But when we got to soundcheck, Paul said to us: ‘Oh no forget about that, we’re not doing any of that stuff’.”

Xantoné chuckles at the memory: “I was shown on a backstage piano what we were doing and that was a very old-school approach. I’ve worked with a range of people from that generation and I do respect the idea that music is a language. I remember that I was like fine, let’s go.”

“It was an open-air gig and it just rained like crazy – the audience didn’t give a damn. So that was our first gig with Paul. Definitely one to remember.”

Recording Groove or Die…
Xantoné remembers, “the thing that was really cool about this album is that it was the first time that I had recorded in a way that I’d heard many of my heroes record.” He explains: “they would go tour the music for a good period of time first and by doing that they were gauging which tracks went down well with audiences. So by the time they got in the studio they were hot on the music. That’s what happened with us. It meant that going into the studio to record was one of the most secure feelings I had of recording.”

“We already knew that the recording might be one of the last albums from Paul,” Tony remembers. “The session took place in an intimate recording studio in London and we recorded straight after touring Europe. The energy of the trio was great. Paul was already dealing with health issues, but we were all together ready as a band to record the best music we could.”

Musical chemistry…
“Paul always challenged musicians” says Tony, “I remember during The Copenhagen Jazz festival just before we hit the stage, he said ‘let’s do a version of Footprints’… I said ‘OK Paul, I’ll lock the groove and make an intro…’, he always like to challenge Xantoné too on stage. We were a family – after many tours in Europe, South Korea, Brazil, we shared great memories, jokes and stories together.”

No ego…
“Paul was 100% aware of his impact on many musicians,” states Tony, “but he was so humble and into the music. His influence will be major for many generations, many bass players and musicians too.”

“He was never someone who was like: ‘I’ve been here forever so I’m above you’,” adds Xantoné. “If I had to sum Paul up, I would say he was a fierce liver of life. He was humble in many ways, an innovator – no doubt – and something which people don’t realise – a killer singer.”

Remembering Paul…
“Paul was a big brother,” says Tony, “we had a special relationship as a rhythm section, he always made a joke on stage, looking at Xantoné he’d say: ‘I have my son on stage with me today, I’m really happy…’ and then he’d turn and look at me and say: ‘he’s on drums!’ Even living in Japan for so long, he was still in his Oakland Ghetto Mood.”

Xantoné says, “I feel very honoured in my life to have had the opportunity to work with Paul. I really do feel personally that Paul was a part of something that massively changed music. I remember that Paul wanted to live life to the full 100%. He was unapologetic about the way he was.”

Tony Match and Xantoné Blacq continue to work on their craft:

Tony Match: “Despite the COVID-19 situation, I’m focusing on new projects, I have a band with Fred Wesley, Martha High (ex-Singer from James Brown) and my trio with Vinx (great singer).”

Xantoné Blacq: “So for me, with the change over the last couple of years, it gave me an opportunity to be free(er) and more expressive. I have been composing for advertising and working towards composing for film. I had sold out gigs at Ronnie Scott’s in December – so I’m still gigging as well, but composing is something I am really enjoying exploring.”