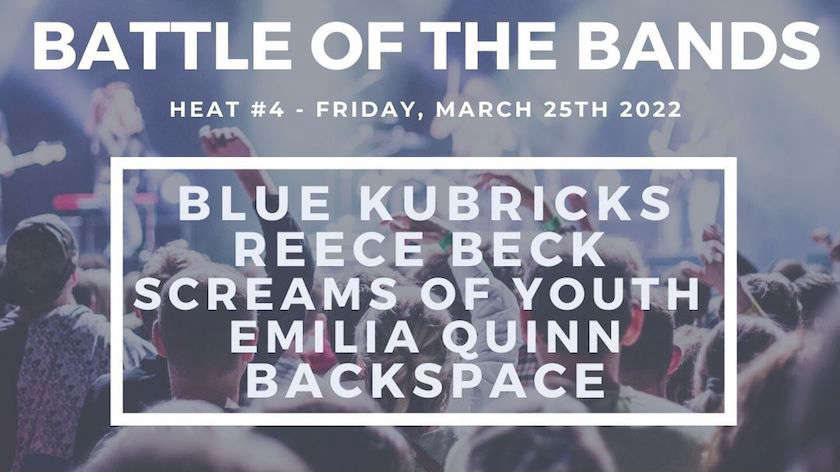 Another five acts are performing in Keighley this Friday night, hoping to win a place on the main stage at Skipton’s Gateways Festival in July.

Cliché Cult won the first heat at the start of the month; Wilko Wilkes won the second and then Cressa were victorious on Friday night (18th March)  – so all three are through the the final of the Battle of the Bands competition on 1st April.

On stage at the Exchange Music Venue & Arts Centre this Friday (25th March) will be another five acts hoping to make it through to the final of the process next month, and ultimately win a place on the stage in Skipton’s Aireville Park in July.

Tickets are free – on the door or in advance from exchangearts.co.uk

Here are the acts in the third heat on Friday from 7.30pm…

Blue Kubricks are an alt-pop-funk-rock band. Over the last 12 months they have released three singles, with accompanying music videos, and their debut EP, Manuka. Their latest single, Comfortable Ride, is an infectious alternative disco track that combines irresistible, upbeat grooves with unforgettable vocal hooks. It’s pop, but not as you know it! An exclusive Blue Kubricks track (Elizabeth) was also recently featured by northern label Come Play With Me on their ‘Boundless’ LP (compilation album), which ‘showcases some of the best new music from creatives of colour based in Yorkshire’. Blue Kubricks are renowned for their dynamic live shows – a reviewer for Local Sound Focus described their recent performance at The Wardrobe in Leeds as ‘red hot music and a show to match’. Other performance highlights from the past few months include playing the BBC Introducing stage at Tramlines festival and supporting The Luka State on the Leeds leg of their European tour.

Melodic anthems with a youthful rawness harking back to a 90s DIY culture, Reece Beck are a 5-piece Indie Rock band from Skipton consisting of Vocals (Luke Midgley), Lead Guitar (Harvey Holme), Rhythm Guitar (John Greenwood), Bass Guitar (Owain Turvill), and Drums (Jack Barugh). The band met at school while attending Upper Wharfedale and South Craven schools. Formed in April 2021, they have started to build up a reputation gigging locally in the Skipton and Keighley area, and have recently started expanding into the Leeds music scene playing shows at The Lending Room and Santiago Bar in January 2022. Musically they combine the songwriting sensibilities from from Indie Rock staples like Oasis and Arctic Monkeys, with the atmospheric sound and production style of modern-day artists such as Inhaler and DMAs. They have been in the studio recording recently producing their own tracks and have music with memorable hooks and an immense sound on the way very soon.

Screams Of Youth (formerly Revolver) are a three piece band with Ben as the Guitarist and vocalist, Thomas as the Drummer and Tom as Bassist. Their music is heavily inspired by bands such as Radiohead, STP and Pink Floyd. They write all their songs and love to play live.

Emilia has been described as a firecracker, breaking the mould of modern Americana and roots music by bringing her own unique spin. With powerful yet husky vocals, her songs tell stories while blowing audiences away with musical skill. Spanning from badass anthems to heart-felt ballads, Emilia reaches deep into her soul and presents it with astonishing honesty on stage and in her records.

BACKSPACE are a Leeds based indie Alt-Pop band, formed in 2017 by friends, Harry, Alex, Rosie, Miles and Harry. With infectiously catchy songs likened to bands as diverse as Wolf Alice, The Cure, False Advertising, The Orielles to L.A. Witch and Young Marble Giants BACKSPACE are regular additions to the bill at some of Leeds’ best venues and have supported the likes of Elephant Trees, Apollo Junction, Alex Tracey, Conflare and Artio. Now with Harry at uni, Alex has taken up the beats and Izzy had joined the band on rhythm guitar.