On March 22nd, across Australia over 30 independent media outlets will stop publishing news for 24 hours in a collective freeze to fight for the future of Australian news media, called the #WaitingOnZuck campaign. The news black-out will let the world know that small and medium news publishers are waiting for Facebook to pay for journalism and content that appears on the platform. 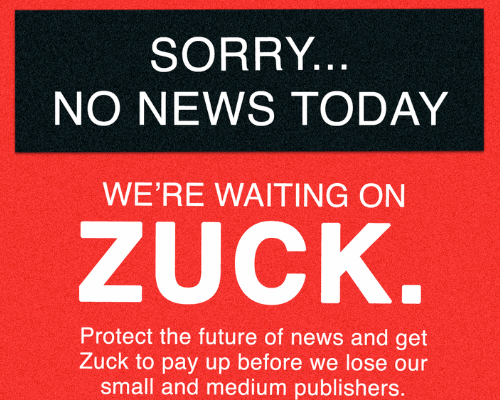 The publishers are currently waiting on Zuckerberg and his businesses to come to the negotiating table and make commercial deals that are transparent, fair, and pay for independent journalism. The news black-out warns of a future without independent news if publishers don’t get a fair deal and a level playing field.

The #WaitingOnZuck campaign, which will replace news feeds for 24 hours, encourages Australians to email Josh Frydenberg and let him know that Mark Zuckerberg will continue to erode the Australian news media landscape without greater accountability for Facebook to negotiate with independent publishers.

Twelve months ago, the Australian Federal Government passed the News Media Bargaining Code into law, led by Federal Treasurer Josh Frydenberg. This Code aims to reduce the imbalance between Australian news media businesses and digital platforms, specifically Facebook and Google. Under the Code, the digital platforms are legislated into commercial negotiations with local media companies. Facebook has negotiated deals directly with the large media networks; however, they have failed to negotiate with most of Australia’s independent publishers. The unintended consequence is that independent news businesses without an agreement are at a significant competitive disadvantage.

Federal Treasurer Josh Frydenberg (and the Department of Treasury) is currently reviewing the impact and effectiveness of the Code. The Code requires designated tech platforms to strike commercial deals with Australian publishers; however, Facebook and Google have not been designated. As part of the review, designation is being seriously considered for both platforms.

The #WaitingOnZuck campaign is created by D.O.A., which stands for Decade of Action – a consultancy focused on social purpose, led by Ebony Gaylor.