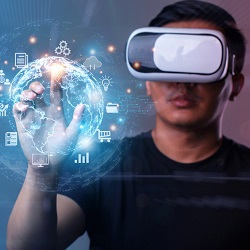 Metaverse: Your office of the future?

Computer geeks will tell you that the next big thing in technology is the metaverse, a kind of digital virtual space that exists in cyberspace and uses virtual reality (VR) headsets to access.

What does this have to do with lawyers, you may think? The truth is this: it’s anyone’s guess at this stage, but the technology is predicted to offer great connectivity opportunities to business, which means lawyers could use it as another tool in their box. In the US, they have already started to do so.

At the moment, most of the giant tech companies such as Facebook, Apple, Microsoft and Google are working on versions of the hardware necessary to create and access the metaverse. Google first dipped its toe in the head-mounted optical display market with Google Glass in 2014, but things have moved on since then.

Facebook’s chief executive, Mark Zuckerberg, was so excited about the metaverse he renamed the company Meta, although it remains to be seen whether the name has stuck.

So far the technology has been mainly exploited for entertainment, but business is not far behind. A large number of video games have been produced for the metaverse, such as those on Facebook’s Oculus platform.

While your fellow competitor may be physically in a different city or continent, you are both represented by a human-shaped avatar and you can interact by voice and move around while remaining static in real life. More active sports tend to have the action come to you, so you can remain in one place physically. You move your avatars using joysticks and similar controls.

Right now, the hardware you must wear to explore the metaverse is like a helmet or ski goggles, sometimes with a belt pack attached, but in future it’s possible it may just be a pair of glasses or something small and unobtrusive. At present, you wear bracelets on your arms so you can hold clubs, bats and so on, and your arm movements can be transferred to those of your avatar within the game.

Business enablers of this new digital world include the largest, Decentraland, which has a market capitalisation of over $5bn (£3.8bn) and describes itself as a “finite, traversable 3D virtual space”. It sells blocks of ‘land’ as a “non-fungible digital asset maintained in an [blockchain currency provider] Ethereum smart contract”, complete with its own cryptocurrency.

An American law firm that has purchased a parcel of land and built its own (virtual) office is Grungo Colarulo, a personal injury practice in New Jersey. It believes the metaverse “has the same game-changing potential that social media had in the late 2000s” and its senior partner reportedly observed: “Traditionally law firms are slow to adopt these new opportunities.” Among others, the firm has claimed to be the first to set up in the metaverse.

Another US law firm to hang up its digital shingle in Decentraland is ArentFox Schiff, which has real-world offices across the country. Its blockchain and digital assets group tells clients that the metaverse “offers new possibilities for brands to create value and engage its customers. A key part of advising on this new wave of technology is taking part in it”.

It is quite possible that, in the future, where now people communicate via two-dimensional video-conferencing software like Zoom – and which lawyers can use to provide their services to clients remotely, as well as gain access to courts or tribunals – they will meet in the metaverse as if they were in the same room, even though they are actually in different continents.

Lawyers should at some point be able to access legal databases on their screens, invisible to the client. Natural language artificial intelligence (AI) software could listen in to the conversation, providing contextual information such as precedents and analytics.

Similar tech could be used by advice agencies, with non-lawyer staff becoming instantly expert in unfamiliar areas, accessing massive databases of consumer law cases and helping clients much faster than before; aided by AI but also providing a reassuring human (inter)face.

It is possible also to envisage that recent AI could be used to make avatars much more realistic, so in effect a digital version of the user would appear instead of today’s rather clunky-looking depictions. In this future digital world, you could appear more or less as you really are, sitting at a desk and engaging with a colleague or client across the world and both of you will feel you were physically present at the meeting.

Imagine machine-learning tech such as deepfake, which has been used to superimpose video images on genuine footage to create realistic fakes, might be used to produce avatars that look convincingly like yourselves.

To use this technology with benign intent might mean you feed it legitimate video of yourself, with the object of applying the result to your digital avatar. So from a client’s or colleague’s point of view, with the relevant headset on they might feel they were sitting in the room with you.

The bank JP Morgan produced a research booklet in which the authors described the metaverse as “a seamless convergence of our physical and digital lives, creating a unified virtual community where we can work, play, relax, transact and socialise”.

Our brains are tricked into believing we are actually in it “by adding an immersive three-dimensional layer to the web, creating… authentic and natural experiences”.

The bank forecast that the metaverse had “the promise of facilitating accessibility from the comfort of the home, breaking down boundaries and democratising access to key goods, services and experiences”.

Other commentators have since predicted roles for the technology in the field of estate agency, education and medicine.

At a more personal level, you might imagine attending a wedding, say, halfway around the world, without leaving your living room and feeling you were there – and others would feel you were there too – sharing the happy day.

When we say the law has changed a lot over the past decade, it could well be that we have seen nothing yet.