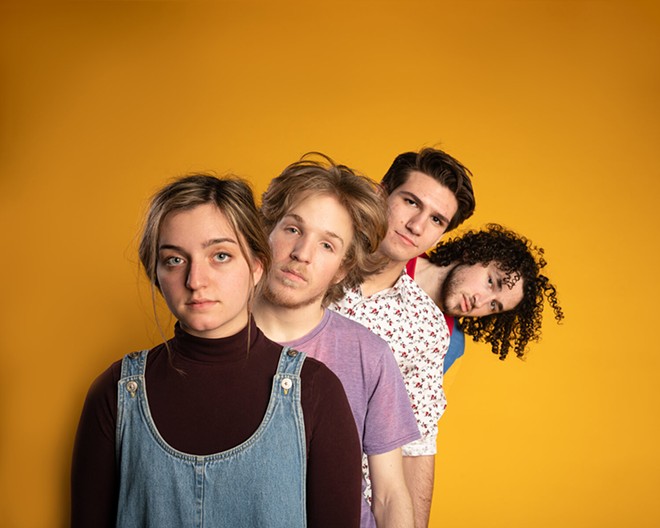 Since 2015, indie rock band the Doozers has been one of Detroit’s best-kept secrets, though the secret is getting out. The band performed as part of the 2019 Mo Pop festival, and has booked lots of local shows, keeping pace with undeniable feel-good beats.

The colorful world of the Doozers is made up of Sean Donnelly (guitar and vocals), Melanie Kelley (bass), and Kyle Garland (drums), who have all known each other since middle school. The band formed after they all attended the Rochester School of Rock, initially as a quartet with Charlie Belleville on guitar.

“Sean picked up the name from the 1980s TV show Fraggle Rock,” Garland tells Metro Times. “The little green construction workers in the show are called Doozers. Sean presented the name to the rest of the band and it stuck instantly.”

The Doozers seamlessly blend elements of early 2010s indie, shoegaze, and surf rock to create a warm sound that’s refreshing and familiar. There is a richness in the band’s melodies, while maintaining a minimalist approach. Garland cites acts like the Strokes, Foals, Arctic Monkeys, MGMT, Tame Impala, Cage The Elephant, Mac Demarco, and Joywave as influences, to name a few.

The band’s latest single, “Great Barrier Reef,” has more than 26,000 streams on Spotify, and is the perfect song for the beginning of the spring, though its pop sound is perhaps betrayed by its lyrics. Garland says the track “is about the feeling of being stuck in your head, circling thoughts, and stressing about the same thing day after day.”

Not only are the members of the Doozers talented performers, but their music videos are just as vivid as their music, with Wes Anderson-style aesthetics: bright colors, vivid imagery, and silly plotlines. Taking cues from youth programming, their videos are fun to watch.

“We owe the video creativity to our friends Maddie Shubeck, PJ Michalski, and Martin Milat,” Garland says. “We do like to embrace a colorful aura… We just like colors! The attitude of the band is very easygoing and carefree, which was how the music videos were directed. There were many times where Maddie or PJ would tell us, ‘All right, for this part you can do whatever.’ And that’s when our goofy selves would come out.”

You can catch the Doozers performing at Small’s Bar in Hamtramck on Wednesday, April 20. QTip Bandits and Dirt Room are also on the bill.