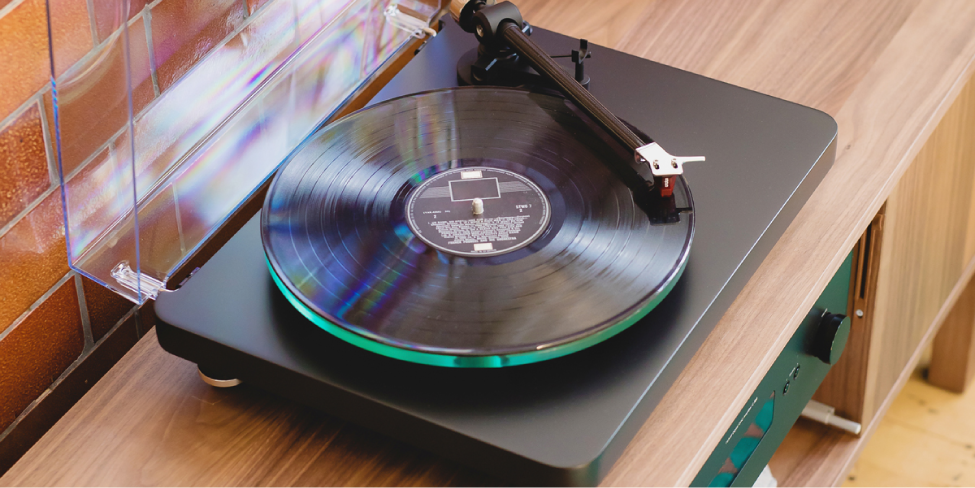 How did a music format that was dwindling in the 1980s suddenly become one of the most popular forms of listening in the 21st century? If you’ve ever walked into a record store in the last decade, you’ll know that vinyl is everywhere, again. In lieu of the soon-approaching Record Store Day, let’s have a look at the history of this cherished musical medium.

Looking Back on Recorded Music
One of the earliest inventions to play back recorded music was in 1877 with Thomas Edison and the Phonograph – a device used to record sound using rotating cylinders. It wasn’t until 1888 that German-American inventor Emile Berliner came out with the Gramophone. The Gramophone played music using Berliner disks which were five to seven inches across and doubled in capacity compared to an Edison cylinder. Since Berliner discs could be stamped with lower record costs, whereas cylinders were difficult to reproduce, the Berliner disc pushed out the Edison cylinder. The first commercially available recordings were early in the 19th century but sales took off only after 1920 when electrical recording became possible. After D-Day in 1944, American troops predominantly brought along records like jazz and big band music with them to war.

The Format Wars
Before 1950, record discs were primarily made of shellac and spun at 78 RPM. It wasn’t until 1951 that vinyls were commercially available at new standards of 45RPM or 33RPM. The LP (long play) discs manufactured by Columbia Records spun at precisely 331/3 RPM and could play up to around 23 minutes per side. On the other hand, the EP (Extended Play) disc released by RCA Victor were known to help artists sell shorter length albums with two songs per side spinning at 45 RPM. Around 1953, microgroove records were made available to consumers. They were made from a material called Vinylite – a plastic poly vinyl chloride compound that could maintain the longevity of a record and sound miles better than shellac records due to their durable medium, and much lower surface noise.

The Fall of Vinyl – Tape Cassettes, CDs and the Digital Age
Fast forwarding in time – when the Sony Walkman was released in 1979, everything changed. As described by its name, the “Walkman” allowed you to take music wherever you went – school, bus, walk, park – using revolutionary magnetic cassette technology, you could carry around your Walkman and listen to your favourite tunes without having to sit at home in front of the turntable. In turn, vinyl record sales took their biggest blow in the years preceding the Walkman, as technology and digital music age continued progressing. Eventually, the release of the CD in 1979 dominated the record industry – its perfect, digital recording capability and ability to hold 79 minutes of uninterrupted music (Sony insisted on this length to accommodate Beethoven’s 74-minute Ninth Symphony), easily overshadowed the scratchy, crackly, overpriced option of vinyl. Automobile companies adapted to installing CD players in cars, and by the mid ’90s, CDs dominated record sales. But it doesn’t stop there. From 1985 onwards, the record industry experienced a rise and fall of various music formats – the CD surpassed vinyl, illegal music downloads crippled CD sales, and eventually iPods, iTunes and Spotify streaming outsold physical copies of music altogether.

The Great Resurgence
But nearing the end of the first decade of the 2000’s and after the introduction of Spotify in 2006, something interesting began to happen. A niche community of vinyl enthusiasts persevered in pressing and using vinyl. In the club scene, DJs preferred using turntables and vinyl for the retro aesthetic and ability to mix, scratch and transition their songs in a live setting. Hip hop performers went back to old school records to get samples and grooves. Many bands never believed or bought into digital formats and stuck it out on vinyl. Vinyl was turning into a novelty and certain vintage vinyls became high in value. Record collectors, audiophiles and music enthusiasts took pride in their personal collections, starting a new movement of vinyl appreciation. As a snapshot, vinyl sales in 1997 were less than $150 million globally, accounting for a minute fraction of overall music sales. In 2006, that number would fall to $30 million – worldwide. But in 2008, there was a sudden reversal of LP sales and for the first time since 1984, vinyl sales rose – not by a small amount, but by a whopping 89%. In 2013, vinyl records were worth nearly $220 million globally, and by 2021, one out of every 3 albums sold in the US were vinyl LPs. The sales of vinyl in the US for 2021 alone hit $1.037 billion.

Why Do We Still Love Vinyl?
If music appreciation was only about convenience, vinyl would have never gotten the time of day after being trumped by various technological advances. But there is a certain beauty and element of nostalgia that continues to draw people – young and old – to this medium. Not to mention, it’s elegant display of album artwork and collector quality makes it a great gift. Events like Record Store Day is an international holiday on the third week of April and artists gear up for this event with special, limited-edition releases. Although turntable technology has revived over the years, its fundamental mechanics have not deviated from the turntable’s heyday in the ’70s and ’80s. In fact, certain vintage turntables are well sought after and still rival modern day turntables, significantly bringing up their current value as collectible items.

NAD is no stranger to turntables with many, now sought after, models from 1973 up to the NAD 5120 which caused quite a stir with its innovative flat tonearm and catered to appreciating vinyl lovers with great quality turntables. While the basic operation of a turntable seems simple, extracting all the musical energy from the record grooves without exciting destructive forces on the groove requires both science and art. Both the C 588 and the C 558 hit a sweet spot for performance and value by using high-quality parts and precision engineering to work together in perfect harmony.

May 24, 2022 5
Ash announce reissue series and ‘Free All Angels’ gigs with Charlotte Hatherley