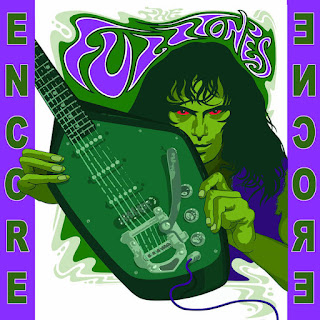 In 2020, The Fuzztones released a tribute to New York
appropriately titled NYC, which found
the group covering the music of other New York artists. Now they’re following
that up with Encore, which also
features some delicious covers, including some great songs from the late 1960s.
The band is now made up of Rudi Protrudi on vocals, guitar and bass; Lana
Loveland on organ; and Marco Rivagli on drums. On this release, they are joined
by several special guests on various tracks, including Steve Mackay of The
Stooges and Wally Waller of The Pretty Things. Also, I just have to mention that
the colors of the album’s cover and the disc itself, purple and green, are my
two favorite colors, and apparently this album is available on colored vinyl,
on, yes, both green and purple (how do you choose which color to get?). The
vinyl edition, however, does not contain the final two tracks (listed as bonus
tracks on the CD).

The disc opens with an original tune, “Barking Up The
Wrong Tree,” written by Rudi Protrudi. It is a whole lot of fun, a garage rock
gem with a reference to “Hound Dog” in its lyrics. “You ain’t nothing but a hound dog, baby, out to bury your bone.” The
lyrics also mention Iggy Pop. This song makes me so happy, nearly giddy. I love
that short guitar lead halfway through, and I especially love that section
where it breaks down, feeling like a cool punk song. “I know it’s retro to be hetero in this day and age/But I ain’t even
semi-metro, although it’s all the rage.” They then deliver a great cover of
a fantastic song that you might not have heard, “Plastic People,” originally
recorded and released by The Wildwood in 1968. It’s a psychedelic garage rock
tune, and these guys really tear into it. “Look
at all the plastic people/Most of them acting strange/None of them know where
they’re going.”  Wonderful stuff. They
follow that with an even more obscure song, “Marble Hall,” which was originally
recorded by a group called Marble Hall. So, yeah, add Marble Hall to the list of
bands who have a song sharing the group’s name (bands like Bad Company, Focus,
I See Hawks In L.A., They Might Be Giants and Night Ranger). It’s a wild song
originally released as a single on Aquarius Records in 1970. The Fuzztones give
us an excellent, faithful rendition.

“Eyes In The Back Of My Head” has a good driving hard
rock sound and a lot of energy. This is a more recent song, from The Bevis
Frond’s 1988 album Inner Marshland
(it was then covered the following year by Outskirts Of Infinity). “In the dark, I can see so clear/I know when
someone’s getting too near.” Ah, that’s handy during the pandemic. The
woman behind me in line at the store yesterday kept getting too close to me. I
would take a step away from her, and she would step closer again, until I
stared right at her, silently daring her to do it again. She did not. “‘Cause I see you for what you are.” That’s
followed by a cover of Rare Earth’s “Land Of Nod,” a song from that band’s
debut full-length album, Dreams/Answers,
released in 1968. This one begins with a low rumbling, and a voice announces “All aboard for the Land of Nod,” and the
song kicks in with a delicious force. Lenny Svilar joins the group on guitar,
and Alex Tenas plays drums. And this is the track that features Steve Mackay on
saxophone. He delivers some great work here. I also love that stuff on keys.
Sure, some of the lyrics seem dated, but this track rocks, and is another of
the disc’s highlights.

Then Wally Waller, of The Pretty Things, joins the group
on bass for a wild, popping rendition of The Pretty Things’ “Alexander,” the
final of the EP’s tracks on the vinyl edition. Lenny Svilar plays guitar on
this one too, and Mike Czekaj is on drums. If you haven’t heard this fantastic
song before, here is a taste of the lyrics: “Poet dies, stabbed with the knife of words/Young girl marries with
bouquet of letters/One life explodes and slides into the sea/The city lies
buried beneath the curses.” Yeah, pretty damn good, right? There is an
interesting story behind this song. In 1969, a fan of The Pretty Things named
Philippe Debarge hired the band to write and perform an album on which he would
provide the lead vocals. “Alexander” was one of the songs on that album. The
album itself was not released at the time, and in fact not for another forty
years, by which time Philippe Debarge had died. So he never got to see the release
of the album he commissioned.

The last two songs on the CD are listed as bonus tracks.
The first is a cover of my favorite Grass Roots song, “Let’s Live For Today” (I
used to put this song on a lot of mix tapes). Apparently members of that group
join The Fuzztones on this recording, though I’m not sure just which members
play on this track. As far as I know, none of the surviving early members still
play with that group. At any rate, it’s a good rendition. There is an echo of
the word “you” just before the first
chorus. Interestingly, they then don’t include the echo of “please” toward the end. The disc
concludes with a cover of The Sonics’ “Santa Claus.” I’ll certainly be adding
this track to my holiday play list. Yes, it feels a bit early in the year to be
thinking about that, but as we all know by now, time is rushing by and the year
will be over  before we know it. This
track features lots of fuzzy guitar work and some great stuff on organ. “I don’t get it/I’ve been a good boy all
year/I watched my Ps and Qs/I didn’t know nothing wrong.” As the track
fades out, he playfully mentions MTV, something not in the original recording,
of course.