Every now and again, Barry aka Apta, over at Piccadilly Records chooses his favourite selections from the new releases that have landed on their shelves. Here’s what he’s selected this week, and why:

Record Store Day is an important time in the calendar for indie record shops, and most importantly is a lot of fun behind the counter. We’re coming up to my eighth RSD now over a couple of different shops and it’s not lost any of the vibe or ceremony that I felt the very first time. The queue keeps getting earlier and earlier (I wouldn’t even CONSIDER complaining that I have an early start to all those nigh 24-hour campers in the queue, they’re the real heroes here!)

So when I arrive before 8 am, the excitement is quite palpable and we’ve got the whole endeavour down to a fine art now, so a big shout out goes to Darryl and Laura for their impeccable organisation and to YOU for continuing to pop down on this day as well as every other day of the year. Below is a list of some personal highlights and shop favourites, and a few records that you’d be daft to not consider adding to your collection. 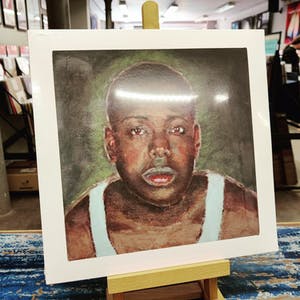 The previous EP’s from LA’s Gabriels have been absolute runaway hits in the shop, and for good reason. The Bloodlines EP sees its first release on lovely red vinyl and looks to continue the stellar response we’ve witnessed thus far. Lusk’s voice is the true star here, giving a hint of airy 60’s soul, cracked but perfectly pitched, hinting at gospel with soaring string sections and backing singers offsetting the woozy, trundling avant soul instrumentation. There are moments of fractured R&B, with string samples and downbeat percussion, but things are brought back to the melodic realms with a bright and evocative juxtaposition of almost-spoken word vox and uplifting chord progressions. Further evidence (as if any were needed) that Gabriels are only going to continue getting more and more popular. 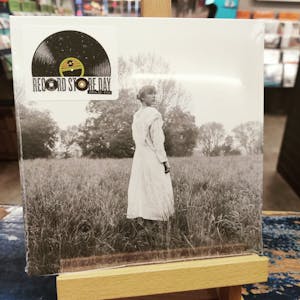 This year sees the RSD ambassador role go to pop songwriter extraordinaire, Taylor Swift, and to go with that we get a 7” version of her superb single The Lakes alongside an orchestral-backed ‘Original Version’. The original was on one of her most recent LPs, Folklore released along with companion LP Everlong soon afterward (both superb, by the way, with the latter being the slightly more mellow number, with a few fewer poppy hooks), but the ‘Original Version’ hasn’t been released before on vinyl and provides a perfect cinematic counter to her normally quite restrained arrangements. It’s a wonderful 1-2, and a perfect entrance point to her superb recent output. I’m a big fan of pop, and Swift is one of the best there is. 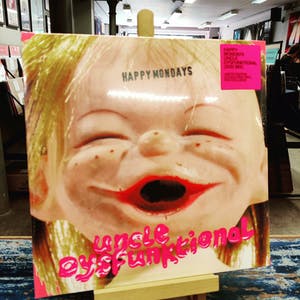 Though the early LP’s of The Happy Mondays were rightfully lauded for their mixture of dancefloor psychedelia and mac-adorned swagger, it’s rare that people really consider their later LPs as worthy of herald. Well, I’m here to tell you otherwise, as I firmly believe that Unkle Dysfunktional is actually a much better LP when distanced from the vehement fervour of the whole ‘Madchester’ movement. I’m not saying that it’s in any way a bad thing that our fair city spawned such a groundbreaking style (quite the opposite, in fact), but it’s doubtful that tunes like Jellybean or the wonderful Avant funk groove of Deviants would compare stylistically their early work and in fact sounds much better nowadays as a standalone piece of psych-funk strangeness, and available in the UK for the first time on vinyl. 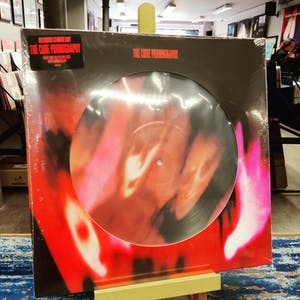 This week also sees a picture disc release of The Cure’s fourth studio LP from 1982 (not their fourth *in* 1982, they’re not King Giz). Stylistically it was a much more obtuse and sprawling effort than their earlier works and was clearly written by an exhausted and emotionally fragile Robert Smith. There are moments of levity, but this LP is really where Smith’s trademark Big Hair and lipstick-smeared face took off, with the gothic undertones of the music coming to the forefront and the moody majesty of standout singles The Hanging Garden and the bleak synth-led beauty of Cold both cementing The Cure’s place in many a collection. Thoroughly, devastatingly brilliant. 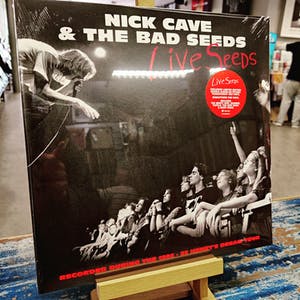 A wonderful double LP set (on transparent red vinyl) of some of the finest live tunes from one of the greatest performers of our generation. I could stop right there, but I won’t. For the uninitiated, Nick Cave is a live force to be reckoned with, and any of his recorded live works (the beautiful stripped-back Idiot Prayer from 2020, or the 2013’s stunning KCRW album for example) are a perfect distillation of the in-person experience. It’s a great pleasure then, to hear these superb tracks from the Henry’s Dream tour in full force. Wonderfully immersive, full of drama, and ram-packed with Cave’s inimitable songwriting. What more could you want, really. An etching on the fourth side maybe, instead of annoyingly stretching out a three-side LP onto an unnecessary 4th side? 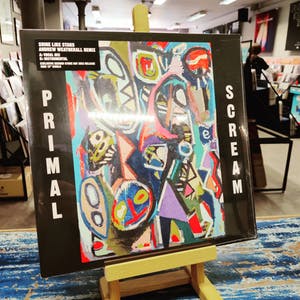 It’s flecked with gold this one, as was anything Andy Weatherall touched, and it comes from the beautiful Screamdelica 30th Anniversary 12” singles box, so has been previously available only to those willing to shell out the big bucks for the full collection. There’s the mindblowing full tune, a symphony of underplayed housey piano and grooving bass atop clattering percussion and cavernous reverb, brought together faultlessly into a danceable psychedelic wooze, as well as a vocal mix and an instrumental on the flipside for that traditional 12” vibe. A well worthy addition to any fan’s collection. 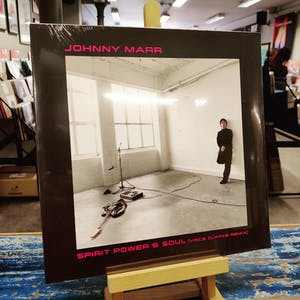 I can’t express quite how nice it was to have Johnny Marr in the shop a few months back, a truly lovely chap and happy to chat to folks WELL beyond his expected finish, so absolute kudos for that, but there’s also the little matter of him being one of our most treasured Manchester musicians and one of the reasons for Manchester being so prominently placed on the musical map. It’s lucky then, that Marr is still writing, still performing, and still releasing new material, and consistently coming up with the goods too. Fever Dreams is a brilliantly written body of work and goes to show that Marr is nowhere near done with us yet. ‘Spirit Power & Soul’ sees one of the standout tracks from the collection get reworked by the great Vince Clarke of Erasure, and backed with Human, a wonderfully effervescent B-side from the Fever Dreams sessions. 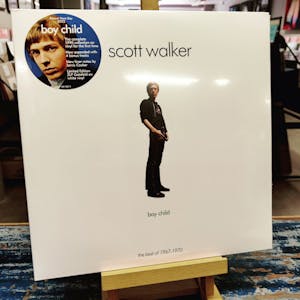 It can be intimidating to summarise an artist like Scott Walker to recommend to someone, with such a wealth of recorded material to choose from, and such a variety of styles covered. So what to do? Well, the *proper* answer is that you recommend a good ol’ best of! (“Tough one, I’d have to say, the best of the Beatles!”) Boy Child was originally out in 1990 and has a selection of tracks from his first five albums, and is without a doubt the best starting point for anyone new to this musical polymath, or indeed a great buy for anyone who wants to hear the ‘hits’ all in one place. This version includes Marc Almond’s original liner notes from 1990, Neil Hannon’s notes from 2000, AND a brand new suite of praise from the great Jarvis Cocker. Worth the price of entry for The Seventh Seal and Boy Child alone. Superb. 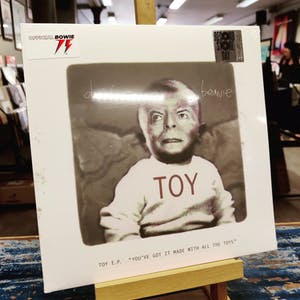 The box set that came in recently was a beautiful thing indeed but came in at a not-inconsiderable (but worthwhile) £120. The real piece from that collection that everyone was after was this little gem, slated for release in March 2001 and shelved only to be revisited earlier this year. We get a stripped-back version of the wonderful ‘Shadow Man’ as well as a couple of lesser heard live gems (‘I Dig Everything and ‘The London Boys’) and a gorgeous symphonic alternative version of ‘Silly Boy Blue’. Absolute peak Bowie, inventive and beautifully written balladry. 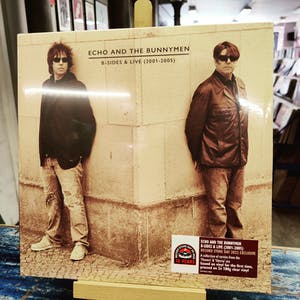 Previously only available digitally, Saturday sees the long-awaited vinyl release of this collection from both Echo AND the original Bunnyman. There are few sounds more evocative than the slo-mo gothic pop of Killing Moon (maybe that’s Donnie Darko lodged deep within my psyche talking), and on this clear vinyl 2LP exclusive, we get a beautiful live version performed at Reading festival in 2005, as well as a couple of acoustic versions to boot. Aside from the aforementioned, the real hits for me are the opening salvo of the psychedelic pop of Marble Towers and the baggy groove of Scratch The Past both bonus tracks from the Japanese version of 2001’s Flowers as well as their take on Ticket To Ride by some lesser known scouse outfit… 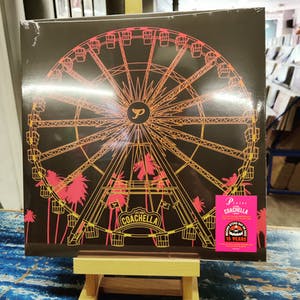 There are quite a few live albums on this list, I realise that and I know they’re often not everyone’s cup of tea but there are few experiences more fulfilling than going to a great gig or even more, going to a superb festival to hear a band you love playing. Imagine then, having one of the greatest bands of the past few decades reforming and playing a set at a festival that you just can’t attend. Lucky for you then, you get to hear this legendary outfit going through some of their greatest tracks on this beautifully presented double orange & yellow marbled vinyl. Where Is My Mind and Debaser are obviously in situ, as well as probably my favourite Pixies tune of all time, Velouria. A superb, all-encompassing selection and imbued with the palpable excitement of one of the world’s greatest bands coming back to entertain us all. 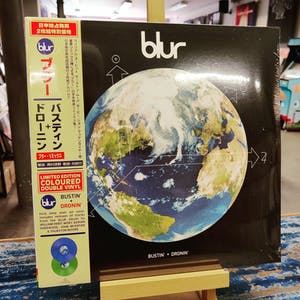 Originally available as a Japan-only 2CD (inc a Peel Session not included here), Bustin’ + Dronin sees a ton of absolute Blur classics pressed on a lovely double vinyl edition (one blue/ one green disc), remixed and reworked by some of the biggest names in the game. William Orbit tackles On your Own , Movin’ On, and Death Of A Party while the great Adrian Sherwood does a couple of versions of the latter, both different enough that they could be different tracks (the scattered dub / melodium swell of the Well blurred remix is a particular stormer), and we even get Moby twisting my own top-5 blur song Beetlebum into an ambient, drifty house number. Lovely collection and a really wonderful set of mixes from some of the most innovative producers around.