NO PLAN B: FRANK PALANGI 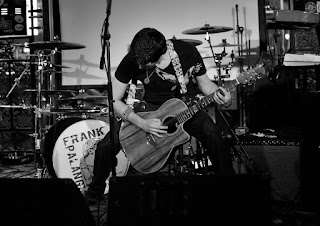 Raw, gritty and positive are three words that so accurately define and are more often than not use to describe Brooklyn, New York independent rock sensation, Frank Palangi’s distinctive sound. Just over a year ago, Frank celebrated 7 years as an independent rock icon and he has kept the ball rolling, and even picked up the pace as he rockets up the charts to rock music superstardom.

Having gigged very regularly on the east coast and surrounding regions of the US for several years, he is one of the most renowned indie acts in the region with a sizable fan base that cuts across several generations, right from young teenagers still in school to the much harder to please old school rock fans who know what the genre is all about, what it stands for and what it should sound like.

Frank is fully dedicated to his fans. When he’s not out gigging, he’s in the studio recording or writing new music, rehearsing, out shooting a video, or out making a movie. He also plays gigs online for his far away fans who can’t come to see him live or who he can’t get to on tour.

Frank is one of those artists that explores their creativity from every angle and pushes the limits of their musical instruments till they’ve got nothing left to give, and that doesn’t exclude his vocal cords. Screaming guitars, loud percussion, passionate verses, powerful, infectious grooves and insightful lyrics reminiscent of the likes of rock music icons like Metallica, Ozzy, Def Leppard, Megadeth, Creed, Godsmack, 3 Doors Down, Daughtry, Three Days Grace and Shinedown are just some of what fans look forward to when Frank is in town or has a new song or album scheduled for release. His latest record, “The Terminator” was released on the 12th of May on iTunes, Spotify and top digital music services, and word on the street is there’s more to come soon.

Being an avid filmmaker as well, Frank Palangi’s fans are never short of behind the scenes footage, live music performances and other visuals to watch. His latest was released on the 12th of July, titled “No Plan B”. Watch the video below, followed by a playlist of some of Frank’s top music videos to date.