Thierry Müller was always experimenting with unconventional guitars as well as keyboards and other electronics to create strange textures and sounds. At the same time he was a photographer and graphic artist.

Would you like to talk a bit about your background? Where and when did you grow up? Was music a big part of your family life?

Thierry Muller: In summary, I come from a middle-class family, shopkeeper father, stay-at-home mother. I grew up in Paris where my father had a store. I am the youngest of three children. There was not really a musical atmosphere at home. My father listened to some classical music to rest, my older sister listened to the French Yé-yé (Johnny Hallyday, Jacques Dutronc, Françoise Hardy, et cetera) and English hits (The Beatles, The Rolling Stones, et cetera) on his record player, it was the sixties!

I discovered “pop music” at the end of the sixties when I was around 11 years old with my brother, through radio and TV shows (Campus, Pop 2, et cetera), magazines (Rock’n’Folk, Best, et cetera), in college with a few classmates… And contemporary music from a cousin who gave electroacoustic workshops in the company where he worked.

When did you begin playing music?

My first approach was, if I remember, in 1969 when my cousin came to Paris for initiation workshops in contemporary music. He taught my brother and me how to manipulate tape recorders to generate and manipulate sounds. I must have had my first acoustic guitar around 1970/1971 then I had a small Bontempi organ, I learned by myself then with high school friends.

When did you decide that you wanted to start writing and performing your own music? What brought that about for you?

So there was no idea, but very quickly, as soon as I knew how to get sounds that suited me on my guitar or my organ when I barely knew how to play. Why? Probably because I needed that to express myself like with graphic design. It was complementary and above all necessary, communication having never been my forte.

You are also an established photographer and graphic artist. What can you tell us about this career path?

As far back as I can remember, I have always drawn, then I went to art school where I studied different mediums. Subsequently I became artistic director for publishers, magazines, cultural structures and advertising. I have never really been a professional photographer except for certain occasions. I mainly used photography for my personal projects. In 1974/75, I had my first Polaroid SX 70 and it was a revelation: being able to photograph, tamper with, abuse instant photos, make series…

What are some of the main influences when it comes to your photo collages?

Since my adolescence this media has always interested me, they are diverse. Those that come to mind out of order: Dada, Roman Cieslewicz, Max Ernst, Man Ray, Peter Beard, Hannah Höch, Karl Waldmann, Linder, Bazooka, I surely forget some.

What occupied your life before forming Ilitch?

I had the life of a “normal” teenager of the seventies, probably more interested than others in art in all its forms, drugs, politics… And a great need for inner expression from graphics and music, I think.

How did you meet Ruth Ellyeri and what led to the formation of the project?

Ha! The Ruth Ellyeri Mystery that hasn’t been on for some time! Originally Ruth M. Ellyeri is an anagram of Thierry Müller, a female double. This name was first created in 1979 for the title ‘Mescalito’ which appeared on a compilation (‘125 Grammes De 33 1/3 Tours’).

Was there a certain concept, and if so, is the concept still the same today?

Yes, I wanted to differentiate this concept from that of Ilitch. I kept it afterwards for fun and then as a kind of “bipolarity”! Ruth’s musical concept is almost the opposite of Ilitch, if not very different, more “popular”. It proceeds in the same direction.

It was done in a DIY style on an extremely limited edition. Hand painted cover… Briefly… this is my first “official” album under the Ilitch name released in 1977. They are “portraits” of girls/women, some of whom were my teenage sweethearts. It was recorded on a TEAC A-3340-S tape recorder and mixed on a Revox A77. I don’t remember how I found out about this company or person who did direct engraving. I had one copy made, a “collector’s edition”, which I gave to my girlfriend at the time and her mother (teacher), Françoise and Christiane being part of the ‘Portraits’.

All the tracks on the CD reissue already existed. By a combination of circumstances, the Oxygen label offered me to make an LP, so I had to choose tracks!

For side A, ‘Periodikmindtrouble’ was a no-brainer. On the B side, I wanted there to be a trace of ‘Innerfilmsequences’, it was difficult to make a selection that worked from beginning to end, luckily there were very long pieces that made it easier for me. It is obvious that at the time I could not guess what would happen next and that one could have existed and then the other completely.

I recorded DIY (Teac A-3340S, Revox A77) in my bedroom and a corner of a stowage that a friend lent me. The collage inside the cover is a ‘Periodikmindtrouble’ représentation. Other than that, I have no real recollection of the process and circumstances of these recordings. It’s been so long! It’s at that time I met Philippe Doray.

What’s the story behind working on ’10 Suicides’? The album included a sixteen page booklet with your photo-collages. Was that part of the “story”?

At that time I was extremely depressed and suicidal, moreover I had made several suicide attempts which, with hindsight, were more calls than real desires to end my life, although… 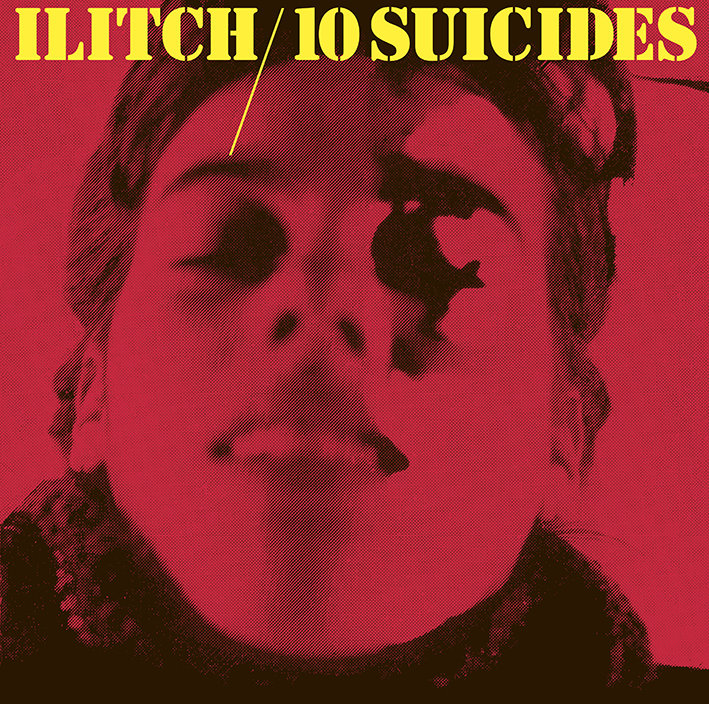 This album was designed as a sort of therapy to exorcise those I had done and those I had thought of illustrated in the booklet. Once again images and music were one.

‘PTM Works’ followed on the Eurock label, as well as the one-sided EP ‘Culture’. What’s the story behind these two releases?

I was a reader of Eurock magazine and I had sent ‘Periodikmindtrouble’ to Archie Patterson who wrote an article and distributed it. In 1980 he offered to publish a cassette. I made a selection of unreleased tracks and the graphics and sent it to him. He supported me a lot during that time. I think it was thanks to him that Ilitch was known. He was the first person, through his magazine and his distribution, who made known in the United States this new European musical movement of which I was a part. We have always stayed in touch and had a good time during his visits to Paris. He’s a wonderful person!

‘Culture’ was born from a meeting with Édouard Nono, visual artist, friend of my brother. I had a sketch of what was to become the music for ‘Culture’ and asked him to write me a text. When he gave it to me, I finished the musical part and asked him to save it. This record was included in his art magazine “Sgraffite”. He also wrote the text for ‘Mots’ on the album ‘Polaroid/Roman/Photo’.

In 1982 you began to work on a new project named Ruth, though Ruth Ellyeri wasn’t a part of it.

As I said before, Ruth’s concept was completely different from Ilitch’s. It was from this album that people gave a real existence to Ruth as a person. Why? It’s funny because, indeed, Ruth Ellyeri does not appear anywhere except in a very small dedication on the cover. I was very happy because this “double” of my personality had come to life. I let this mystery exist for a very long time.

What can you tell us about the recording of ‘Polaroïd/Roman/Photo’?

The recording of ‘Polaroid/Roman/Photo’ was done in two stages. The bases and the synth parts were recorded in the cellar serving as a studio in a farm in Normandy where Philippe Doray and part of the Asociaux Associés lived. I lived there for a little over a year. Then the acoustic parts were recorded and mixed in the professional studio of a friend in the suburbs of Paris. The final version of ‘Polaroid/Roman/Photo’ and ‘Mabelle’ were mixed at Synthesis, a very famous studio at the time, by Patrick Chevalot, a very renowned sound engineer/producer and friend of Philippe Doray.

Around this time you also started to work with Philippe Doray on Crash and released an EP called ‘Pile ou Face’.

During the finalization of ‘Polaroid/Roman/Photo’ Philippe and I launched the Crash project around J. G. Ballard’s book for live performances. The work of J.G. Ballard was one of our many centers of interest. The two titles on the EP’s which were released in 2009 are taken from recordings of the rehearsals for these gigs.

Then you devoted your time to graphic arts… But you still released three solo releases.

I was depressed when ‘Polaroid/Roman/Photo’ came out because of the bad distribution and promotion, which caused this album to go completely unnoticed when I knew it had great potential. The future has proven it! I concentrated on my activity as a graphic designer which took me a lot of time and I restarted on a more confidential musical activity from which three cassettes were released over three years in collector’s edition ‘D.Prune-Birthday Tribute’ of one copy for friend’s birthdays.

Is there any unreleased material left?

To tell the truth, no. When a piece did not satisfy me, I erased it or kept certain tracks on which I might want to rework or inspire me for other ideas. Some have already been used on previous releases, others are still pending. There are also a few tracks that I never finished for one reason or another. Maybe one day…

It’s really exciting to talk about your new album, ‘White Light’. How long did you work on it?

That’s spread over two years, from 2015 to 2017. It should have been released in 2018 but it took time to find a label then there were a lot of manufacturing problems: several bad pressings… Which delayed its release considerably.

Several health-related accidents have led me to reflect on the passing of time, resulting in flashbacks, disturbing feelings about memory and neurological disorders, the questions it causes, and a strange feeling that I tried to “translate” into these pieces. Together with ’10 Suicides’ it is my most introspective album. 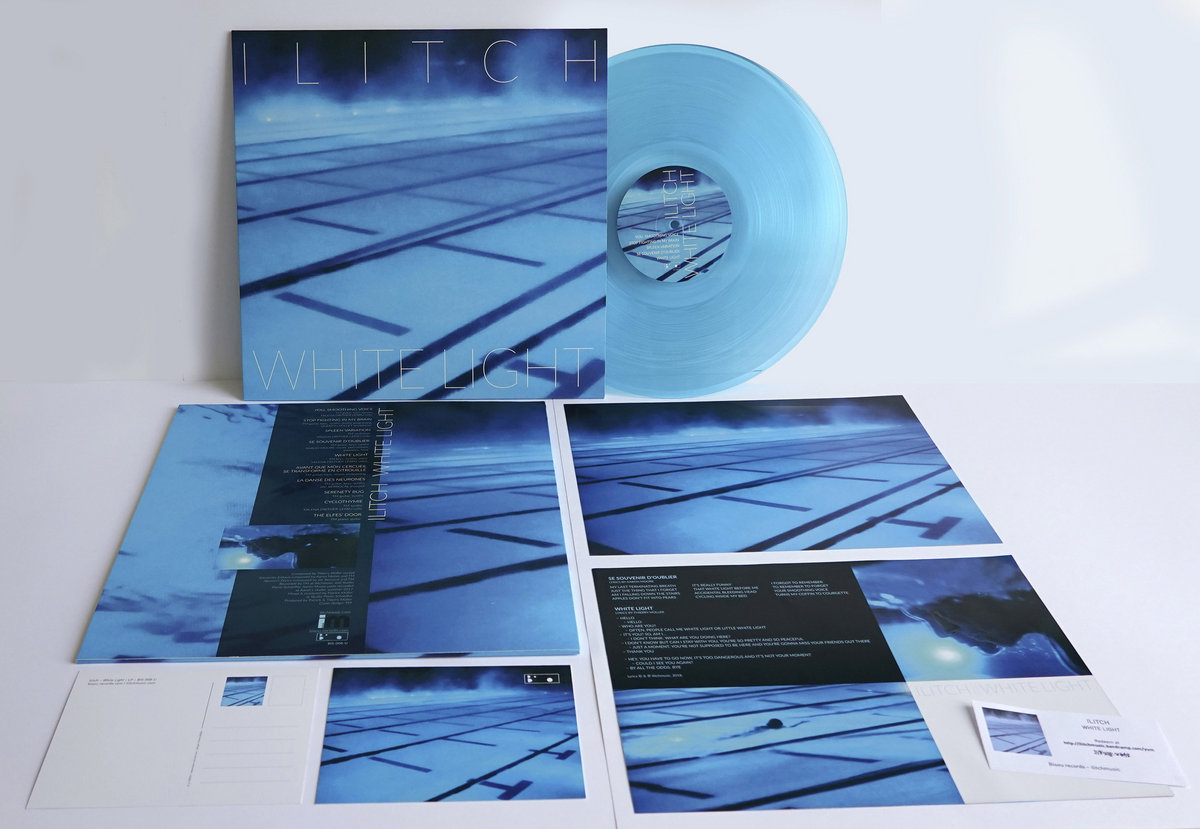 Looking back, which tracks are you most proud of?

I will be unable to answer this question. I think only listeners can answer that. I have always been and am proud of all of them and of the albums because they all represent a part of my life and were important when I made them and still are without distinction.

Where and when was your most memorable gig?

Of course it was the first one in 1975 at the theater of the House of Portugal, Cité Universitaire de Paris. The first and only time solo. A piece called ‘Un Jour Comme Tant D’Autres’ (A Day Like So Many Others). There was a very good recording of this gig, it came out in 2011.

And in October 2008, at L’Étrange Musique Festival at La Maison Des Métallos in Paris. To tell the truth, my second gig under the name of Ilitch, 33 years after the first one, I had set up a band for this occasion and I had made a scenography for the occasion. It’s on my Bandcamp: ‘Ilitch – Live at L’Étrange Musique, Acte II, 2008’.

What currently occupies your life?