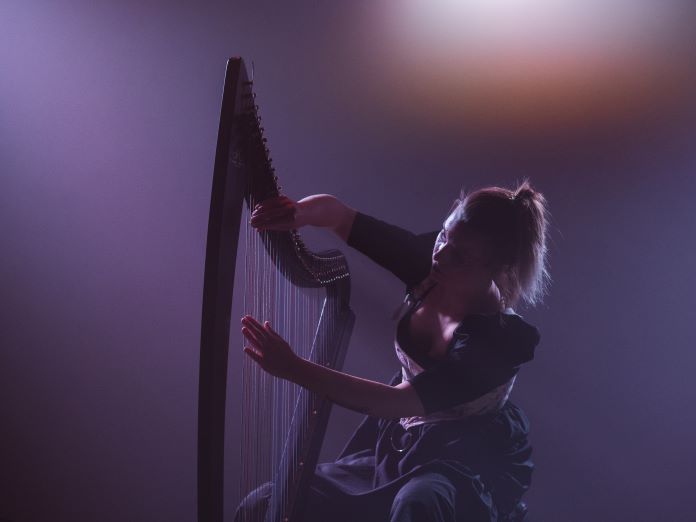 By James Thornhill
Photography by Kristína_Králiková

Just seven months after last being in Bratislava, Slovakia for Sharpe festival, its latest edition confirmed it is taking its place as one of the most vital “showcase” festivals in Europe. A gathering of music professionals, artists and a smattering of journalists, for the tiny British contingent, in particular, Sharpe is a window to scenes and sounds traditionally overlooked in the “west”.

As also highlighted at events like Tallinn Music Week, Nouvelle Prague and Ment, Sharpe is a testament to the sonic exploration and inventiveness apparent in the Baltic states and the countries of the former Soviet Bloc (as well as the wider continent), the rich folk traditions and constant awareness of on-going tensions to the East, providing an edge both alien and enticing for listeners used to the relative safeness of Anglo-American music.

The three evenings of live music, with conference sandwiched in between, was again wonderfully curated and respectfully managed, with limited clashes and a running-order flow that managed to allow each distinct artist their space to shine. And the ‘space’ Sharpe calls its home, a repurposed chemical institute transformed into a cultural centre, is a unique setting and performer in the event in its own right, one that screams of the regions penchant for supporting independent culture.

Across three floors, and an outdoor area in the shadow of a old grain silo, Sharpe 2022 was a hazey flow of incredible sounds, merging into one another across multiple stages. Timings and real-world concerns largely melted away in the bubble of music culture, one containing boundless hope and creative spirit.

As the haze lifted on the last evening, one moment of clarity uncovered the fact that the majority of the bill featured women or female-identifying artists, with the most diverting of sonic adventures being the creation of women. Sharpe 2022 was a puzzle made up with fragments of quality music, a distorted picture that is hard to make whole – these of the bits we made sense of.

Despite the utopian impression of borderless creativity and unity presented by events like Sharpe, the reality of the world wasn’t easily avoided, whether it is the lurch forward of the Far Right to the west in France or the devastating Russian invasion of neighbouring Ukraine, it all weighed heavy on the hearts and minds of those present.

Understandably, Sharpe gave a platform to the voices and excellent music coming from the war-torn nation to their eastern border. An opening address from Ukrainian popstar DaKooka, aka Kareryna Eremenko, saw her break her silence (started when the war began) to perform a new song that sat at an intersection of classically ballardry and pop, before a sobering panel on how to best help artists affected.

Following that the opening night was fully initiated by Miroslav Tóth and the Dystopic Requiem Quartet who, as well as other pieces, played Nénia pre Ukrajinu, a stark, composition penned to condemn Russian aggression. The Quartet put on a mesmerising performance that transcended simple classical sounds to touch on experimental electronics and, even post rock, with some of the darker moments sounding like Godspeed You Black Emperor and even having nods to metal in its sheer power. Truly intense.

As a counterpoint, producer Isama Zing’s performance took a template of electronic music and added globe-trotting journey through genre and sound, incorporating numerous players and singers. It was everything all at once, a sensory-overload that displayed the crushing possibilities of music in one hour-long show. This was the kind of optimism the world needs from music right now.

Back in October in a small room in Prague, I first witnessed Czech artist Amelie Siba who mesmerised with just guitar and voice, her songs almost cracking under their fragility but having an innate power. Her exceptional latest album Love Cowboys utlised a full-band to bring a dream-pop boost to her songwriting.

It is this full-band experience that Siba brought to the stage at Sharpe, her sweet, introspective songs of love, lust and loss carried on a wave of guitar distortion and big rock rhythms – a collision of shoegaze and pop performed with effortless skill. If early Angel Olsen cuts were covered by Slowdive the result would be Amelia Siba live. There is no doubt that Siba is an exceptional talent.

And ‘exceptional talent’ is a theme that ran through the three days of Sharpe, continued directly after Siba by Amsterdam post-punk band Global Charming who glistened with so much energy they could solve the energy crisis single-handedly, if their power could be harnessed. With an almost entirely new set, their latest music is a colossal evolution from the brilliant debut album Mediocre, Brutal. Tightly-wound funk rhythms, danced with big beats and stabs of distorted guitar in a melee of styles from afrobeat to go-go and classic post punk, that was nothing but thrilling throughout their set. All this was inch perfect in its delivery, whilst having a sense of looseness that gave it colossal charm. Global Charming is everything a live band should be, fun, challenging and inspiring all in the same moment.

Commanding the stage, Nina Kahout showed why she was selected to study at the prestigious Brit School. While as a singer her talent is undeniable, it is her songwriting and composition that help her to stand out. On stage, she unravels intricate narratives, more concerned with telling stories than rhyming couplets, carried by her soaring voice. Whether she performed at the piano or with an acoustic guitar the music danced with these narratives in a mesmerising way, packed with influences from classical music, folk songs, traditional waltzes and even elements of Arabic composition. Kahout is a young artist making her way into the league of Kate Bush, Heidi Berry and Tori Amos with her abilities to weave unconventional stories into song.

With all the lofty artistry on show, sometimes just creating a sense of fun can be as brilliant as anything. And with that Serbian band KoiKoi could be legends. An explosion of pure energy, it is like the band have cherry-picked the biggest, most vibrant moments from rock and pop and combined them into a danceable juggernaut of sound. The fact that this mess worked brilliantly is testament to how good they are as musicians. They lay waste to the venue, with a mass of sweaty, dancing bodies forced to dance. Who doesn’t want that?

Adele Mede is an entirely different force, finding power in patience. She used her incredible voice in myriad ways to enthrall the audience at Sharpe. Whether singing alone, her vocals filling the space, or looping her voice to merge with cascading noise and beats, she rode a wave of powerful simplicity. Every moment was considered, with her, at times, standing completely silent, mediating on the next sonic wonder. Mede was memerising, and as she ended her final number in which she slowly walked to different parts of the room, singing unaccompanied, using the acoustics of the space in real-time, a whispered “wow” could be heard next to me. That is all that needs to be said.

Slovak composer and singer, Ivana Mer took folklore-infused music to tell tales of travel and geo-political turmoil with crushing beauty. Accompanied by two musicians/singers whose voices complimented her own soaring tones, Mer’s aural narratives cut right to the heart of the world we live in, offering hope as well as reflecting sadness. Taken mostly from her latest album Earth, the tunes infused Slovak traditions with Latin American percussion and added a dream-pop sheen. As a song about refugee crises was performed to real footage of refugees, Mer provided food for thought and music to soothe the pain in the same moment.

Israel’s Agat powered her way through a show that reconfigured hip hop, with the power of rock and a young, female perspective. Fiery, intense Agat, backed by a live drummer. landed punch after sonic punch, leaving the crowd fatigued by the power of it all.

Following an encounter with glitch-accordian (yes, really!) at the festival’s last iteration, 2022 offered rouge-ah (or Urška Preis to her mum) to batter every expectation of what a harp should sound like. Surrounded by pedals and a laptop, a single harp crafted synth bass hits akin to John Carpenter soundtracks, glitches of the most mind-altering IDM and the soaring lushness of neo-classical composers. Yes, all that. It was simply mind-blowing stuff.

Techno has a way of becoming predictable, but Slovenia’s Shekuza, suffered no such fate with a set that added soul and inventiveness to the techno template. His modular experiments took driving bass and infused the dancefloor with captivating melody.

Despite all the experimentation on show, “pop” was not ignored, but of course, the pop on show presented the intelligent end of the spectrum. Staples of the Czechoslvakian indie scene, Tolstoys put in a consummate and slightly flamboyant performance, with singer Ela commanding the stage effortlessly with her subtle but soulful vocals. Whilst not pushing the boundaries of some other acts on the bill, their polished take on dream-pop is an enjoyable example of the universal and connecting power of pop music, rather than challenging and dividing, there is a unity to be enjoyed in a crowd simply enjoying fun music.

Pop music is cyclical, and Sharpe showed that there is a renewed love for noughties jazzy and RnB pop, a style previously big in the UK and US, and now forging some interesting talents to the East, Freekind (who are essentially an entire soul band in two musicians) peddled tunes of love and hope, with chilled, jazzy vibes. Lush vocal harmonies intertwined, and even the rapping worked. If this as coming from London or LA, it would be selling huge amounts.

Tamara Kramar again had echoes of classic jazz and summery singer-songwriters, which might be nothing new in the post-Amy Winehouse pop universe but that doesn’t matter when the music is nice. “It’s important to be nice, being nice is nice,” as journalist Richard Foster quite rightly said during the conferences listening panel. Never a truer word spoken.

Sharpe also wasn’t short of more traditional rock, albeit with a twist. Belgrade’s Šajzerbiterlemon exploded in a relentless but playful wall of distorted riffs, taking all the most abrasive elements of noise rock, indie rock and post punk and forging them into a compulsive post-grunge sound. The trio prove that sometimes the best rock doesn’t need to be clever, it needs to be hard, loud, fast and fun. They delivered all this.

Shallov proved more complex but no less compelling, their post-hardcore verging into prog-territory as they explored the gaps between numerous styles. How a three-piece can create such an intense sound is a conundrum? Their Mars Volta plays hardcore vibe proved to be a fatiguing experience, in a good way. Czech lot Sýček played the same vein of complexity, this time sinking into the motorik rhythms and swirling guitars of krautrock and psych for a cerebral experience.

More was seen, and not fully taken in, such was the wealth of talent on show. Sharpe proved that the future of music is inventive and bright, and that music culture can offer us some optimism about the future, even in dark times. Sharpe was everything it needed to be.