I’d like to welcome John Lord Fonda to the ROX-TV website. Before we get into the interview, I like to give artists a chance to let the readers know where they are from. Can you tell us a little bit about Nancy, France? Perhaps what the music scene is like there?

Hello I am John Lord Fonda and I am from Nancy. It is a city in eastern France located between Paris and Strasbourg. Like many so-called “provincial” towns, the electronic scene is not too developed there compared to the 90s/2000s, even if there are a few activists, clubs, parties, musicians and DJs. There’s also a metal scene, but I don’t know much about it. Let’s be honest: I don’t go out that much anymore, and since I’m only involved in music production now, I’m less aware of what’s going on in my city, I admit! 🙂 To clarify, I was not born in Nancy, but in Dijon, a city located 200 km south of Nancy.

You’ve been described as an “outsider” in the French Electronic Music scene and also hard to categorize. Could you tell the readers if you agree with this characterizing and why?

It is quite difficult to express myself on this point but I will attempt an answer!

Regarding my work, I have changed my style a lot because I really like to compose with different techniques and approaches, I have never settled on a very precise style, because quite simply it annoys me. And my last album goes in this direction. There’re pop songs, melodic techno, ambient/electronica. Few artists make this kind of albums, and it’s a shame. So, I do it and I claim it.

Also, regarding the other part of your question, it’s part of my career, which was built in dots. I’ve always worked without worrying about trends, I’ve always done music without worrying too much about current genre codes, with the consequences that it can have, and it doesn’t really matter.

You burst on the scene with your 2004 EP release of “Voltage”. I really dig “George” and also “So far away”.Can you talk about this time in your life, perhaps the inspiration behind the release?

I remember it very well. I was coming out of a period of total musical inactivity and I wanted to come back, but with a less harsh sound than at the end of the 90s. So, I offered to Citizen Records, Vitalic’s label, 5/6 electro- tek tracks, and 4 came out in the form of EP including the 2 mentioned. So Far Away was about loneliness, and George was more political, with a bit of a humorous twist. The sound was rather dark, like my state of mind at that time. It was exciting because my project was new, the Citizen label was a young label in full swing. I wanted to have a more dynamic life, because I was a little bored at the time, so I got what I wanted.

The songs have a very unique atmosphere with driving beats, with moments of intense feelings. I’m captivated by the sounds. How was this EP received in the electronic community in France and beyond?

Even if the sound of the EP was terrible, which limited its broadcast in parties, the reception from the press and the musical community was excellent, and the DJs loved it! My name was on everyone’s lips, a lot was expected from me at this time! I started touring with this EP, with a total hardware live (synths & MPC) and it was a real challenge!

I’m always interested in what gets people motivated to enter the world of music. Can you tell the readers when music became important to you and perhaps what artists or songs inspired you to get involved with making your own music? 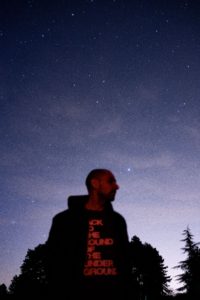 I’ve always listened to music, as far (back) as I can remember. Many artists have influenced me. It goes from classical (Bach, Debussy, Glass…) to rock (Pixies, Metallica…) and of course electronic music (Jarre, Vangelis, Depeche Mode…). Regarding techno music, I was done with my studies at the Dijon conservatory in the mid-90s and there was a club where techno parties were organized, “l’An-Fer”. It was fresh, exciting, and way more fun than Beethoven’s scores. In short, I fell into it and I discovered a whole musical universe that reminded me of the electronic sounds I was listening to during my childhood. That’s when I wanted to produce techno. One piece really impressed me at that time: The Meltdown by Lunatic Asylum.

In 2005 you released “DeBasEr” on Citizen Records. There were a few songs incorporated from the EP release, with more installments as well. I really like the track “Personal Jesus” which was great retooling of the Depeche Mode classic. “Erase my anger” is another great track from the release. Can you talk about the recording process for this album and what life was like for you during this time?

This album project has been created on the corner of the table with the artistic director of the label. We imagined a tracklist with songs to finish. I wasn’t doing very well at that time, but I put all my worries in the back of my mind to focus on this project. I remember working in a bit of a hurry, having rework some pieces. Also, one of the challenges of this album was how to articulate my version of Personal Jesus, which in fact was between a cover and a remix. The starting point of this track was a fairly minimalistic version of my live on the “VoltAge EP” tour, which I embellished with rhythms and more elaborate sounds.

In 2011 you released your second release on Citizen Records, “Supersonique” on the label founded by Dijon artist Vitalic. How did you get involved with Citizen Records and Vitalic in the first place?

I have known Vitalic since the mid-90s, we met at l’An-Fer, the club I was talking about before. In fact, he told me that if one day he started a label, he would like me to be on it. So, a few times after he had set up his label, I sent him some demo tracks and things started up again, just like that!

Some of descriptions used to describe your sound have been “dreamlike”, “melodic”, “epic” and “powerful”. I feel like these descriptions are not only warranted but well earned. What does it feel like to have your music described in such terms?

It’s obviously very gratifying and it makes me happy. I’d rather read that than negative stuff. We can explain this by the fact that my music is very written, and tells stories, the music must vibrate with emotions. There is a narrative side that I can’t explain to myself, I do it without thinking about it too much. I also know how to do straight techno, but I think something is missing in this way of producing, I can’t say what, even if it’s music that I like as long as it’s done well!

There is a large swath of time between the release of “Supersonique” in 2011 and the 2021 release of “Walk Again”. Can you tell the readers what you were doing during this break from major releases? What inspired you to put out new material when you did?

After 2011, I worked on different EPs and remixes until 2014, when I stopped releasing my music, and also stopped touring. On the other hand, I never stopped working in the studio during this period, I did 1 or 2 fairly discreet dates to take the pulse of the parties. I continued to work on different projects, for different EPs released in 2019, then worked on my 3rd album in parallel from 2015. The gestation was difficult but always in constant progress. I collected about twenty tracks of which a small half would become “Walk Again”. I upgraded my production techniques, in order to bring freshness to my tracks. I listened a lot the productions of English musicians like Jon Hopkins, Daniel Avery, Boards of Canada, Rival Consoles, Max Cooper etc… the careful production of these musicians is a must and an example to follow, they are musicians who pull you upwards, they redefine the standards of electronic production.

The “Walk Again” tracks are very interesting and well composed. “A Descent Melody” has such an etheral feel to it, like flying through the clouds. Tracks like “Antartica” invokes lovely feelings of sweet loneliness. The album would be perfect for driving into the city during a light rain at midnight. The music really intrigues me and always leaves me wanting more. How was the recording process after being gone away for a bit? Did if feel good to be making new material again?

In fact, I haven’t really stopped even if from an outside look, it seems like it.

The creative process was done naturally, without pressure and, I and the artistic director thought that it would come out when it was ready. I usually work on several tracks at the same time, without precise rules, and at a moment I finalize this or that piece, then I move on, etc… It’s always exciting to make new songs but you also have to keep in mind not to repeat yourself, and it’s not always easy!

For the readers who are just getting turned onto your music, what is one song or album that you would consider “essential” when delving into the JLF body of work? Why?

That’s a tough question!! I think “Orchidee” on Supersonique (2nd LP) and my Personal Jesus cover are good ways to get to know my music and how I compose. Also, my third album seems to me to be the most achieved musically so I think it could be a good start too.

Can you talk a little bit about playing live as a solo act? Do you feel that your music is best represented live or in album form?

Live sets will always partially represent my music because I only play live dancefloor songs, the focus is on energy and less on emotion. Same thing for my EP’s, they are more dancefloor oriented. I would say that to fully understand my compositions, it is rather necessary to listen to my albums, on which I express myself more widely.

Where can the fans find your music for purchase or for listening?

On all streaming platforms, the essentials are there. You can also find my latest vinyl album on the Citizen Records website as well as on the main online record sales sites. On the other hand, I don’t know if the physical version was distributed in a specialized store. There must be a few copies of the first 2 albums on CD but I’m not sure!

What does the future hold for you?

We thank you for your time today and really appreciate the interview. Do you have a message or any parting words for the readers and fans? Any shout outs tonight?

Just don’t doubt yourself, even when it’s not easy, set goals and stick to them as much as possible!