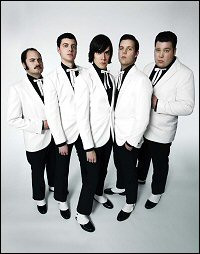 “Do what I please, gonna spread the disease because I wanna” – The Hives – Hate To Say I Told You So

The Hives really were proof that sometimes supernatural self-confidence can do wonders in turning what could have been yet another average early noughties garage band into one of the most genuinely exciting groups of that era. They first came to my attention when they signed to Poptones records (who also had SFTJ alumni the Cosmic Rough Riders, Sing-Sing and Beachbuggy on their books around this time) who put out the Your New Favourite Band album, a compilation of the best bits from the group’s two previous Sweden-only albums Barely Legal and Veni Vidi Vicious.

The thing about the Hives is, and I suspect some of their fans wouldn’t welcome the comparison but, their formula was very similar to the whole Andrew WK one – not a huge amount of variety but they attacked those songs with such vicious pinpoint precision that you’d hardly have time to get your breath back before the next assault started and it proved to pretty much be their main selling point as Hate To Say I Told You So and Main Offender both crashed into the Top 20 (even though they were both essentially the same song with slightly different words). And let there be no doubt, for a while it most definitely worked – those early songs were fine slices of energetic wiry garage punk which took the Strokes’ watered down garage rock formula and injected a dose of pure rock ‘n’ roll lightning into it to create something which, briefly at least, was pretty damn special.

It made for some pretty awesome live gigs as well – I saw the band a good few times through 2002 and 2003 and they had an energy about them that few could match with the band tight as you like and frontman Howlin’ Pelle Almqvist having that combination of energy and charisma that was all too rare among his contemporaries at the time. I still remember seeing the band play a packed Leeds Met and him introducing a song with the words “So this is our new single. You’re welcome to go out and buy it…I mean it won’t make much difference to us as we’re megastars now but it might improve your lives just a little bit.” I mean, you’ve gotta love that sort of cockiness ain’t ya?

I honestly thought at the time that the Hives would be a top selling band for years to come but unfortunately things seemed to tail off for them surprisingly quickly for them commercially after that brief spell as music press darlings – the follow-up album (and their debut for major label Interscope) Tyrannosaurus Hives crashed all the way into the Top 10 and gave them their highest charting single in the UK with Walk Idiot Walk but it would prove to be their last Top 40 hit and after that, things just seemed to fade away for ’em. I think the main problem might have been that they never really evolved their sound very much and it kind of left them stuck in an early noughties time warp as other newer bands started to motor past them and elbow them out of the press and public attention spotlight. Their relationship with Interscope would be a brief one with the group moving to A&M for their next effort The Black And White Album which still had a bit of fire to it but you could kind of see the writing on the wall as it was released into the teeth of the garage rock backlash and only sold a fraction of what Tyrannosaurus Hives did with the singles from it missing the Top 40. The world, sadly, had moved on.

Personally I’ve continued to roll with the Hives ever since although pickings have become a lot slimmer in recent years – it took them until 2013 to follow up The Black And White Album with Lex Hives which was a competent effort if not exactly full of surprises and made very little headway in the charts. They’re still out there today although apart from the odd single here and there (including a Christmas duet with Cyndi Lauper!), they’ve gone fairly quiet in recent years with their last single being back in 2018 and no new albums for almost a decade now.

Personally I hope we get a new album (and who knows, maybe even some UK tour dates) from the Hives soon – it feels like way too long since we last heard from ’em. I guess even though it was arguably their inability to evolve beyond that dynamite early sound of theirs that did for ’em commercially, they really are living proof that some formulas are better off left alone if they produce explosive garage punk rock ‘n’ roll like this and for a couple of years at least, along with the likes of Danko Jones, the Hellacopters and the D4, they really were a much welcome high-energy counterpoint to the more dull and formulaic take on garage rock espoused by the Strokes et al.