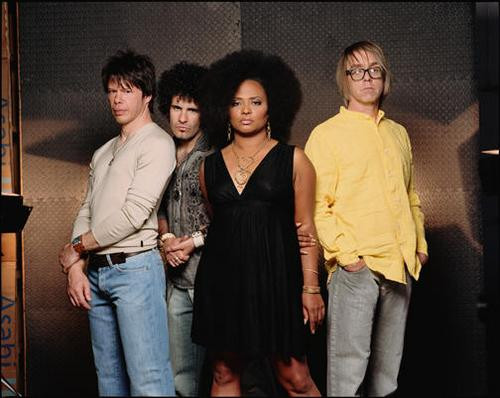 For about five minutes in 2002, Poptones genuinely did feel like about the coolest label around. We’ve already discussed how they came to briefly capture the lightning in a bottle that was the Hives and some of their other early triumphs like Beachbuggy, Sing-Sing and the Cosmic Rough Riders. For my money though it was the Bellrays, another import from the minors abroad, who were the jewel in the label’s crown in those days.

The group hailed from California and had been formed in the mid-’80s as the Rose Thorns by singer Lisa Kekaula and guitarist Bob Vennum. By the time Poptones signed them, the group had already put out five albums (including one as the Rose Thorns) and Alan McGee’s label put out a compilation of the best bits from the then-most-recent two of them called Meet The Bellrays. For a bit they were deserved press darlings as they had a very unique take on garage rock, not least due to Lisa’s powerful vocals which definitely helped them stand out from a lot of the identikit Strokes clones who were making up the garage rock scene by 2002. One review described them as sounding like ’70s era Tina Turner fronting the MC5 – high praise indeed and honestly, it’s a pretty accurate summation of their sound. The group’s first Poptones single Fire On The Moon got singles of the week in both NME and Kerrang! I seem to remember and the follow-up They Glued Your Head On Upside Down even breached the Top 75.

Unfortunately for some reason, it just never really kicked on for the Bellrays from there and I still don’t quite know why – they were streets ahead of a lot of the groups who were breaking on to the scene at this point and had an awesome energy in the live arena – I saw them live a good few times in 2002-03 when they were trying to break the UK market under McGee’s stewardship and they were flippin’ fantastic every time with the set veering from the punk fury of Fire On The Moon and the anti-racism vitriol of Changing Colours to the more subtle likes of Blues For Godzilla and Blue Cirque. I remember taking a group of my friends from Leeds to see them when they played the Rocket and one of the guys commented upon us leaving that someone should pair them up with our other favourites at the time Danko Jones for a tour. Sadly it never came to pass but hey, y’know, there’s still time…

The group would follow up Meet The Bellrays quickly with 2003’s The Red, The White And The Black but it slipped out to very little fanfare as the garage rock boom of a couple of years before had pretty much died away by this point and they’d part ways with Poptones soon afterwards. I think maybe there’s the rub as to why the Bellrays never really built on that early burst of attention the way that lesser lights like the Yeah Yeah Yeahs and the Von Bondies did – they possibly broke through over here about six months too late with the garage rock wave already starting to peter out a bit by the time they released Fire On The Moon.

They never went away though – the group remain active to this day and still have a small but loyal following over here in the UK allowing them to come back and tour every so often. I caught them at the Brooklyn Bowl (another London venue that’s now no more) in Greenwich during my days living in the capital and they still packed every bit as much of a furious punch as they’d done over a decade before even turning in an excellent cover of Cheap Trick’s Dream Police – risky territory but they absolutely aced it. More recently, Lisa and Bob have been keeping their fans’ spirits up during the lockdown by doing some online gigs which certainly helped to cheer me up during those dark days.

I was a bit surprised when putting this article together to realise that it’s actually over a decade now since the Bellrays’ most recent album Black Lightning – for some reason I was sure they’d released one about 4-5 years ago but apparently not. Hopefully though this means that now the world’s opening up a bit again, we’ll be seeing a comeback from them in the reviews column some day soon. Fingers crossed. In the meantime, if you’re not familiar with them already, you definitely owe it to yourself to give this very unique and arse-kicking band a bit of exploration – all their stuff from Meet The Bellrays onwards is well worth your time and attention.