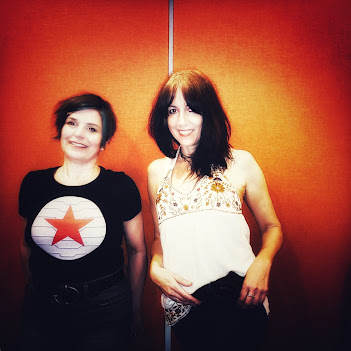 a combination that’s both accessible and impossibly cool. Hearing Clark and Peltz harmonize over the garage-rock strut of opener ‘Raven,’ or the sweet pop-rock hooks of ‘Jaguar,’ you can see why Kim Deal of The Breeders counts herself as a fan.” — The Onion AV Club

“A lively union of post-grunge guitar psychedelia and Stonesy chug, as if the nation’s Nineties soundtrack evolved out of seminal garage rock comp Nuggets instead of the Velvet Underground.” — Austin Chronicle

The Living Pins are guitarists/vocalists Pam Peltz and Carrie Clark, joined by a rotating cast of players.

Carrie is an inductee into the Austin Music Hall of Fame as the frontwoman for Sixteen Deluxe (Trance Syndicate, Warner Bros. Records). Pam is a published photographer and the producer of two Daniel Johnston songs, “Ain’t No Woman Gonna Make a George Jones Outta Me” and “Casper” on Daniel’s Continued Story album.

The Living Pins originally formed in 1996 during the heyday of iconic Austin clubs such as Liberty Lunch, Electric Lounge, and The Hole In The Wall. Pam and Carrie met as co-workers at Wheatsville Food Co-op and continued in the tradition of employee bands including the likes of Ed Hall, Cherubs, Sixteen Deluxe, Pong, Palaxy Tracks, and Cotton Mather. The original Living Pins line-up included Kathy Ziegler (Morningwood) and Leslie Petit (Bunny Stockhausen) and this incarnation of the Pins appeared on the 1998 Wheatsville band compilation The Wheat Album, with their cover of the T. Rex song, “Spaceball Ricochet”, produced by John Croslin (Spoon, Guided by Voices).

The new single was recorded at The Bubble Studios in Austin, TX. Bubble Master Chris “Frenchie” Smith is Sixteen Deluxe-bandmate-forever with Carrie and it was a natural next step to enlist his skills. As The Living Pins were aiming to embody something like the dreamy crispness of 1970s FM radio, there is definitely the overlap that Pam and Carrie and Frenchie understand. It’s the aesthetic of being a little kid with a portable Realistic cassette recorder. You could sit next to the radio and then hit record and get your favorite ELO song or Badfinger song and just feel the vibe.

The ROCK factor of the Bubble recordings is enhanced by Carrie and Pam’s most excellent company, the impeccable rhythm section of Claire Hamilton on bass and Rich Malley on drums. They are just two Austin legends. Austin has so many legends. Claire and Rich are two of them.

Much was made of the fact that the FLMC was their first release in 25 years. So, Carrie and Pam figured, “Let’s have another release within a year. Keep the momentum going this time.” So, in the spirit of momentum and all that is fun, The Living Pins present two new singles, “Chateau” and “Oh Yeah’, to rock you on through the Summer of 2022. 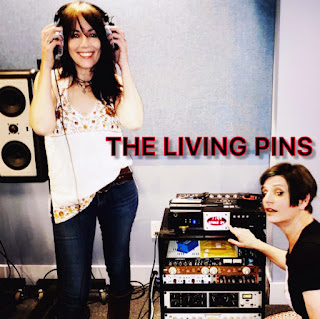 New Pornographers’ Carl Newman: “I just want to work. I don’t think of myself as some artist”