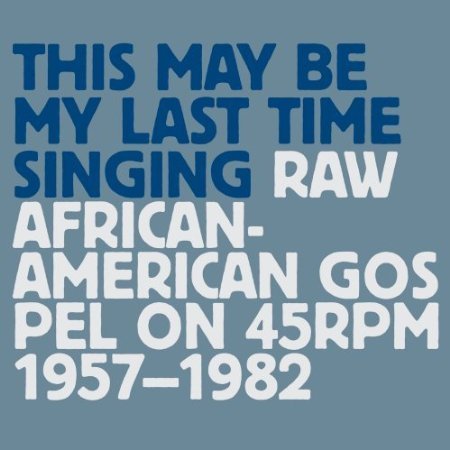 “Get ready for fiery sanctified soul, heavy Pentecostal jams, drum machine gospel, slow-burning moaners, glorified guitar sermons and righteously ragged a cappela hymns! The music on this compilation was originally released on small label 45s, mostly in the 1960s and ’70s. At least one-third of the records were self-released, paid for by a church congregation or the artists themselves. Others were on regional labels (typically run by one single producer) little known today outside of a small circle of collectors. This vibrant music is incredibly honest and almost criminally unknown.

“All tracks were sourced from 45s collected over the last decade by compiler Mike McGonigal, who also produced 2009’s three disc set Fire in My Bones: Raw + Rare + Otherworldly African-American Gospel (1944-2007) for Tompkins Square. McGonigal, who has compiled records for Mississippi Records and his own Social Music label, lives in Portland, OR where he is the editorial director for Yeti Publications.”

Sermons, gospel quartets, gospel choirs and full bands are represented on the 72 obscure tracks. Many of these songs were recorded live during church services. Peter Doyle’s liner notes reflect on this impressive collection:

Maybe you’ll feel like I did on first hearing these tracks, that you’ve stumbled in on someone else’s tenderly private moment. Or that you’ve been swept up in a collective delirium. You’ll hear deep soulfulness here with heavy admixtures of rhythm and blues and rock n roll. There are echoes of 60s and 70s pop too. You’ll also catch bits of country and western, and something like surf guitar. In another way, much here uncannily resembles the unruly sound and spirit of 1960s garage (music). This isn’t corporate music, it’s the other kind…

Every song on this collection deserves a story. Disc One’s highlights include Texas singer Sam Williams & The Harris Singers rendering “He Will Fix It”. The Albany, Georgia, label Soul-Po-Tion released “Jesus Been Good” by The Fantastic Angels that features a nice guitar hook and smooth vocals. “The Devil’s Trying To Steal My Joy” is pure blues by Prophet Lusk from northern Arkansas. The Carolina Kings sing a sanctified version of “I Heard of A City”.

Missionary Minnie Sample’s blues-based version of the “title track” proves to be a memorable tune where soulful desperation exists. “Don’t Let Nobody Turn You Around” was recorded in Atlanta around 1980 by Reverend J.W. Neely And Family. Neely is still an active pastor in Atlanta. The organ-laced “Oh Lord I Have No Friends” was recorded in Meridian, Mississippi, by the Exciting Traveling Four. The Southern Jubilees play a guitar-organ driven “Prodigal Son” that really evokes spiritual joy.

“Make Old Satan Leave Me Alone” was recorded in a basement by the Sensational Whirlwinds that was released by the Rochester, New York, label Lifetime around 1962. The mother-daughter duet of “One Morning Soon” by Joyce and Johnita Collins sounds hypnotic. This writer’s favorites on Disc Two include The Echos of Harmony singing about the assassinations of Medgar Evars, Reverend Dr. Martin Luther King Jr, and Robert F. Kennedy on “Ain’t It A Shame”.

“He Got His Eyes On You” features Brother Sidney Harris rocking along in 1963 in Virginia. A Memphis group, The Masonic Travelers, sound beyond intense on “If You Ever Need A Friend”. “I Believe I’ll Go Home” showcases Big Dan and the Gospel Heavyweights from Nashville–what a rocking band! Elder Curtis Watson delivers a feverish sermon called “Be There In The Happening (Part Two) in Louisiana. “I Found A Friend” ranks as one of this collection’s finest tracks by the Mighty Gospel Singers that retains a Jamaican swing. “This Old Light of Mine” by the Gospel Six of Gadsen, SC, deserves mention. Ethel Profit’s “I Got To Make It” is straight up gut-bucket blues with a spiritual message.

“Jesus On the Mainline” by The Whirlwinds provides a wave of sound that begins Disc Three. The Sensational Six of Memphis sing a moving version of  “The Lord Will Make The Way”. Calvin Leavy & The Cummins Prison Farm Singers’ version of “He Walks With Me” sounds timeless. Leavy died in prison during 2010. “Milky White Way” features the Zion Travelers, an L.A.-based Golden Age quartet. Sylvia Phillips recorded “I Got Jesus” in Miami for a revival crusade. “Jesus Is Living Today” serves as the final track on this amazing compilation. This May Be My Last Time Singing: Raw African Gospel On 45RPM 1957-1982 emerges as a musical treasure trove.

Insured Beyond The Grave

Insured Beyond The Grave Vol. 2

August 18, 2022
CBDCs only solution to ‘smooth continuation’ of the monetary system: ECB