As digital currencies gain momentum, crypto-related technology, products, and perceptions continually evolve, and capture the attention of the public, all over the world.

Digital currencies and crypto are part of the popular consciousness, as they are poised for additional growth, especially in Emerging Markets according to Visa’s ‘The Crypto Phenomenon Report’, with wide-reaching implications for payments, finance, and commerce. No wonder that at the end of May 2022, central bankers, technology providers, developers, crypto and blockchain enthusiasts, as well as investors in digital assets came to Bucharest, Romania to analyse the future of finance in the new era of digital money during Banking 4.0 Crypto edition.

The event had plenty of ‘goodies’ for us to take home: insightful panel discussions on CBDCs, DeFi, NFTs, crypto (as a payment method and an investment tool), presentations of real uses cases of blockchain technology, keynote speakers from global tech providers like Ripple and Worldline; plus local successful players such as Elron Network and Imperium. Besides the panel discussions, there was also a NOCASH GALA, that awarded excellence in the financial services and electronic payments industry in Romania, apart from a Blockchain competition that rewarded local projects developed on blockchain technology.

The event kicked off with the Ripple team presenting successful blockchain use cases and implementation in payments, for instance a collaboration with Bhutan’s central bank to pilot a central bank digital currency (CBDC) aiming to increase financial inclusion and provide an alternative and sustainable digital payment instrument in Bhutan. Also, a partnership with the Pacific island nation of Palau to provide technical, business, design and policy support for Palau’s national stablecoin, as well as a partnership with Lithuania’s central bank to issue LBCoin tokens – a commemorative digital token exchangeable for physical legal tender. In addition, it featured enabling inclusion and digital onboarding support at TymeKiosks in South Africa (TymeKiosk enables bank customers to open a KYCed bank account in minutes, according to their website. The process is fully automated with little to no documentation required.)

Antony Welfare from Ripple advised the audience that before jumping on the CBDC bandwagon to first ask ourselves how the citizens and businesses will adopt your CBDC and why. In this way, we can learn from the crypto and blockchain pilots and implement the best solutions on a CBDC ledger, as use cases drive real adoption and benefits. Furthermore, he suggested that we should be open to the unknown and adopt a learning culture to support innovation – ‘start something and learn from this, to understand the steps to the final solution’. As ‘blockchain is a team sport’, involve other parties in the journey of developing CBDCs or stablecoins from the start (e.g., central banks, commercial banks, payment providers, merchants, consumers, regulators, etc.). But most importantly, educating all parties across the country is key, as ‘education underpins the whole process, and is a continually evolving area’.

From global examples, the discussion went to local developments, and Jean Bucur from the National Bank of Romania shared some insights about what the central bank is currently doing in terms of developing a CBDC. In September 2021, a small team of 7 people from BNR started working on a CBDC pilot developed in a closed testing environment, to gain a better understanding of the concepts related to technical, security, and legal issues, as well as the policy implications regarding the potential issuance of the Digital RON. Challenges around this topic are mostly concerning educating the Romanians about concepts such as CBDC, digital payments, digital transactions, etc. Once these are overcome, and if the digital RON becomes a reality, local businesses and citizens can benefit (e.g., a digital RON can support financial inclusion since only 66% of the population has a bank account now).

Positioning Romania on the global blockchain and crypto map

Blockchain technology was adopted by the Romanian Government in December 2020 for the parliamentary elections to guarantee the integrity of the electoral process and to strengthen its transparency; plus, to ensure tamper-proof and real-time data on voters’ presence. At that time, Romania was considered to be the first EU country to use a voting reporting tool based on blockchain technology for national elections.

However, the Romanian population started adopting blockchain technology use cases much earlier when Romanians started buying Bitcoin and used it either for investments or payments.

Back in March 2018, more than half (57%) of Romanians in urban areas heard of cryptocurrencies, with 8% of Romanian internet users in urban areas buying cryptocurrencies in the last 12 months, according to a study conducted by iSense Solutions. When it comes to purchases, Bitcoin was the most popular digital currency. At that time, overall, Bitcoin was the most popular digital currency and 30% of respondents believed that virtual currencies represent the future of means of payment.

In September 2019, another ING international survey, called ‘From cash to crypto: the money revolution’ revealed that 12% of Romanians answered positively to the question about having crypto, a higher percentage than the respondents from France or Germany. At that point, according to the study, Romanians’ interest in crypto was the highest in Europe. 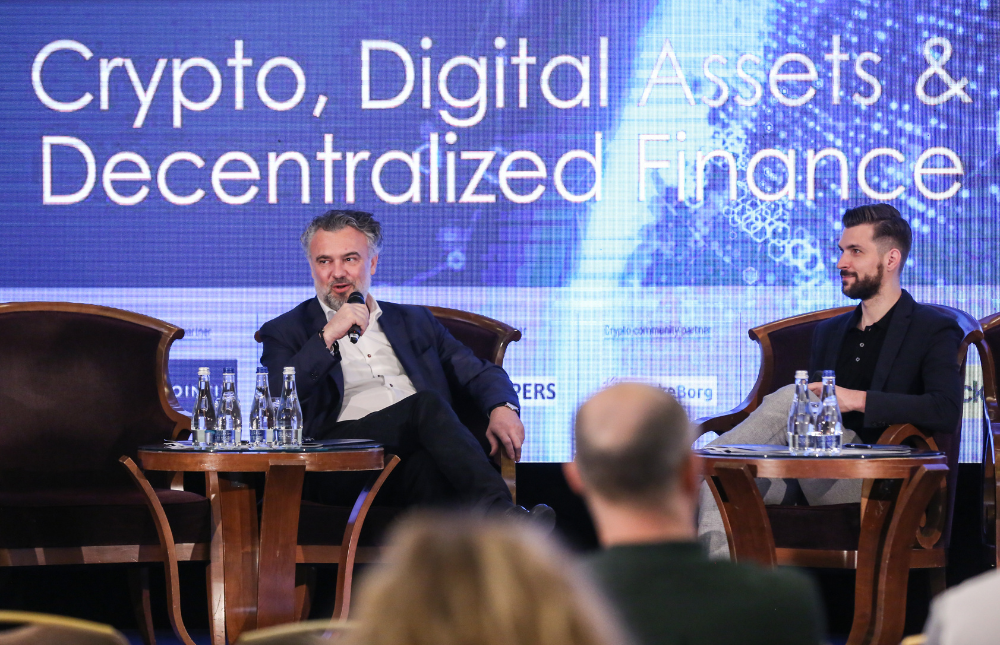 The Internet / online searches (47%) and social networks (23%) are the main sources of education about cryptocurrencies among those familiar with the term. At the same time, the main channels for obtaining advice in the event of an investment in cryptocurrencies are specialised websites (41%) and financial banking consultants (21%). Only 15% would directly access automated software or algorithms – especially people who own or have owned cryptocurrencies.

Despite 65% of cryptocurrency owners agreeing the crypto ecosystem represents the future of the means of payment, trust still plays an important role in conducting transactions; and 45% of internet users, aged between 18-55, want Romanian banks to offer crypto services. 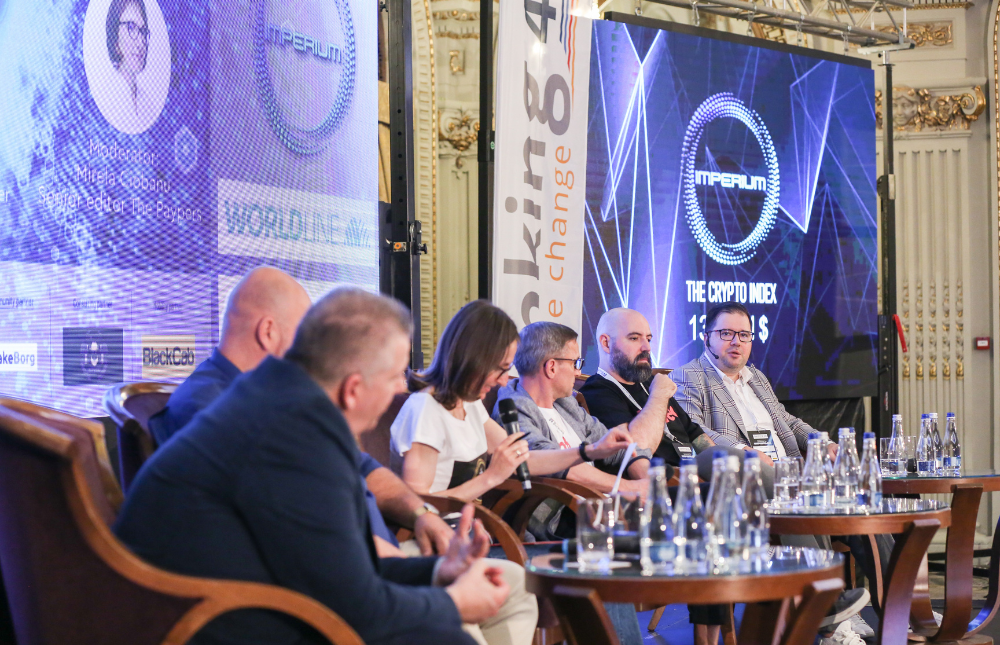 During a panel discussion, focused on local merchants adopting crypto as a payment method, Horia Grozea from Netopia Payments, an important Romanian PSP, confirmed the demographics revealed by the study. Romanian men are more likely to purchase things using crypto; they work for IT companies, have a higher income than the average population, and purchases revolve around games and gaming products, electronics, expensive cars (electric BMW), as well as properties. Since 2015, Netopia processed 17,000 Bitcoin (BTC) transactions, 126 with Ethereum (ETH), and 336 with Elrond eGold EGLD (launched last fall). Their platform encompasses approx. 100 active online merchants that accept cryptocurrencies and the highest value in BTC registered in 2019 was 300,000 euros for an apartment and on EGLD 150,000 euros for a BMW.

Overall, the data reveals a very important change in the financial mindset of internet users and a high interest in an alternative financial system.

Banking 4.0 Crypto culminated with the NOCASH GALA, an annual event with the longest tradition in the financial and payment services industry in Romania. Among winners of the gala that rewards innovation in payments, we found: CEC Bank for tapping into blockchain tech from Aurachain, Elrond for receiving an e-money license and card issuance from the local National Bank, Transfond for launching AliasPay, which enables sending money to other banks only with the phone number, PayU for launching BNPL as a payment method on local ecommerce platform eMAG, and many more.

Based on criteria such as innovation, scalability, originality, business model, web 3.0 impact, user friendly, team, advisers, community, and presentation, the blockchain competition winner finally announced was Farm XYZ, a startup that turns yield farming into structured assets that everyone can use.

To sum up, the digital payments ecosystem in Romania is on a growth trajectory, with many local and global competitive players entering the space (Elrond, PayU, Netopia, Revolut, Worldline, etc.) and traditional banks paying attention to emerging tech. And even if, currently, when it comes to digital currencies, Romanians are primarily interested in them mostly as an investment or store of value as opposed to a medium of exchange, this might soon change, as local merchants are starting to adopt crypto as a payment method at the POS.

Special thanks to No Cash for organising such a dynamic event and for inviting us. We look forward to visiting Bucharest again.

Mirela Ciobanu is a Senior Editor at The Paypers and has been actively involved in drafting industry reports, carrying out interviews, and writing about innovation in payments and fintech. She is passionate about finding the latest news on AI, crypto, blockchain, DeFi and she is an active advocate of the need to keep our online data/presence protected. Mirela has a bachelor’s degree in English language and holds a master’s degree in Marketing. She can be reached at mirelac@thepaypers.com or via LinkedIn.