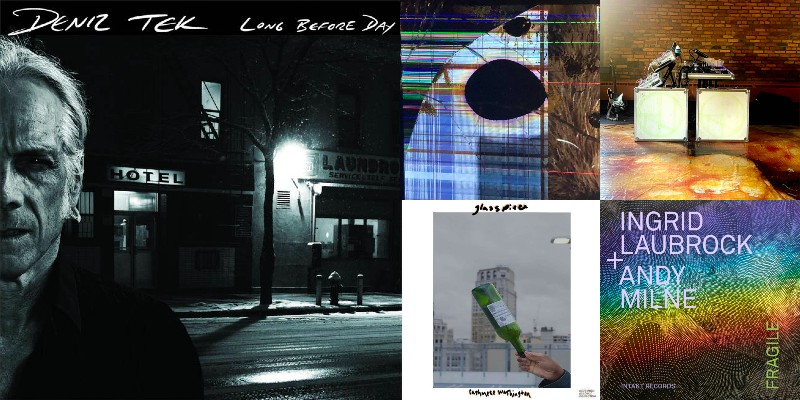 Deniz Tek, Long Before Day
Before he founded the proto-punk greats Radio Birdman in 1974 while living in Australia, Deniz Tek was just a kid from Ann Arbor soaking up the sounds of The Stooges, The Rationals, and MC5. The guitarist-singer’s latest solo album, Long Before Day is a 13-track collection of the sort of dirtied-up rootsy rock ‘n’ roll Tek’s been honing for 50 years (albeit a lot more mellow now).

Ingrid Laubrock & Andy Milne, Fragile
Pianist and U-Mich educator Andy Milne is the latest duets partner for the German-born, NYC-based saxophonist Ingrid Laubrock—who is a regular Ann Arbor visitor to play Kerrytown Concert House’s annual Edgefest. Fragile is the third volume in Laubrock’s duos series, and the music flits between chamber-like beauty and sparse free jazz. (Milne’s group Dapp Theory won a Juno—the Canadian Grammy—for best jazz album for its 2018 LP, The Seasons of Being. He won it again last year for his 2020 trio album, The reMission. In August 2020, Pulp talked to him about both of those records and his move to Ann Arbor.)

Child Sleep, Parallel Lives EP
This new Child Sleep EP reminds me of going to record stores in late ’80s and early ’90s to buy indie-rock import 12-inches that usually featured three or four songs and felt like complete releases, not a single with two throwaway B-sides.(If you’re also a geezer, I’m thinking of releases by Ride, Swervedriver, Lush, and about 20 more.) The music by this Ypsi duo of Mary Fraser and Elly Daftuar—who handle all the guitars, keys, voices, and drum programming—also recalls the U.K. indie scene of 30 years ago, playing a spacious brand of shoegaze-influenced pop. The duo’s last release was the terrific 2016 full-length Secondary Forest, and Parallel Lives is a most welcome return. (In the interim, Fraser has released music as Gray Scot and with the group Chip Clip.)

EnD, Live 30
All of the albums by experiment Ypsi duo EnD—Eddie Jackson and Damon Palyka—are improvised live performances. Live 30 documents a noisy set they performed at The Columbus Cultural Arts Center in Columbus, Ohio, on June 3, 2022.

Christopher Porter is a library technician and the editor of Pulp.