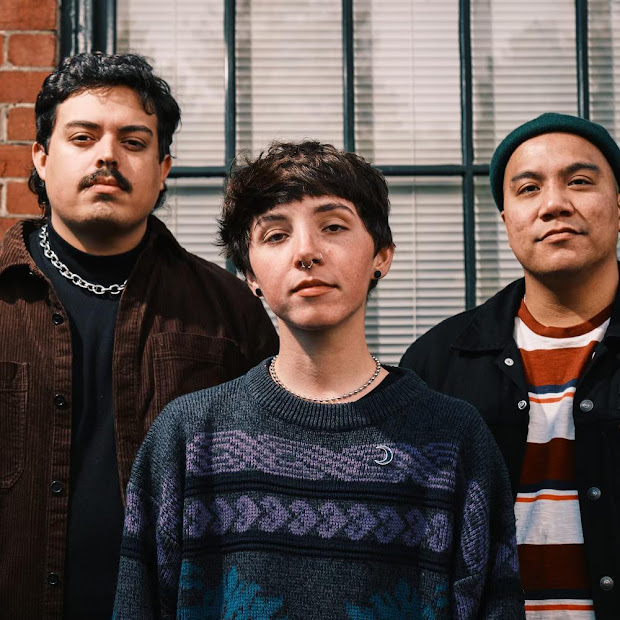 In November 2019, Oakland punk trio GRUMPSTER were fresh off the release of their debut full-length album, the Asian Man Records-released Underwhelmed, and set to embark on a victory lap tour in spring 2020 with Anti-Flag when … well, you know what happens next.

Back to the drawing board for the band – singer/bassist Donnie Walsh (he/him), drummer Noel Agtane (he/him) and guitarist Lalo Gonzalez Deetz (he/him) – who formed in 2016 after the three Guitar Center alums bonded over their love of the sweat-soaked 924 Gilman-forged punk sound that swept the underground in the ’80s and ’90s.

“We waited and waited to tour Underwhelmed, but things never stopped looking pretty bleak,” says Walsh. “We ended up doing a live stream with Anti-Flag during the pandemic where Chris #2 told us, ‘Write some new songs and let me produce them!’ We thought, ‘Oh, god, I guess we have to make a new record now.’”

“The Underwhelmed album cycle was basically over before it began,” Agtane adds. “We were so proud of that album, but being able to do another one so quickly felt like a built-in reset.”

This willingness to embrace the unknown with open arms – to blow up their plans and instead let fate take control – is what makes Grumpster’s Pure Noise Records debut, FEVER DREAM, so compelling, relatable, and ultimately inspiring.

Produced by Chris #2, just as he jokingly demanded, at District Recording in San Jose, FEVER DREAM filters the ghosts of the East Bay’s melodic punk history through Grumpster’s signature garage rock sound – which Alternative Press hailed as “a ’96 mixtape that has the Breeders, Huggy Bear and Imperial Teen on it.”

“Authenticity has always been really important to us,” Gonzalez Deetz says. “It’s that feeling you get in your chest when something feels real. We want to sound like a band in a garage, otherwise it’s not going to be believable.”

Ferocious power chords, buoyant choruses, and DIY energy filtered through modern sonics fill the album’s 10 songs, as the band explore the push and pull between dead-end relationships (“Looking Good,” the blistering, riff-heavy “Picture”) and more introspective moments (“Better Than Dead,” first single “Crash,” the acoustic-based “Vicious”) – and how the two intersect to create a cycle of anxiety and self-loathing, yes, but also ultimately resilience.