Artists at a glance

These Fresh Faves were picked by our readers over the weekend – and reviewed by Phil Meadley this week. You can hear all these tracks in a single Soundcloud playlist here.

CARAPACE – I Was You (Demo)

Scant online information tells me that Carapace is an electronic producer from South Wales and that Adam Walton has played him on his BBC Radio Wales Introducing show. Vibe-wise I Was You has a sort of global fusion electronica sound with a filtered tabla loop, deep sub-bass, and a Burial-style glitchy garage beat permeating proceedings. Personally I’d have liked the tune to have more variety, but what’s here is promising.

East London singer/songwriter and producer Chinwe is something a little bit different. Vocally this track has a strong Greentea Peng flavour to it, but what, for me, sets this apart from others doing that popular laid back soul style is that she’s also a harpist, and that adds a lovely, almost Bjork-esque feel to Something Beautiful. One for those lazy, hazy summer days.

EMMI MAARIA – I Am The Whisper Of Blood

This London-based Finnish singer, violinist and composer is probably the most musically intriguing pick of the Listening Post bunch this week. It starts off in quite a traditional Northern European folk manner, driven by some great viola playing, but then takes quite an unusual indie-pop twist when Emmi Maaria’s expertly layered vocals kick in. Then towards the end more backing vocals (presumably from guests although they could be her own, such is the wonder of modern technology) are added to the mix as it builds into an almost Sigur Rós style finale. Intrigued to hear more from this artist.

South Coast of England act Fable has been described as “the female Thom Yorke” by one publication. Indeed 6 Music’s very own Chris Hawkins championed her last single Shame, saying that he heard “Britney’s Toxic meets Garbage in a late night drinking den.” Great praise indeed. This track is a bit more laid back and has some nice reversed almost-submerged type sounds accompanying piano, bass and jazzy drums. She’s got a distinctive but low-key, vulnerable sounding voice. It’s also well produced and you sense some decent record label investment being put into Fable. As such I suspect that you will be hearing more from her in the not-too-distant future.

Luna Blue produce the type of indie rock/pop sound that fans of Two Door Cinema Club and possibly Glass Animals should like. They’re a 4-piece band from Brighton and have already graced the airwaves of BBC Radio Surrey, BBC Radio Sussex, and done a BBC Introducing Live Lounge session, so they’re definitely on an upward trajectory. And musically you can hear why. It’s very polished and has a strong commercial edge that should appeal to many. Possibly more pop than rock it treads a very well-worn path in terms of delivery and style, but these lads obviously know where they’re heading and the future looks bright.

Anglo-French singer/songwriter Michael Baker is actually working on his fourth album so he’s certainly no stranger to the music business, and in many ways you can hear this from the surety of his song-writing on Keep Hydrated. It’s a well-crafted indie pop number with great lyrics and a catchy chorus. That it drifts into alt-country territory towards the end is unexpected, but it somehow works. File under intelligent indie-pop.

Hailing from Bury in Greater Manchester, Signal Committee describe themselves as a four-piece alternative dance/indietronica band, citing the likes of New Order, Radiohead, Massive Attack, and even Bowie, as influences. This track has a slight goth electronica feel. The singer’s voice actually reminds me of Heaven 17 vocalist Glenn Gregory (not goth in the slightest), on this tune at least. Production-wise my only criticism would be that it sounds painfully bright in the top end, but maybe that was the sound they were going for. Aside from that it’s got a brooding electronica-meets-shoegaze rock feel that I like.

SILK CINEMA – Lean On Your World

Like the first review, information on Silk Cinema is a little hard to find on the net, aside from them calling themselves a “London-based duo”. This track, however, is pure laid back, funky soul. Further research led me to discover that Silk Cinema are vocalist/songwriter Kristy X and producer/instrumentalist Raph A. I’m not sure how long they’ve been going for, but this is pretty slick stuff and Lean On Your World is an understated but assured addition to this week’s Fresh Faves.

When you’ve been reviewing music a long time it tends to be the more original sounding tunes that stick in your mind. I would say that Animal Fat by three-piece alternative band The Green Brothers from Essex fits into that category. There’s something quite menacing about it, in a similar way to The Streets but not necessarily in a musical sense. It starts with a police siren, some sort of clav sounding synth and dislocated voices deep in the mix before the singer comes in with the line “wake me up when the riot’s starting, I’ll be on my feet, my doctor said I should focus more, and gave me amphetamines.” What an intro, eh? They say of this tune that “solutions aren’t easy to find these days but problems are, and this country is being run by the most entitled and arrogant people we can find.” Not many people could argue with that. The days of protest songs aren’t quite over yet.

Just when I was thinking that there was quite a laid back feel to most of the selections in this week’s Listening Post, along comes “feminist shouty punk band” The Strangerz to snap me right out of my chilled reverie. This alternative punk rock band from Doncaster (now based in Manchester) owe a lot to the likes of Bikini Kill, The Slits, and even more so Amyl and the Sniffers on this particular tune. They consist of twins Martha (the singer) and Tom (guitar) Kelly, Shannon Gebbie and Will Dalcott and have been gigging since 2019. Shut Up! is fast, brash, gnarly as hell and all the better for it. 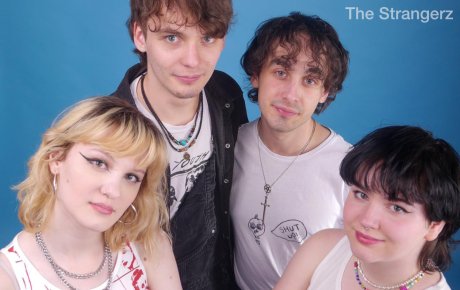 But if we’ve recently featured you in our Fresh Faves – or on my BBC Introducing Mixtape – please wait three months before sending us another track, so we have space to help other deserving artists… For more info see Robinson Has A Good Old Moan.