The Kinks – a ’60s powerhouse band that lasted well into the ’90s with best-selling albums and singles – were UK brilliance with their output. They’ve released 24 studio albums and can boast of a large selection of hit singles from those albums for easily 15 years running. Two of those studio wonders were Muswell Hillbillies, and Everybody’s In Show Biz. Both were issued via RCA Records and both inside the first ten years of the band’s existence. On September 9, both Muswell Hillbillies, and Everybody’s In Show Biz will be reissued with new 2022 remastering as standalone CD releases via BMG Records. The two sets will feature a small collection of bonus tracks. Both are being reissued in celebration of their 50 years of existence. A separate Deluxe Edition will be issued that will contain both titles on 6LPs, 4CDs, and a BD (with Ray Davies’ 1971 Home Movie), a 52-page hardbound book, 6 photo prints, a London Roots Map, and a button/pin. One of the CDs and a black vinyl LP will contain 11 new Ray Davies remixes. The original albums will be pressed on color 180g-weight vinyl LPs. The Deluxe Box is for the hard-core Kinks fan. A 2CD MediaBook will be released with both albums remastered. 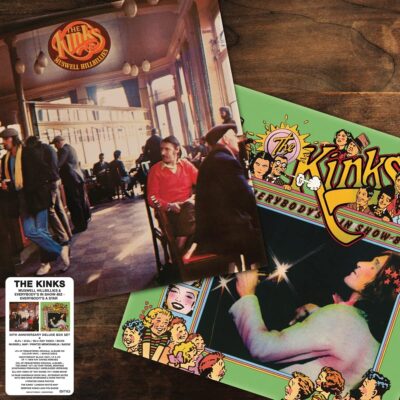 Both titles will be standalone issued on 2CD and LP sets as well.