What might a GenZ female have in common with a Millennial male? How about vinyl LPs?

During the first half of 2022, vinyl album sales – the only segment of recorded music for sale that continues to grow, according to Luminate’s Midyear Music Report – were driven by younger women, with 34% of female buyers in the Gen Z category, while 62% of male buyers of vinyl were Gen X-ers or Millennials (31% for each).

What’s driving those sales is not classic catalog titles, which might attract those older male consumers, but rather current releases, sales of which are up 27.4% year-over-year while catalog LP sales fell 8.4%. And who’s driving them is Harry Styles, currently the dominant act at CHR with two of the format’s top five songs based on Mediabase’s weekly spin count. Since Luminate began tracking music sales in 1991, Styles’ album “Harry’s House” has posted the largest vinyl sales in a single week with 182,000 units upon its release in May.

While it may be dwarfed by digital track sales, vinyl LPs accounted for more than half (53%) of sales of all physical albums in the U.S. from January to June of this year. Vinyl’s 19.4 million units, up 1.0% from the first half of 2021, again exceeds total sales for both CDs and digital albums. The uptrend has been fueled by acts such as Styles and rapper Tyler, the Creator, whose vinyl release in April pushed him back up to the top of the Billboard 200 album chart. It also explains why mass merchants such as Target and Walmart have doubled their share of vinyl album inventory since 2019, from 6% up to 12% through mid-2022, while their vinyl sales zoomed up 361% over that period. 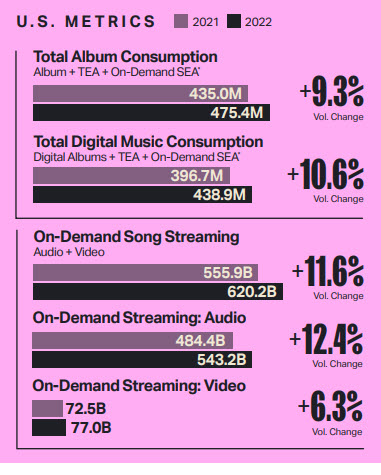 While even with vinyl’s growth, recorded music sales continued to decline during 2022’s first half, on-demand streaming saw double-digit increases, with audio and video streaming together up 11.6% year-over-year according to Luminate’s report. Taking into account both stream-equivalent album consumption and digital-track-equivalent album sales, the industry is up 9.3% in total album consumption and 10.6% for total digital music consumption.