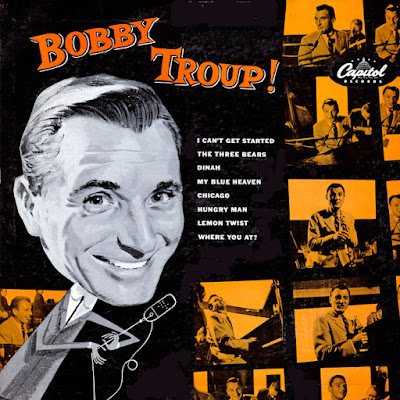 Two recent posts on my other blog were devoted to the earliest recordings by singer-composer-pianist Bobby Troup. (Thanks again to lafong for his contributions!) You can read about Troup’s early exploits on those posts.

By 1953, Capitol had scooped up Troup, and his first LP was soon on record store shelves. I transferred that 10-inch LP many years ago and offered it here. I’ve now remastered it, added the four songs added to the album’s 12-inch incarnation from 1955, and thrown in the three Capitol sides that were never issued on LP.

Here’s some of what I wrote about the singer way back when:

Troup first came to notice as a songwriter, with “Daddy” as early as 1941, followed by “Route 66,” a big hit for Nat Cole. Later compositions included “Girl Talk” and “The Girl Can’t Help It.” (Too bad Little Richard didn’t do a whole album of Troup, eh?)

This album has three of Troup’s own numbers – “The Three Bears” (offered here previously in two different Page Cavanaugh renditions), “Hungry Man” and “Lemon Twist.” The latter is set to a familiar bop riff that I can’t quite place.

Within the limits of his style, Troup was an enjoyable performer. He never had much of a voice, but what he had he used stylishly, although on these early sides the style can veer into mannerism. He sounds remarkably like Bob Dorough – who, I should add, did not begin recording until three years later.

The four songs added to the 12-inch LP included one by Troup – “You’re Looking at Me,” a particularly good one.

Capitol issued two Troup singles. First was “12 Five Days, Six Hours and Thirteen Minutes,” included on the 12-inch LP, backed with the orphaned “When You’re With Somebody Else,” which I’ve added to the download.

The second single was “Instead of You,” coupled with one of Troup’s best known compositions, “Julie Is Her Name.” Troup wrote the latter in honor of Julie London, the singer who was his protégé. When he moved to Bethlehem records and then Liberty he brought her along, producing her first hit, “Cry Me a River,” for the latter. Julie Is Her Name became the title of her first LP. Troup and London would marry in 1959.

This last Troup single for Capitol came from 1954. Nelson Riddle was the conductor. That was the extent of Bobby’s relationship with the label. He was soon to move to Bethlehem and Liberty. 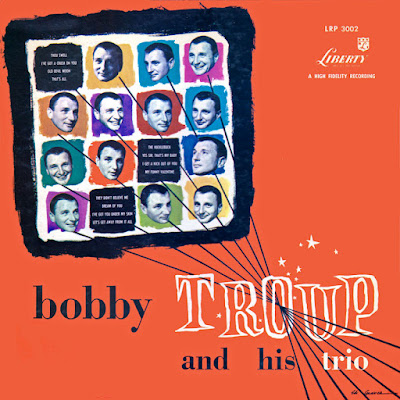 An excellent article on the Jazz Research site gives the background to Troup’s first Liberty album, which dates from 1955. At the time, his trio was playing at LA’s Celebrity Room. His manager recorded the trio after hours in an empty club, and the tapes eventually became Bobby’s first Liberty LP – just the second album issued on the label.

I transferred that LP is 2011 and have now remastered the results, almost entirely eliminating the surface noise that marred a few cuts.

Here is some of what I wrote 11 years ago:

Troup’s troupe here includes multi-instrumentalist Bob Enevoldsen (playing bass on this recording), guitarist Howard Roberts and drummer Don Heath. Bobby sticks to standards for the most part, although he does slip in “The Hucklebuck” for irony’s sake, with his piano solo quoting Charlie Parker’s “Now’s the Time,” upon which the 1949 dance sensation was based.

Otherwise, his hipster mannerisms are fairly well in check, with the highlights a rendition of the great Bob Haymes tune “That’s All” and a concluding tribute to his fellow singer-pianist-composer, Matt Dennis, with “Let’s Get Away from It All.” He also amusingly adds his own lyrics to Rodgers and Hart’s “Thou Swell.” No songs of his own, though!

But before the Liberty LP could be released, Bobby had to complete a commitment to Bethlehem records. For that label, he recorded a 10-inch LP, The Songs of Bobby Troup, which soon was expanded into the 12-inch Bobby Troup Sings Johnny Mercer. His final LP for Bethlehem was The Distinctive Style of Bobby Troup. I have all these albums and will transfer them in the future.

Links to both the Capitol and Liberty recordings are in the comments, as well as the comments sections of the original posts.