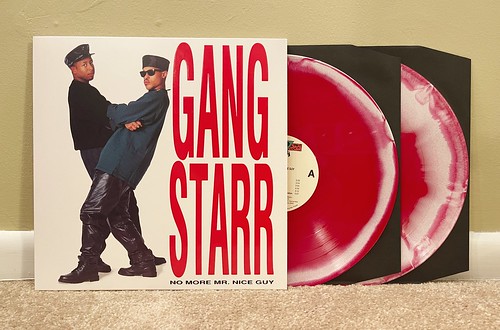 Every Wednesday, in honor of Ed Lover Dance Day from Yo! MTV Raps, I take a break from rock and roll to write a little bit about hip hop. In the late 80s and early 90s hip hop ruled my musical life. During this often called ‘Golden Era’ I discovered so much incredible music. As I am slowly replacing the CDs I’ve had for twenty-five plus years with vinyl copies, I’m going to talk about some albums that had a really important impact on me during some very formative years.

I’ve dipped my toe into the Vinyl Me Please subscription club every so often.  Usually as a one off to pick up a hip hop record they’re reissuing that’s difficult to get otherwise.  I think that their records are a little overpriced, but it’s hard to argue the care and detail they put into each one.  Aside from a slightly dodgy copy of the first Wu Tang Clan album, everything I’ve gotten from them has looked great and sounded even better.

The first Gang Starr album recently reissued on VMP is no exception.  It’s an excellent package with the main album sounding great and an entire additional LP filled with extras, mostly from singles from that Gang Starr era on Wild Pitch records.  While I could never say that No More Mr. Nice Guy is the best Gang Starr album considering the absolute classics they were about to unleash over the next couple of years, it’s still a strong record.  Especially when you put it next to other albums that were coming out in 1989, it’s still quite forward thinking – though maybe not as ahead of its time as say a Public Enemy or Ultramagnetic MCs.

The production isn’t what DJ Premier became known for.  It’s generally faster and more upbeat, with some of the breaks and sounds that you’d kind of expect to hear on a lot of hip hop records that came out before 1990.  There’s a definite sound in the late 80s that took a couple of years to blossom into the full flavored production more associated with the early 90s, but that’s not taking a shot at this Gang Starr record.  It’s just how things were at the time.

Guru is not quite as laid back as the style he’d eventually gain his notoriety for.  To keep up with the beats he’s going a little faster than the groove he’d settle into, but he still has the lyrics and the smooth vocals.  In some ways this album is like a time capsule, or maybe a blueprint for what Gang Starr would eventually become.  It’s in no way as good as the next few albums that followed, but it’s also still a very good album and if it was the only record they ever released, it would still be one I’d want in the collection.