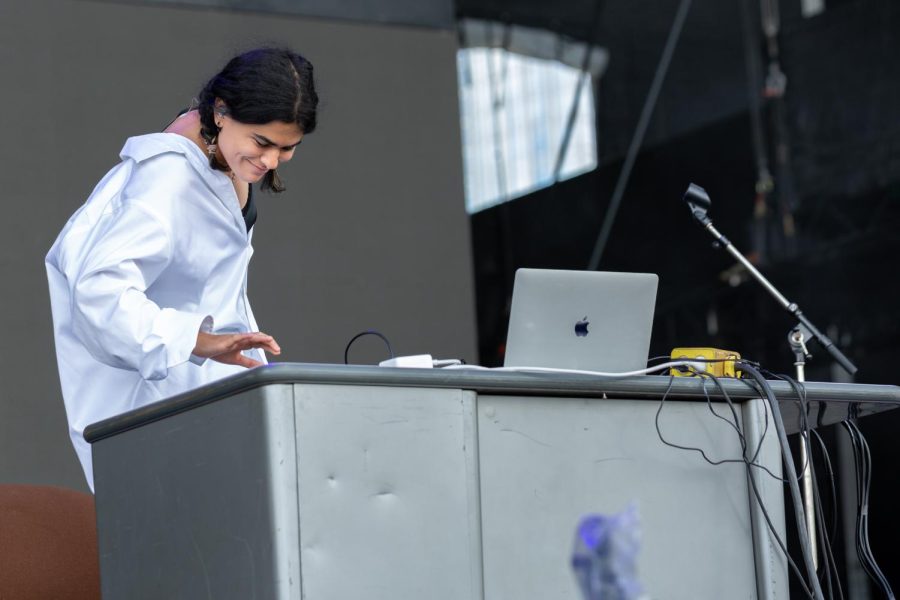 underscores performs her hyperpop set at the T-Mobile Stage during Lollapalooza.

It’s that time of the year again where nine stages are set up around Grant Park and Congress Plaza Drive gets shut down for Chicago’s iconic music festival, Lollapalooza, with people coming from all over to watch nearly 170 music acts of different genres take over an epic, long weekend.

This year’s lineup was a bit of a surprise for frequent attendees, with multiple headliners coming from the rock genre compared to lineups from the past decade. Though this year’s lineup received mixed reviews on social media, Lollapalooza attendee Ally Ward had something to say about it.

“If you want to complain about this festival, don’t come because it’s an amazing time,” Ward said.

Thursday’s lineup tended to rely on different subgenres of rock and indie. The earlier acts on the north side of Grant Park consisted of indie-rock band Last Dinosaurs, alt-rock musician Sam Fender and alt-rock band Inhaler.

Soon after, down at the south stages in Grant Park, rising indie-popstar Maude Latour and indie-rock band The Wombats made an exciting return to Lollapalooza.

“I don’t think we knew a lot of them, but we just kind of stumbled across some good ones,” Lollapalooza attendee Dawn Schwetz said, specifically pointing out Niko Rubio and Last Dinosaurs.

The day wasn’t just for the rock lovers though, as the festival also hosted a variety of artists at the T-Mobile Stage. Rappers like Redveil, Pi’erre Bourne and Lil Baby gave rap lovers plenty to cheer for as each of the sets were spread out throughout the day.

The classic Perry Stage hosted an array of DJs and EDM artists who never failed to keep the energy high and the crowd entertained.

Hyperpop duo 100 gecs, made up of Dylan Brady and Laura Les, a 2018 audio arts and acoustics alum, returned to Chicago with an entertaining performance involving acoustic guitars, slingshots and a cool yellow wizard hat.

Metallica ended the night with nothing but the classics. Fans of all ages enjoyed the show and found the thrill in joining mosh pits or just drinking a room temperature Miller Lite.

Fans jammed out to all of their classics like “Enter Sandman,” “Whiplash” and “Seek & Destroy,” but of course Metallica had to give a nod to their new fans coming from the hit show, “Stranger Things.”

With the iconic scene of Eddie Munson saving the world behind them, Metallica treated fans to a special performance of “Master of Puppets” to end the first day of Lollapalooza.