Bands like Blink-182, New Found Glory and Green Day gained notoriety in the ’90s, marking an explosion of pop-punk that saw a growing wave of bands in the scene gain mainstream popularity as a light-hearted rock genre. The sound of the genre evolved over the next decade, trading fun and goofy antics like Blink-182’s dick jokes for more emotive lyrics as pop-punk entered what those who were along for the ride will remember as the “pizza pop-punk” years. Marked by the popularity of The Wonder Years’ lyrics on Tumblr, this period would see artists experimenting with more hardcore influences and drifting towards more mature songwriting. Pop-punk was in the midst of this era-defining transition when Joyce Manor entered the scene in 2008. And while this would mark the beginning of the end of pop-punk’s golden era, it was only the start of Joyce Manor’s success, which now finds the Southern California-based trio on tour in support of their most recent album release, starting right here in Denver. 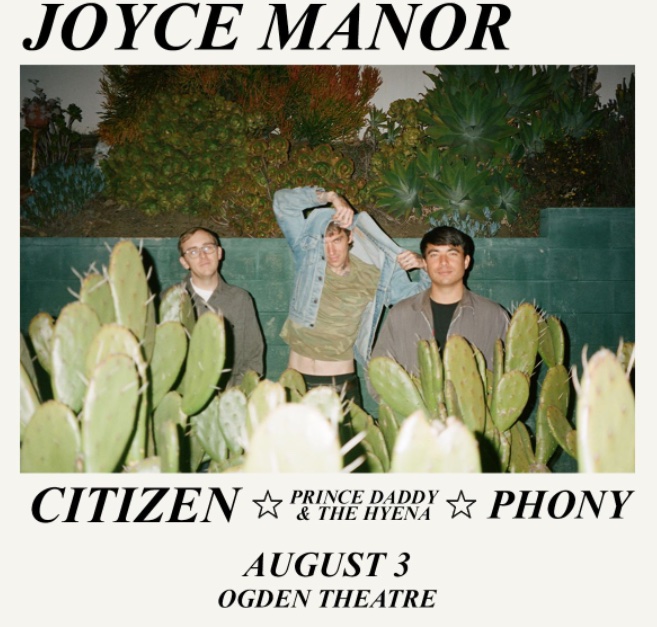 Over the last 14 years, Joyce Manor has released six albums, the most recent of which, 40 oz. to Fresno, was just released in June, which will make this week’s tour kickoff show the first opportunity for fans to hear the songs live since the album release. Clocking in at just over 15 minutes, the album rips through its nine tracks in a frenzy, with only the album’s opening track, “Souvenir,” lasting longer than two minutes.

This Week in Concerts – Machine Gun Kelly, Backstreet Boys, The Chicks and More

Within the rapid-fire track listing, frontman and vocalist Barry Johnson’s identifiable vocals push his cynical and snarky lyric writing to the forefront of each song, giving fans everything they’ve come to expect and love about Joyce Manor. And while the album races to its end, the experience is exhilarating — and with Joyce Manor’s commanding stage presence and performance capabilities —the listening experience will only be amplified in a live setting.

But even though Joyce Manor’s headlining set will likely be the highlight of the night, it’s not the only act show-goers should look forward to. PHONY, Prince Daddy & the Hyena and Citizen will all be opening the show, making it an event you’ll want to show up early for.

Though still largely unknown, multi-instrumentalist PHONY is quickly winning over fans with his own brand of grunge-infused indie. And when he isn’t performing as a solo act, fans might see him on stage a second time in the evening, providing vocal and guitar support for Joyce Manor.

Taking pop-punk back to its roots, Prince Daddy & the Hyena are pure fun. But don’t let the peppy beats and fast tempos fool you, with a discography riddled with nihilist lyrics and rock roots, the New York-based group is still more punk than pop.

Veterans of the pop-punk scene and fans of the genre needn’t any introduction to Citizen. The midwest-born emo group’s soft shoegaze style draws its inspiration from indie artists and ’90s grunge. But even though they’ve released a handful of full-length albums since forming more than a decade ago, the band is still most well-known for its 2013 release, Youth, which holds iconic tracks like “The Night I Drove Alone” and “How Does It Feel.”

Joyce Manor headlines The Ogden Theatre on August 3, along with support from PHONY, Prince Daddy & the Hyena and Citizen. Doors open at 6 p.m. Tickets for the show are available via AXS.